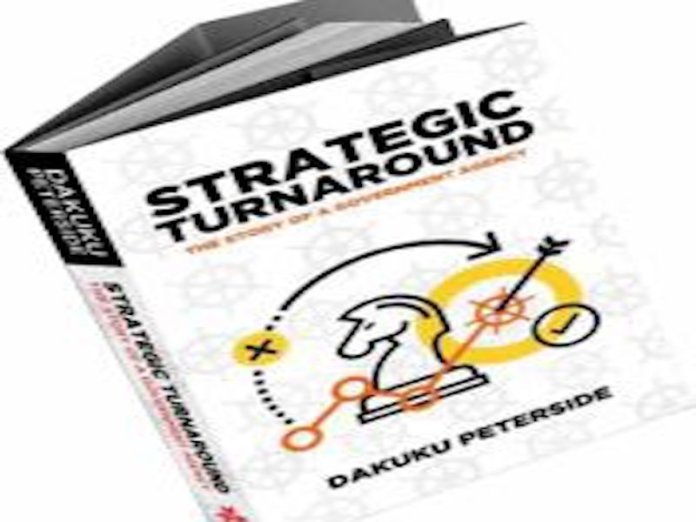 This is a special book that can transport you to the inner workings of government institutions and how they can be reformed and repositioned to deliver effective and efficient services . Every person who reads this book will be inspired by its unique approach to solving complex institutional problems, applying simple management and leadership principles in an easy to understand manner.

This important book by Dr. Dakuku Peterside on Strategic Management turnaround demonstrates several important theoretical, policy and practical principles well laid-out in the different chapters. For one, it points attention what is currently lacking in Nigerian public life, which is the need for those who manage public assets to share their experiences and knowledge at the expiration of their tenure. This book does that with considerable diligence. It is an important case study of how to reform and revitalise an ailing public enterprise and in so doing, bring them back to top- level performance.

Second, the book shows the nexus of theory and policy in the understanding of Strategic Management. The author understands both the theory and concepts of strategic management, which undoubtedly contributed to the success of the big reform that he envisioned and executed at the agency. The practical lesson here is that we will do well for the country by appointing subject matter experts and those with requisite capacity to the headship of economically critical agencies.

Third, this book is a balanced mix of theory and practice and therefore provides sound knowledge for students, practitioners, leaders and politicians all in equal measure. From different perspectives, every intellectual mind and those in managerial function have something to take away .

In this book, I believe Dakuku succeeded well in doing what he set out to do, that is, turnaround an under-performing state institution into “a model maritime administration for developing countries”.

The author seeks to capture and document in this book, the main essence of the four years that he spent at the helm of NIMASA as chief executive CEO. He traces the challenges, the triumphs and the process outcomes of a well-thought out set of reforms. It takes the reader into the workings of a critical public institution. The focus of his thesis is on how regulatory institutions should regulate and not be captured by the political powers that birthed them. For the most part the Achilles Heel of public agencies is regulatory capture in a Spoilt System such as we often find ourselves.

In economic theory, regulatory agencies are themselves dominated by the industries or powerful interests that they are set up with regulating. The result is that an agency, charged with acting in the public interest, instead acts in ways that benefit the political actors or industry owners it is supposed to be regulating. This is prevalent in developing countries such as we are due to significant levels of poverty that in turn bestow political office holders a larger-than-life status. Clearly, Dakuku’s reform focus helped stem regulatory capture, which is a corruption of power, and authority that occurs when a political entity, policymaker, or regulatory agency is co-opted to serve the commercial, or political interests of their constituency. In Nigeria, these are mostly sub-national ethnic groups, represented by a particular geographic area or tribal affiliations. This book serves us a rich menu of lessons to prevent regulatory capture.

The turnaround of NIMASA equally shows the critical importance of investing in broad and specific skills and knowledge capabilities if national agencies will meet the demands of the 21st Century. The need for competent staff and expertise, competitive salaries, and management autonomy. The management requires assured political cover for the CEO to make tough decisions and carry out bold structural changes; these are some of the imperatives for the emergence of a credible agency and the framework with which to create a culture of performance.

Clearly, Dr. Dakuku built a solid foundation on which NIMASA could thrive and prosper in the years to come and as he set out to do, become an excellent maritime regulatory agency. The turnaround of NIMASA shows clearly that with leadership that is visionary and purpose-driven, blessed by committed workforce to implement well laid-out plan, a regulatory agency can carry out its purpose even within an environment of a Spoilt System. As a corollary, it is also evident that state enterprises and public institution that were mismanaged could experience a radical turnaround. I highly recommend this book to students of management,leadership, policy makers, politicians and academics alike.
––Prof Oyelaran-Oyeyinka is the Senior Special Adviser to the President on Industrialisation, African Development Bank (AfDB), Abidjan.