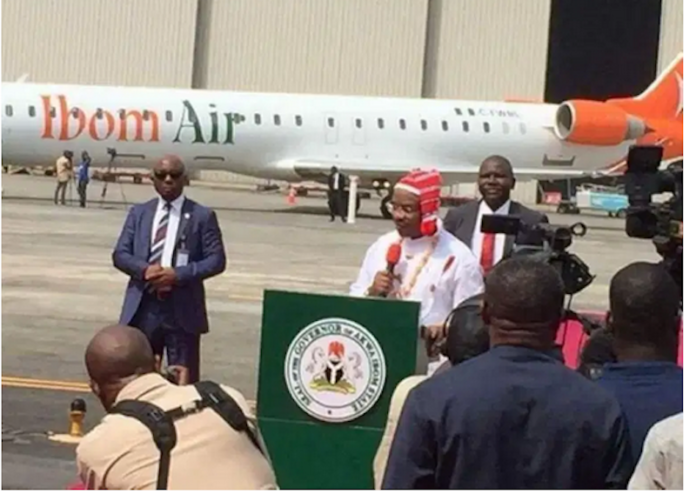 Felix Adeose
A viation development is one of the cardinal programmes of the eight-point Completion Agenda which Governor Udom Emmanuel of Akwa Ibom State set out to execute in his second term. A carry over from the first term, the programme is one of the many the governor is using to actualize his vision of making the state an investment destination and, ultimately, Nigeria’s industrial hub.

The aviation development programme is two-pronged. It involves building the required infrastructure that would support the growth of the industry in Nigeria in general and, in particular, open up the state for business, as well as making Akwa Ibom an active participant in that process through ownership of a viable airline that would play the strategic role of taking the state to the world and bringing the world to the state.

The state government has been focusing attention on the development of the Victor Attah International Airport in Uyo, to bring it up to the standard at which it would take advantage of its strategic location as a Nigerian gateway to the Gulf of Guinea to help drive the state’s economy. A major feature of this development is the ongoing building of a new terminal to serve the growing number of passengers that pass through the airport, and to give it the capacity to handle international operations.

The new terminal is designed to meet the highest intelligence, smart standard and also match the best airport terminals around the world. “We are going to have the smartest airport terminal building in the whole of Africa and that is under construction”, Governor Emmanuel said last year. This is in line with his vision of making the airport the aviation hub for West Africa.

An indication of the feasibility of this vision is the fact that the government has awarded a contract for the construction of the maintenance, repair and overhaul (MRO) facility – a major component of the airport – to the take the project, which commenced under a previous administration, to its final level. There is a commissioning deadline of December, 2021 for the new terminal building, to allow for commencement of international operations in the first quarter of 2022.

“These two projects are going to facilitate the emergence of the Victor Attah International Airport as an important feature of the Nigerian aviation industry, especially the MRO facility”, says Kayode Fashola, an aviation consultant.
He said the MRO is of particular importance because at the moment, there is no such facility in the whole of West Africa. “The absence of an MRO facility in Nigeria and the West African sub-region has had very negative effect on the aviation sector, and has actually contributed to the death of many airlines. From what I know of the one the Akwa Ibom State government is building, it is going to be equipped with the most modern facilities that will allow for local repair and maintenance of aircraft”. He said the benefits of getting the MRO facility to come on stream were enormous. “It will save the country scarce foreign exchange, create jobs, reduce maintenance cost for airlines and make the sector more attractive for investors”.

Ibom Air Comes into the Picture
The establishment of Ibom Air on June 7, 2019 – the first airline to be set by a state government in Africa – was the government’s bold move to enhance ease of travelling into and out of Akwa Ibom, beyond provision of infrastructure at the Victor Attah International Airport. It is part of efforts to open up the state to make it accessible to visitors and investors by air, land and sea, thus underscoring the government’s determination to make it a destination of choice.

The move to set up the airline was considered in many circles as risky and, among critics and cynics, an undesirable and wasteful investment, considering the notorious failure of governments to successfully run enterprises, especially airline business, with the defunct Nigeria Airways as an example. But in less than two years, Ibom Air has proved to be a success story and a wise investment decision.

The airline has, in the relatively short period of its existence, carved a niche for itself, winning the hearts of air travelers who are forthcoming in pouring accolades on it for high quality services, professionalism and discipline. The airline has come to be noted for sticking to flight schedules, thereby making it possible for its customers to keep appointments.

Wale Adeniran, a Lagos-based legal practitioner, has made Ibom Air his preferred airline because of his experience with the carrier, which has bolstered his belief that government-owned enterprises can be run successfully if they are devoid of political control and interference. “I handled a case for a client in Uyo in the latter part of 2019 not quite long after Ibom Air was set up and discovered, after traveling with the airline on three occasions, that I could fly into the state on the morning of the case and fly back to Lagos after the matter has been dealt with”, he said. “It saved me the cost of staying in hotels for a case that might not last longer than one hour”. He uses the airline on his regular trips to Abuja.

The skepticism that trailed establishment of Ibom Air, which bordered on whether or not it would be run as a government parastatal or a business, has since given way to enthusiasm, belief and hope, going by the success it has recorded so far. This is because from inception, the airline has been run as a business, devoid of government interference. “We want to run Ibom Air as one of the most efficient, economically viable and profitable outfits in a way that will make others come to copy our business modules”, Governor Emmanuel had assured.

The success story of the airline is evident in the fact that with five aircraft in its fleet, it is currently operating flights to Abuja, Lagos, Calabar and Enugu, with plans to cover more airports in the country as it progresses. The ambitious plan of making Akwa Ibom an investment destination would see the airline expand operations to Ghana, Cameroun, Gabon and Equatorial Guinea, when the new terminal building is completed.

The economic benefits of the two iconic aviation projects – the airport and the airline – to the people of Akwa Ibom are unquantifiable. The projects are going to play the combined role of opening the state to investors to come in and take advantage of the conducive investment climate the government has created. There is going to be increased investment in different sectors like manufacturing, agriculture, health, hospitality, etc., in all parts of the state. This would translate into rapid development of the rural areas, thereby discouraging rural-urban drift.

Increased investment will boost the job creation efforts of the government, thereby reducing unemployment. There is also the potential of making essential goods and products available, with the high possibility of affordability.
With more people in employment, there is going to be improvement in the standard of living of the people – a development that may encourage the state’s indigenes in other parts of the country who are not doing so well to find the state an attractive place to go back to.