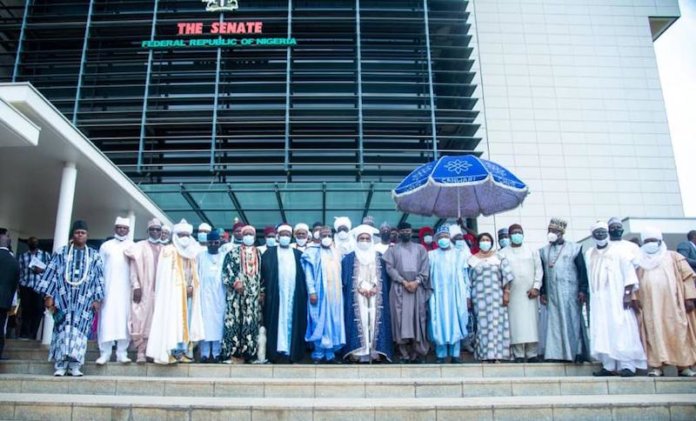 The traditional institution is an integral part of every community as it plays significant roles as custodian of culture, norms and values while it also supports government in maintaining peace and order.

In view of this, the National Council of Traditional Rulers in Nigeria, led by the Coordinating Chairman of the Council, Etsu Nupe, HRH Yahaya Abubakar, recently met with the Senate President, Ahmed Lawan to demand for the reinstatement of its roles in the Nigeria constitution as the constitutional review is ongoing.

While presenting the memorandum, signed by the Chairman of the National Council of Traditional Rulers of Nigeria, His Eminence, Alh Muhammad Sa’ad Abubakar, the Sultan of Sokoto and the co-Chair, His Royal Majesty, Oba Adeyeye Enitan Ogunwusi, Ojaja II, Ooni of Ife, to the Constitution Review Committee, the Etsu Nupe, His Royal Highness, Alhaji (Dr.) Yahaya Abubakar recalled that the Nigerian First Republic Regional Governments had bi-cameral Legislative arrangement with the Houses of Chiefs serving as the Upper chambers to those of the elected Houses of Assemblies.

“The society was at that time progressive, peaceful, decent and full of beautiful traditions and cultures. Lives and properties were sacrosanct and accountability and honesty were the hallmarks of the traditional local administrations,” he said.

The Etsu Nupe lamented that under the present arrangement, “Traditional Rulers do not have the Constitutional or other legal backing to perform effectively as they are not even mentioned in the 1999 Constitution.

“This is a great departure from all earlier Constitutions that recognised them and even gave them some functions to perform.”

The traditional ruler stressed that no community or nation would thrive successfully without due consideration of its historical evolution, customs, values and beliefs.

“This will translate into its ineffectiveness in performing its roles. It will also affect its capacity to mobilise the people towards government’s programmes and projects and in managing communal, ethnic and religious conflicts and crisis.”

He advised that Traditional Rulers should be accorded specific responsibilities for conflict and security management in their domains.

“One thing I want you people take home is that, although you all are distinguished members of the senate, little do you know that after your retirement, you could become the next king of your community and the reason why you have to play a part in reviewing the role of the traditional institution in our constitution”, Chu said.

King of Nembe Kingdom, HRM Edmund Daukoru, on his part, said the nation cannot be complete without the traditional institution being recognised for the roles it has been playing for centuries.

The traditional rulers insisted that if all the demands contained in their memo were granted, most of the challenges in the present day will be tackled.

President of the Senate, Ahmad Lawan, expressed belief that the traditional institution needs to be given constitutional roles to combat issues like insecurity in the country. “I’m here to show the commitment of the National Assembly in its entirety, to listening and supporting our royal fathers on the Constitutional Review currently going on, and in what many of us believe that is the right thing; that we have our royal fathers properly and formally given some roles in the governance structure or the administration of our country.

Lawan stressed that the current security architecture should not be limited to the armed forces, police and other paramilitary organisations alone, adding, “actually, what we need is to secure the lives and properties of our people.

“How do we achieve that? This is where the meeting of today, between our Constitution Review Committee headed by the Deputy President of the Senate, and the National Council of Traditional Rulers would be very critical.”

Leadership of the National Assembly, however, gave assurance of its commitment to ensure that the mission of the traditional rulers is achieved.