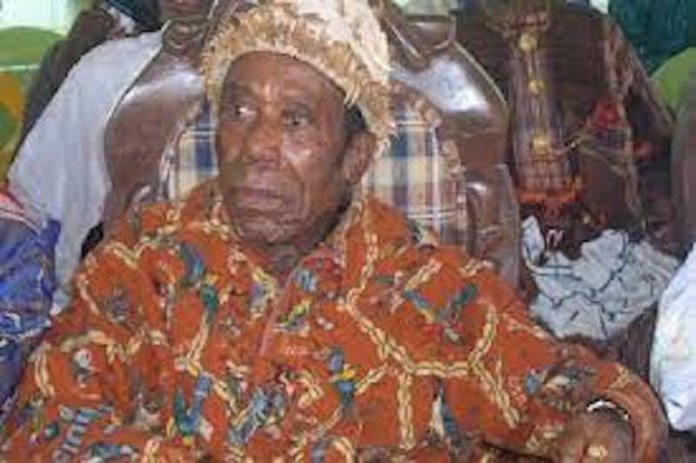 Olawale Ajimotokan in Abuja
The Aro National Rites of Passage Committee has disclosed that the Eze Aro of Arochukwu, Mazi Ogbonnaya Okoro, will be buried on April 5, 2021.

The Chairman of the committee, Prof Okoro Ijoma said Friday at a virtual media briefing on the transition of the immediate past Traditional Ruler of Aro Kingdom and custodian of its heritage.

The burial will climax a week-long passage of rites for the late first-class monarch, which begins on April 2.

The official funeral announcement made available to journalists read: “The Aro Kingdom, Abia State of Nigeria hereby announces the passage of the custodian of the Aro heritage and Eze Aro of Arochukwu, His Majesty, Mazi Ogbonnaya Okoro, CFR.

“Eze Ogbonnaya Okoro joined our ancestors and the Aro saints after a brief ‘ovia uwasi’.

The climax of the funeral rites will be held at the Arochukwu Civic and Cultural Center, Oror, Arochukwu by 10 am.

Ijoma said the burial rites of the late Monarch will be an opportunity to celebrate him.

He described the late traditional ruler as a shining light in many ways. He said Arochukwu had a lot to show for it during his 25 years reign as he used every opportunity to lobby for the welfare of his immediate community and to improve the quality of the road network of Aro.

“We are mourning in one form, and in another form, we are celebrating him and Arochukwu, which he represented and still represents. Under him, an imposing civic centre was completed for you to know that Mazi was a great ruler and the event of next week is to celebrate him and to celebrate Aro and to celebrate what monarchy in Aro stands for,” he said.

Before ascending the throne, Mazi Okoro, who trained in the UK as a Medical Laboratory Scientist, was the pioneer head of Department of Laboratory Technology at the University of Nigeria Teaching Hospital, Enugu.

He retired as the Chief Medical Laboratory Scientist at the University of Nigeria, Nsukka in 1988 to ascend the throne.

Eze Okoro ascended the ancient traditional stool of Aro in 1995 and his reign witnessed tremendous transformation of the Kingdom and growth in inter-communal relations.