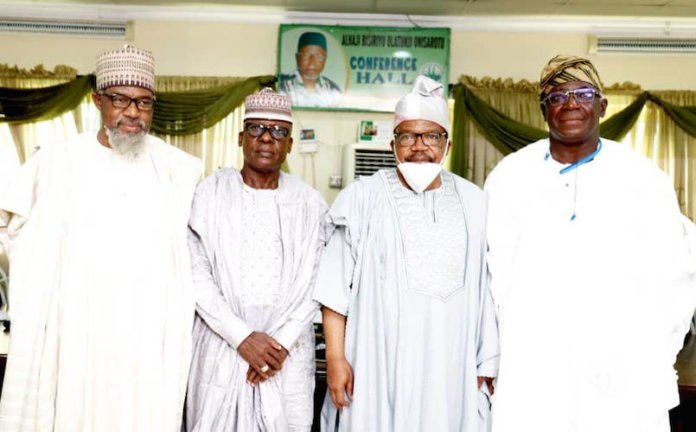 Armed with its mission of establishing a citadel of learning that produces strong minds that are sound in academics, character, and the fear of God, the Ansar-Ud-Deen Society of Nigeria, recently, appointed the Chairman lBEJI Foundation, Alhaji Rafiu Adisa Ebiti as it’s Pro-Chancellor/ Chairman Governing Council of Summit University, Offa, Kwara State. Sunday Ehigiator reports

Members of the academia and Islamic clerics under the umbrella body of Ansar-Ud-Deen Society of Nigeria associated with the faith-based Summit University, Kwara State, recently, converged on Ansar-Ud-Deen Central Mosque, Surulere, Lagos, to chat a new path for the university which recently produced its first sets of graduates.

Known for his strong principles of discipline, dedication, and accountability, Alhaji Ebiti has left his footprint in management, and humanitarianism, with countless indigent students benefiting from several of his scholarship initiatives under his Ibeji foundation in various Nigerian universities.

“Ebiti’s nomination was based on merit and in line with the provisions of the Summit University regarding the qualifications and qualities of personalities to be appointed into different organs of the university.”

He said Ebiti and his team definitely, have a daunting assignment before them to nurture the new university to maturity, adding that global prominence and acceptance is a herculean task which requires experience, sacrifice, dedication, focus, integrity, serious mindedness and total cooperation of all members.

“I have no doubt whatsoever that the chairman and his team have what it takes to achieve the mission and vision of the university. I wish to assure you of the total cooperation and understanding of the office of the president and the NGPC/national executive committee which I am privileged to lead,” he said.

In his acceptance speech, the new Pro-Chancellor promised to work in line with the ideals for which the university was set up.

He noted that the council would work seamlessly with other appointed members of it’s Board of Trustee (BoT) headed by Lagos State former Commissioner for Finance, Dr. Rotimi Oyekan and promised to create for the institution, a legacy the world would be proud of.

In an interview with THISDAY, Ebiti thanked the Ansar-Ud-Deen Society of Nigeria, and acknowledged the challenge ahead of him saying that they are not insurmountable.

According to him, “I am grateful to God for the opportunity, and I pledge that there will be significant changes. This is a university with many faculties and so many disciplines; we will look at what is on ground, see how we can improve on it and create new things.

“Faith-based universities have their models, and they have their own challenges too. Sometimes, some of these models may not really be what the society at large wants. But then, those models are based on the perceptions, the teachings of the Quran, and the Sunnah of the holy Prophet. It shouldn’t be too difficult to get some of these things done once you can find consensus and good leadership.

“The challenge always is the quality of leadership, and I can tell you that I am very confident in the leadership of the institution and the BoT. I know the chairman of the BoT very well, I have worked with him before now, and I believe in his capacity and that of the team, and I don’t anticipate any challenge working with him.”

Speaking on the appointment of Ebiti as the university’s Pro-Chancellor, the newly appointed Chairman, Board of Trustee, Rotimi Oyekan, also expressed confidence in his capacity to pilot the affairs of the school.

“The pro-chancellor is a distinguished businessman, and a committed member of the society. I have no doubts that he will be able to fulfill his tasks. The interface with him is almost seamless and it is very important. So, we will be working with them to ensure that they execute to the later, the vision and mission of the society,” he stressed.

On his decision to make scholarships available for a number of indigent students in the school, Oyekan noted that the society in itself “has a record of sponsoring scholarships through primary, secondary and higher institutions in different parts of Nigeria.

“It is in that spirit that the idea of Summit University was incubated, and prosecuted to the glory of the Almighty Allah. And we believe that the quest to improve access to education for the Muslim child is very important in present day Nigeria.

“It makes this a big task, but we believe that we will be able to make an impact to the glory of God. Significantly, we must mention that there is no discrimination in Ansar-Ud-Deen schools. It is a school that trains Christians and any other religion you may belong to. The culture is to provide educational opportunity, and bring out the best in students that we have the opportunity in training,” Oyekan said.
The University Registrar, Mustapha Kadiri expressed optimism that it is moving to greater heights in all ramifications.

“Even before his appointment as the Chairman of Council of the University, Ebiti has given scholarships to about 25 students, and followed this up by sending us experts from his company to provide mentorship to these students. So, for somebody with that kind of background and passion for education, I have no doubt that he will be able to move the university to greater heights,” he said.