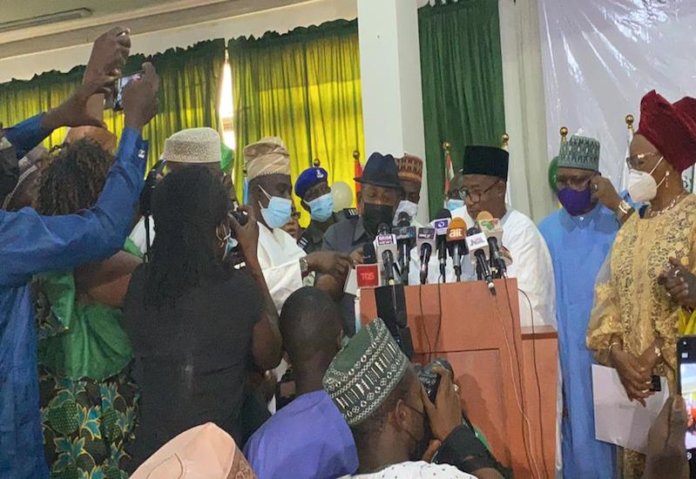 The Peoples Democratic Party (PDP) yesterday said it had not yet decided on the zone that would produce its candidate for the 2023 presidential election.

The party’s Governor Bala Mohammed-led Committee on the Review of the 2019 General Elections had rattled some sections of the country by recommending that the PDP should throw open the contest for its 2023 Presidential ticket.

The Chairman of the committee said: “We think that every Nigerian from every part of the country should be given the opportunity to choose the best candidate through a credible primary election as a way of institutionalising a merit-based leadership recruitment process for the country.”

But in a swift reaction yesterday, PDP’s National Publicity Secretary, Kola Ologbondiyan, stated that the party had not adopted any of the recommendations of the Bala Mohammed-led Committee, including that of zoning its presidential ticket.

He said: “Due to enquiries from our members and the general public, it has become imperative to clarify that PDP is yet to adopt any of the recommendations proposed by the Bala Mohammed‘s Committee on the Review of the 2019 Elections.
“As such, it will be incongruous for anyone to assert that any decision had been taken by PDP on the zoning of the presidential ticket ahead of the 2023 general elections. Members and supporters are enjoined to note that the party is yet to take any decision on the proposals presented by the committee.”

Also yesterday, the PDP committee that recommended throwing open its 2023 presidential ticket clarified its position, noting that it was not looking for a tribal or regional leader but a nationalist who would unify the country.

The secretary of the panel, who is also the Deputy National Secretary of the PDP, Dr. Emmanuel Agbo said the panel in reaching its decision took cognisance of the crisis facing Nigeria, “and what is needed now is a detribalised Nigerian, not a regional leader. We need a unifier similar to what happened in 1999 when Olusegun Obasanjo emerged the presidential candidate of the PDP.”

Agbo, who spoke yesterday on Arise News, explained that the crisis facing Nigeria ranging from insecurity, disintegration, collapsing economy, inflation and unemployment deserves a Nigerian “who would serve as a unifier as former President Olusegun Obasanjo did in the days after the annulment of the June 12 1993 Presidential election.”

He said: “We are in a dire situation as was the case after the annulment of the June 12 1993 Presidential Election. Nigeria was in the precipice of disintegration and all Nigerians looked in the direction of a leader who can pull back Nigeria to a nation. This is what we are looking for, a nationalist who is a unifier to pull back Nigeria from disintegration.”

“Our recommendation does not in any way preclude the South-east. It does not foreclose it going to the south. We just need a leader that would rescue Nigeria from disintegration.
“Again, it is like a political solution that happened in 1999 when Chief Olusegun Onasanjo emerged. We need a purposeful leader; a detribalised Nigerian that can come from anywhere. He can even come from the south. The trouble in Nigeria is overwhelming, we are not thinking of a regional leader. We are looking for a true nationalist who will put Nigeria on a reverse gear from this present situation that we find ourselves.

“Does zoning of the presidential candidate of the PDP solve the present crisis in Nigeria? Does zoning solve insecurity, provide employment and improve the state of the economy? Can the present situation bring back ourselves to one nation that we used to be? Throwing the presidential ticket of the PDP open does not shut any zone out. The present situation calls for a true nationalist.”
On restructuring, he said the PDP believed in restructuring, as it was under a PDP government, led by President Goodluck Jonathan, that the 2014 national conference report was midwifed: “PDP believes in restructuring with devolution of power and authority with the basic aim of redeeming the goals of Nigeria as a nation,” Agbo said.