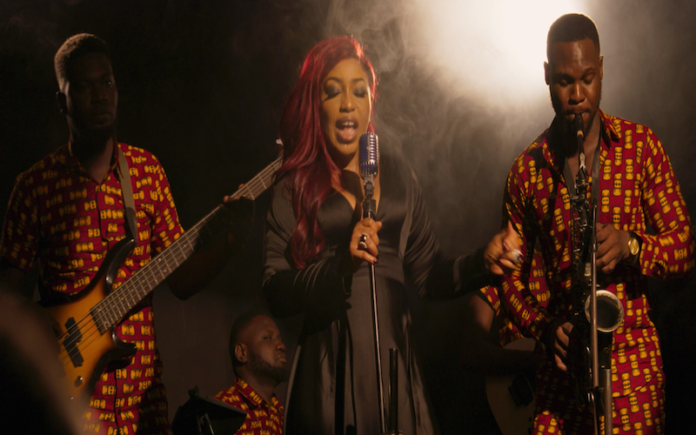 After their outing in the 2012 film ‘The Meeting’, the trio of Mildred Okwo, Rita Dominic and Tunde Babalola reunite in a new blockbuster. This time, they showed their mettle in the neo-noir film ‘La Femme Anjola’ released in cinemas today. The film revolves around a stockbroker who fell in love with a mysterious woman.

Starring Dominic and Nonso Bassey in leading roles, the film explores the extremities of love and blurs the lines between heroes and villains.

Dominic is the titular character Anjola, a woman as sultry and mysterious as her looks. On the surface, she dons a pretty face, but beneath it, is an enigmatic persona that traps the viewer in her world till the last scene. She is married to a wealthy gangster Odera Kalu (Chris Iheuwa) who owns a nightclub, Bassment, where she performs with a band. This is Anjola’s world. A place where many fall at her feet.

Her co-star Bassey brings a certain kind of vulnerability on the screen that it is hard to box him into a particular character profile. He is a rich stockbroker and a saxophonist. He has a beautiful girlfriend Thabisa (Mumbi Maina), yet his eyes are set on an irresistible and forbidden woman. Irrespective of the prism you view him from, he is evasive as the plot thickens. Each character seems to have a dual personality.

But this is the hat-trick of the director; building blocks of suspense in each sequence, after all, what is a neo-noir film without mystery. On receiving the script written by Babalola over five years ago, Okwo and Dominic were instantly convinced that this is the kind of film their company The Audrey Silva Company will invest in.

Okwo works magic with the film’s direction. She propels the narrative with more action than dialogue, guiding the actors to interpret their roles from the depth of their creativity. The cinematography is dark and shadowy; and with the craft of architect and fashion designer Kelechi Odu, the imaginary world becomes visually striking.

Multi-layered with themes that border on love, power and greed, the ultimate message of ‘La Femme Anjola’ resides in the titular character: beauty has different shades of entrapment. The film also stars Femi Jacobs, Ego Boyo, Paul Adams and Shawn Faqua among others.