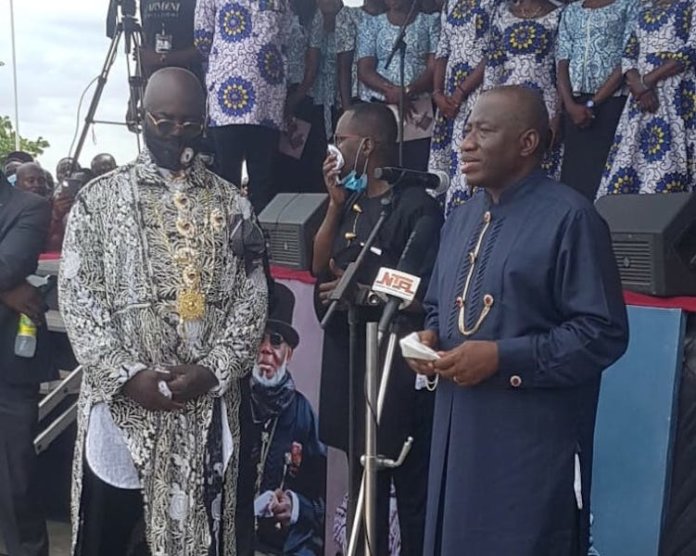 As the Paramount Head of Oruwari Briggs War Canoe House of Abonnema, late Chief Olu Benson Lulu-Briggs, was laid to rest last week, Chiemelie Ezeobi reports that the week-long ceremony included an evening of drama, tributes, art exhibition, and boat regatta, among others, for the nationalist, industrialist and renowned philanthropist

For Paramount Head of Oruwari Briggs War Canoe House of Abonnema, in Akuku Toru Local Government Area of Rivers State, late Chief Olu Benson Lulu-Briggs (OON), his onward journey to the great beyond was a week-long ceremony filled with an evening of drama, tributes, art exhibition, and boat regatta before he was laid to rest in his hometown.

The late politician, industrialist and oil mogul, who was known for his philanthropy and nationalism,

was also the Iniikeiroari V of Kalabari Kingdom and Opomulero of Ijero Ekiti in Ekiti State, thus his funeral witnessed all the glitz and glamour fit for a king.

The week-long ceremony began on Monday, March 8, 2021, with an evening of drama, tributes and art exhibition at the University of Port Harcourt.

Speaking during evening of drama, tributes and art exhibition, acting Vice-Chancellor of UNIPORT, Professor Steve Okodudu, stated that the death of the university’s “benefactor, patron, father, and Alumnus is certainly a direct tragedy for the University of Port Harcourt. This is because of the boundless philanthropy and assistance, he rendered to the university”.

Okodudu noted that the university crossed paths with late High Chief O.B Lulu-Briggs when efforts were in gear to improve on the infrastructural profile of the institution and that the lot fell on an equally illustrious son of Kalabari kingdom and then Vice-Chancellor, Professor Nimi Briggs.

He said the response from High Chief Lulu-Briggs was the building and donation of a purpose-built structure to house the University Health Centre, adding that the deceased impacted on the university in many other ways including becoming one of the foremost “benefactors and rare friend of the university,” while also endowing a “Professorial Chair and never ceased to give unflinching support to the university when approached”.

In response to his acts of kindness and support to the university, Okodudu said the deceased was awarded a Doctorate Degree Honoris Causa.

Responding to the gesture, Head of Young Briggs House of Abonnema, Chief Dumo Lulu-Briggs, said he was short of words to describe how the university organised such an elaborate programme in appreciation of what his father did for the institution, just as he also promised to reach out to the school.

The second event in the long line up of activities was a service of songs and tributes, which was held at the the EUI Centre, Plot F 11, Sani Abacha Road, GRA Phase 3, Port Harcourt.

At the event, former Senator representing Rivers South-East in the National Assembly, Senator Magnus Abe, who extolled the virtues of the deceased said: “I don’t think that High Chief O.B Lulu-Briggs woke up any morning to pray about what people will say when he dies. He woke up every day, he did the best he could, helped those he could help and did what was right for him that very day.

Speaking also, former President of the Nigerian Bar Association (NBA), Onueze Okocha, said the late founder of Monipulo Limited, touched several lives in communities in the Niger Delta through his company and the O.B Lulu-Briggs Foundation.

Also speaking, Chief Dumo Lulu-Briggs said contrary to what people might insinuate, the family left behind by their late patriarch and nationalist, remains one and will not allow what transpired before now define them.

Rachael Lulu-Briggs, who gave the tribute on behalf of the family said they popularly called the late High Chief O.B Briggs “The Last Don,” as he was a loving father who touched the lives of everybody who came across him, adding that , “God greatly blessed our father and together with his wife, they elevated philanthropy to a foundation that reached out to people from all walks of life”.

In his sermon taken from Psalm 39:4 “Lord, make me know my end, And what is the measure of my days, That I may know how frail I am,” the officiating minister and President, Christian Council of Nigeria, Most Reverend Dr. Benebo Fubara-Manuel, harped on the need to good at all times and not allow challenges of life to harden our hearty to doing good.

Fubara-Manuel, who is also the Vice President, Fellowship of Christian Councils and Churches in West Africa, praised the deceased for his philanthropy and kind-heartedness, pointing out that he used his resources to affect humanity in so many positive ways.

On Friday, March 12, his mortal remains arrived Port Harcourt. The Head of Young Briggs House and Chief Mourner, Chief Dumo Lulu-Briggs, joined by other family members, were on hand to receive the body at the Port Harcourt International Airport, Omagwa.

The convoy later moved to Buguma, headquarters of Asari Toru LGA for a brief stopover before transporting the mortal remains via the sea to Abonnema, headquarters of Akuku Toru LGA amidst boat regatta from different houses and groups. The atmosphere in Abonnema became charged when all sighted the boat conveying the corpse from Buguma.

At the Christian Wake, a magnificent stage hosted the mass choir for the which featured a full church service, the 200-man choir and other harmonious groups from the community. Tearful Tributes were given by the Staff of Monipolo and from the children to round off the Christian wake.

Then the live bands took over with the good old time MC Sagastus, and several entertainers of yore who reigned in famous hangouts and nightclubs. They included Sir Perry of the Ozigizaga fame; Rastaman Bob Kelly, the reggae master who rolled out Bob Marley tunes including the famous ‘One Love”; Baba Tony Grey who sent the audience down memory lane as he thrilled with his konga and rendered some famous Rex Lawson tunes; Chief Elenwa of the Garden City Band; Positive Man and Captain Hart, who belted out several old Ghana classics made popular by JB Danquah and Henshaw, amongst others.

On Saturday, March 13, the funeral ceremony held and torrents of tributes poured in from former

President Goodluck Jonathan; Rivers State Governor, Nyesom Wike; and First Lady, Hajia Aisha Buhari; among others, who described the deceased as a blessing to humanity as the service was conducted by eminent men of God across various denominations.

Early enough, the procession from the Oruwari Briggs House to the venue for funeral service was a show love and admiration for one of its own.

In his homily at the funeral service, the Special Assistant (Special Duties) to the General Overseer of the Redeemed Christian Church of God (RCCG) and Supervising Pastor for Rivers, Bayelsa, Cross River and Akwa Ibom States, Pastor Belemina Obunge spoke of the need to set priorities in life and for such purpose to be fulfilled.

Quoting scriptures from John 4:13-14 and Ephesians 2:10, Obunge, who is also RCCG’s International Youth Pastor, spoke of the need to create positive impact while alive, adding that such legacies have to be something unforgettable, just as he tasked those present to leave behind positive legacies like the late O.B Lulu-Briggs, stressing that “we must inspire others and have a purpose to be like Christ”.

In her tribute to the deceased, wife of Nigeria’s President, Hajia Aisha Buhari praised the philanthropic gestures of late O.B Lulu-Briggs, who she said was quite close to the first family.

Hajia Buhari, represented wife of Minister of State (Petroleum), Mrs Alayingi Timpre-Sylva, tasked the family to take solace in the fact that they were capable of keeping the flag flying and prayed God to bless and give the family peace.

Nigeria’s former President, Dr Goodluck Jonathan went down memory lane, recalling how he came in contact with the late Lulu-Briggs, pointing out that it was sad losing him.

He stressed that the deceased, who was a father to all, touched lives in so many ways, just as he prayed for Dumo Lulu-Briggs and his siblings to be able to fit into the legacies their father left behind.

Humbled by the outpour of show of love from dignitaries across all divides, the chief mourner, Chief Dumo Lulu-Briggs expressed deep gratitude and promised to do all within their powers to sustain their father’s legacies.

Defender of the Christian Faith

Born in 1930, late Lulu-Briggs elevated philanthropy to the status of an admirable act even before he founded the O.B Lulu-Briggs Foundation in 2001. He devoted a part of his resources to the service of the church, where he provided financial assistance to churches and assisted in building of church projects all over Nigeria.

In his later life, Opuda, as he was fondly called, committed himself to evangelism using the platform of the O.B Lulu-Briggs Campaign For Christ to spread the word of God to chiefs and royal fathers in Rivers State. For his commitment to the work of God, the Communion of Pentecostal Bishops (CPB) bestowed on him with the honour of Defender of the Christian Faith.