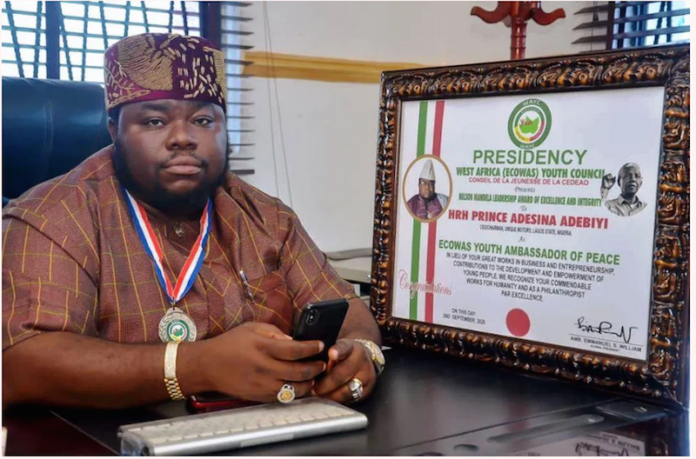 These are happy days for Prince (Dr) Adebiyi Adesina, Chairman of Unique Motors and ECOWAS Peace Ambassador. In a matter of months, the affable man has gone from being a reputable figure of business and industry to being a sky-trampling character of traditional reckoning.

Prince Adesina was recently reported to have earned himself a prestigious traditional position and title in his hometown, the ancient Kingdom of Ibadan, Oyo State. Because the man is well known and well-liked, folks did not find it incredible. Everything finally came to a head with the coronation ceremony held on the 6th and 7th of March, 2021, which cemented the gist. Prince Adesina Adebiyi has become, for all intents and purposes, the Agbaakin Majeobaje of Ibadan.

Sources report that the ceremonies were an event unto themselves as the good people of Ibadan gathered under the goodwill of the Olubadan to celebrate Prince Adesina’s ascension properly. Such was the jubilation, it is said, that folks had to be told to go home. But who can blame them? A genial character on the celebrant’s level of amiability does not get promoted to nobility every day. Besides, popular musicians Wale Thompson and Taye Currency were on stage, so there was no dull moment. And the number of industry leaders and political figures that were on site discouraged any slim intention to go home.

Moreover, the ease with which Prince Adesina and his wife stepped into their new identities spoke volumes of their inherent fitness and suitability.

For the new Agbaakin Majeobaje of Ibadan, one good thing followed another, and then another, until they were all rushing towards him. A few months ago, the European-American University (EAU) awarded him an honorary PhD title; sometime before that, it was ECOWAS. Before folks could blink, the Olubadan of Ibadan had requested his presence, and when Prince Adesina emerged, he was a Majeobaje-in-waiting. That is a blessed man indeed.