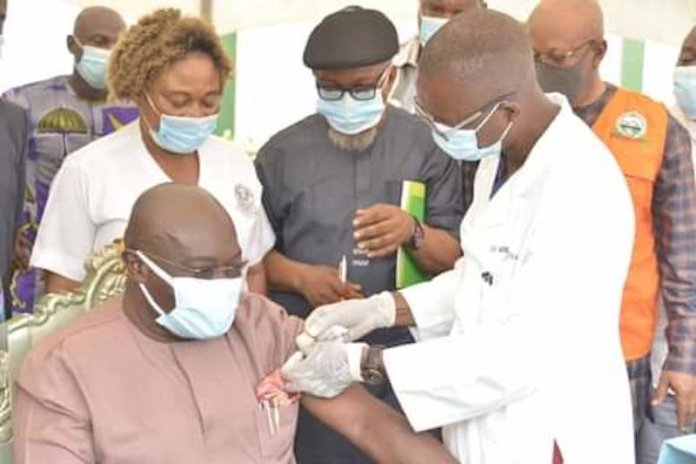 •Delta, Oyo, three others receive consignments
•No adverse reactions from vaccination, says NPHCDA
•Denmark, others temporarily suspend use of vaccine

Governors Abdullahi Ganduje of Kano State; Ahmadu Fintiri of Adamawa State; Aminu Bello Masari of Katsina State; Dave Umahi of Ebonyi State; and Okezie Ikpeazu of Abia State, as well as their deputies and other top government functionaries were yesterday administered with the COVID-19 vaccine in their respective state capitals.
Delta, Sokoto, Anambra, Kebbi and Oyo States also yesterday received their allocations of the vaccine from the federal government.

But few days after the federal government began nationwide vaccination with the Oxford-AstraZeneca vaccine to protect citizens against the COVID-19 pandemic, Denmark, Norway and Iceland yesterday temporarily suspended the use of AstraZeneca’s COVID-19 vaccine over concerns about patients developing post-jab blood clots, even as the manufacturer and Europe’s medicines watchdog insisted the vaccine is safe.

The National Primary Health Care Development Agency (NPHCDA) also yesterday clarified that Nigeria is yet to observe any ‘similar adverse reactions.’
Taking the jab in Katsina, Masari urged Nigerians to disregard rumours about the efficacy and effects of the vaccines on them.

He took the vaccine alongside his deputy, Mr. Mannir Yakubu; the State Chief Judge, Justice Musa Abubakar, and said it is certified to be safe and effective by the National Agency for Food and Drug Administration and Control (NAFDAC).
The vaccine was also administered on some of the governor’s family members as well as commissioners, special advisers and representatives of frontline health workers across the state.
Earlier, the Commissioner for Health, Dr. Yakubu Danja, disclosed that the state had received 107,540 doses of the vaccine.

He noted that the vaccines will expire by July 10, adding that the state has adequate facilities to store the vaccine safely at a temperature of 2 degrees Centigrade to 8°C at the State Primary Healthcare Development Agency.
Fintiri who took the vaccine alongside his commissioners at the Specialist Hospital, Yola, the state capital, said it is very important but not compulsory.

In Abakaliki, Ebonyi State capital, Umahi and his wife, Rachel, took the vaccine at the new Government House.
Others who also received the vaccines included the Deputy Governor, Mr. Kelechi Igwe, and his wife, Nnenna, and other members of the State Executive Council.

The Commissioner for Health, Dr. Daniel Umezurike, administered the vaccines on the top government officials.
Umahi in Abakaliki warned against commercialisation of the vaccines adding that such an act would create room for fake vaccines to flood the state.
In Kano State, Ganduje’s personal physician, Dr. Fakhraddeen Muhammad, inoculated him, pledging to kick out the pandemic like polio.
The Commissioner for Health, Dr. Aminu Tsanyawa, said the state had also provided effective storage equipment at state, local and ward levels in order to keep the potency of the vaccine.

Abia State took delivery of 61,320 doses of the vaccine with the governor, Ikpeazu, receiving the first jab yesterday.
The Commissioner for Health, Dr. Joe Osuji confirmed the delivery to THISDAY, saying that the full rollout would commence on Monday after the frontline health workers would have taken their jabs.
However, Ikpeazu was vaccinated at government house by his personal physician, Dr. Mike Enyinnaya, in the presence of government officials and journalists.

Others that later received the jabs included the Secretary to the State Government (SSG), Mr. Chris Ezem; Chief of Staff to the Governor, Dr. Anthony Agbazuere; Health Commissioner, Osuji; Chief Security Officer; Chief Press Secretary, Mr. Onyebuchi Ememanka, some security agents and Government House workers.
The governor called on all residents of the state to take the vaccine, noting that the vaccine is necessary to win the battle against the Covid-19 pandemic ravaging the world.

Delta State Governor, Senator Ifeanyi Okowa, will today receive the first dose of the COVID-19 vaccine.
The Commissioner of Health, Dr. Mordi Ononye, disclosed this yesterday in Asaba while briefing newsmen on the receipt of 85,700 doses of the vaccine by the state government and modalities for giving the vaccines meant for persons aged 18 years and above.

Meanwhile, Sokoto State government has taken delivery of consignments of the vaccines from the federal government.
Similarly officials of Kebbi State led by its Executive Secretary, Primary Health Development Agency, Mr. Ka’oje Mohammed, said the state has taken delivery of 57, 810 doses.
Anambra State Commissioner for Health, Dr. Vincent Okpala has also confirmed receipt of 78,810 doses of the vaccine for the state.
He made the confirmation at the state’s cold store at the Chukwuemeka Odumegwu Ojukwu Teaching Hospital (COOTH), Amaku, Awka.

The state took delivery of the vaccines on Wednesday night at Akanu Ibiam International Airport in Enugu, before moving them to the cold store for storage.
Meanwhile, the speaker of Anambra State House of Assembly, Hon. Uche Okafor, some commissioners and traditional rulers in the state took the vaccine, under the supervision of the state governor, Chief Willie Obiano, yesterday.
The government of Oyo State, also yesterday confirmed the receipt of 127, 740 doses.

A statement by the Chief Press Secretary to Governor Seyi Makinde of Oyo State, Mr. Taiwo Adisa, indicated that the vaccines were received in Ibadan by the Oyo State Primary Healthcare Board.
According to the statement, the Executive Secretary of the Board, Dr. Muideen Olatunji, who confirmed the development, said 127,740 doses of the vaccine were received by the state government as part of the first phase of vaccine distribution.

Denmark, Norway, Iceland, Others Suspend Use of AstraZeneca Vaccine

In a related development, Denmark, Norway and Iceland yesterday temporarily suspended the use of the vaccine over concerns about patients developing post-jab blood clots.
Denmark was first to announce its suspension, “following reports of serious cases of blood clots” among people who had received the vaccine, the country’s health authority said in a statement.
It stressed the move was precautionary, and that “it has not been determined, at the time being, that there is a link between the vaccine and the blood clots.”

On Wednesday, the EMA said a preliminary probe showed that the batch of AstraZeneca vaccines used in Austria was likely not to be blamed for the nurse’s death.
However, AstraZeneca, an Anglo-Swedish company which developed the vaccine with Oxford University, defended the safety of its product.
“The safety of the vaccine has been extensively studied in phase III clinical trials and peer-reviewed data confirms the vaccine has been generally well tolerated,” a spokesman for the group said.

In Nigeria, the National Primary Health Care Development Agency (NPHCDA) clarified that the country is yet to observe any adverse reactions.
The agency in a statement released via its official handle @NphcdaNG, explained that all side effects reported by those who have been administered with the vaccine have been mild.

It explained that the agency is aware of precautionary concerns that have been raised regarding one specific batch of the AstraZeneca vaccine, namely ABV5300.
“We understand that investigations are being conducted to determine if the batch is in any way linked to an observed side effect.
“We are satisfied that the clinical evidence indicates the Oxford-AstraZeneca vaccine to be safe and effective,” it said.