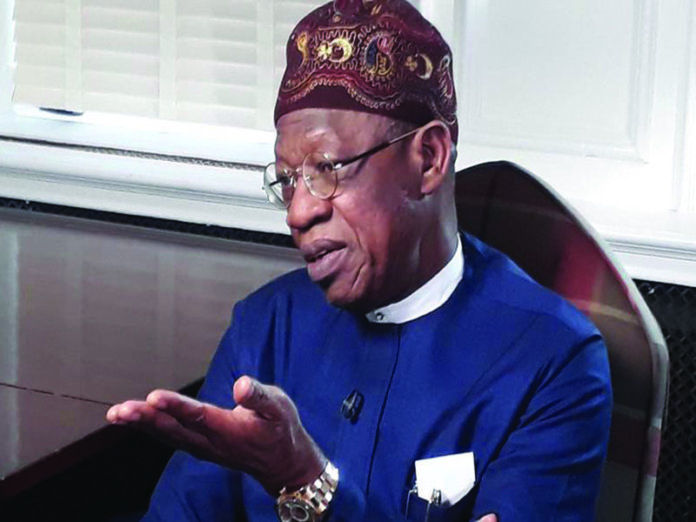 The federal government has rolled out the time table for switching off analogue signals on televisions and the transition to full digital platforms across the country.

The Minister of Information and Culture, Mr. Lai Mohammed, and the Acting Director General of National Broadcasting Corporation (NBC), Prof. Amstrong Idachaba, disclosed this yesterday at a press briefing on the time table for the Phase 2 of Digital Switch Over (DSO), in Nigeria.

Idachaba, who provided the technical details, said the first analogue switch-off is slated for May 28, 2021, in the Federal Capital Territory while Plateau, Kaduna, Kwara, Enugu and Osun States that have already linked to the DSO under Phase 1, would follow suit in June, August and September 2021 respectively.

The federal government warned that once the analogue signal is switched off, no one on the system would receive television signals anymore in the country except with the DSO approved set-top boxes (decoders).

Idachaba stated that the grace of two months, starting from yesterday has also been provided for the public to be prepared for the first switch off in Abuja.

He added that analogue switch off for the remaining five states in phase 1 that have been successfully linked to DSO is expected to be completed before the end of the year.

The NBC’s acting director general said that following the rollout, the signal distributors are expected to within the same period to complete the installation of additional transmitters and gap fillers to attain 70 per cent to 80 per cent coverage in the existing six locations in Phase 1.

He emphasised that adequate quantity of set-top boxes would be made available by the authorised decoder manufacturers for these locations.

The federal government also announced the time table for the roll-out of digital switch over under phase 2 for Lagos, Kano and Rivers, Yobe and Gombe States.

The government also said that it would allow the publics in the aforementioned states between four and five months after the switch for adequate preparedness before each state is switched off from analogue.

Idachaba assured that five additional states would be switched on under Phase 2 by the end of the first quarter of 2022. They are Imo, Akwa Ibom, Oyo, Jigawa and Ebonyi States while Phase 3 switch on is billed to commence in December 2021 and end with final the analogue switch off on December 8, 2022.

Mohammed has also assured that before the government would embark on the analogue switch off in any state, it would ensure that the Digital Terrestrial Television (DTT) signal has covered at least 70 per cent of the population in that state, while the remaining 30 per cent would be covered by Direct-To-Home (DTH) satellite signal.

He also said that the ministry of information would liaise with the Ministry of Industry, Trade and Investment to ensure the reduction in the tariff on the raw materials for the manufacture of the decoders in Nigeria in order to bring down the cost and make them affordable for average Nigerians.

He also assured that the Advertising Practitioners Council of Nigeria (APCON) and the NBC intended to sign an MoU on zero advertising debts to ensure that revenue from advertisers goes to the media owners while the federal government will also support the channel owners and content providers through the implementation of the audience measurement system to guarantee a sustained stream of revenue from advertising for them to invest in the development of compelling content.