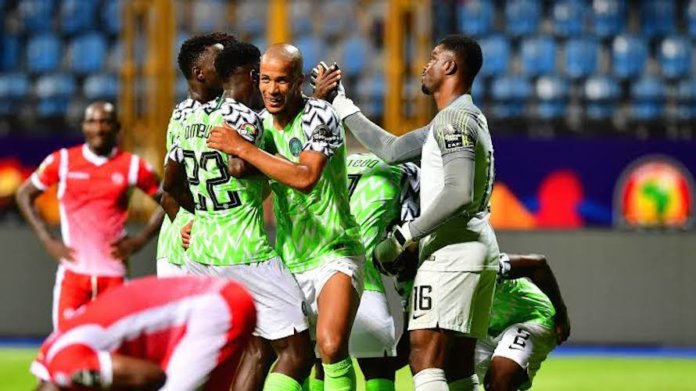 Sierra Leone’s fightback from four goals down to tie the AFCON 2022 qualifier with Nigeria 4-4 at the Samuel Ogbemudia Stadium in Benin City last November has dented the image of the Super Eagles and now cast a doubt on the ability of the three-time African champions to win in Cameroon next January.

Former Captain of DR Congo, Gabriel Zakuani insisted yesterday that the Super Eagles are not the favorite to lift the trophy in Cameroon.

“At this moment, I don’t quite feel they (Super Eagles) are ready because champions will not give away four-goal leads, so I don’t expect them to win,” Zakuani told a special edition of the BBC’s Sport Africa TV programme yesterday.

“I feel like it has come too soon for Nigeria to win it. (It’s time) for them to just be there, compete and then push on again,” observed the Congolese in dismissing Nigeria’s chances at AFCON 2022.

Super Eagles are currently top of Group L where all the teams, which include Benin, Sierra Leone and Lesotho, can still qualify for January’s finals in Cameroon.

Nigeria would have already qualified had Eagles not let slip a 4-0 lead at home in Benin City to Sierra Leone, who salvaged a dramatic 4-4 draw with two goals in the last ten minutes.

March sees the culmination of Nations Cup qualifying with the final two rounds of matches in each of the 12 groups, where 39 of the 48 teams can still go through.

So far, Algeria, Senegal, Tunisia and Mali have joined hosts Cameroon at the delayed finals, leaving 19 places left to fill.

Nigeria currently top Group L on eight points, one ahead of Benin while Sierra Leone have three points and Lesotho two.

The first match on November 27 will see Super Eagles traveling to Port Novo to take on the Squirrels of Benin Republic while Lesotho host Sierra Leone.

On the final match day four days later, Nigeria will play Lesotho in Lagos for the first time in over a decade while Sierra Leone play Benin in a game moved to Guinea because the stadium in Freetown has been prevented from hosting international matches.

While Zakuani has blamed a lack of consistency in the Super Eagles and insisted upon a need for a settled side, Nigeria forward Alex Iwobi is trying to focus on what is going well.

“The positive you can take is we are still on course to be top of the table, so we are confident we have the quality to do so and put 100% for 90 minutes this time, so we can qualify,” the Everton star told BBC Sport Africa.

“The opportunity I was given last time to be involved in that competition, I want that feeling again,” he said of his 2019 Nations Cup experience, where Nigeria finished third.

“If you are in a competition you want to win it, (and) I believe our players feel we have the quality to do so. We’d like to play in the best competitions and win them, so we have to prove that against Lesotho and Benin.”

Alongside Nigeria, the Beninois – who reached the quarter-finals two years ago – are favourites to clinch one of the two qualifying places.

While Nigeria and Benin were at the last Nations Cup, Sierra Leone were last there in 1996 while Lesotho are seeking a maiden qualification.