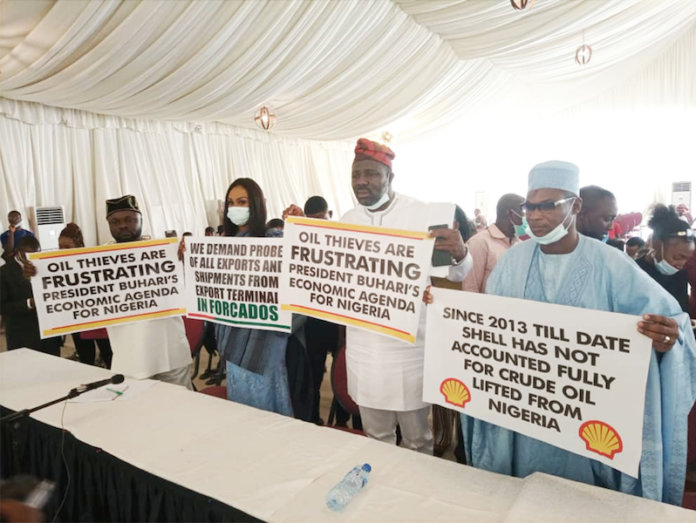 Last week, youth leaders of several ethnic groups in Nigeria converged on Abuja to pressure the authorities to take appropriate action against Shell Petroleum Development Company over alleged underhand dealings in the course of carrying out their operations in Nigeria. Emmanuel Addeh writes that it was one of the few instances that the country’s youth leaders appeared to have spoken with one voice on such a matter of national importance

The placard-wielding, tough-talking horde of youths, stormed the seat of power last Tuesday had one mission in mind: compensation for the aggrieved and sanctions for the alleged culprits.

Drawn from Nigeria’s major ethnic groups, the youth leaders who eventually gathered to address the surging crowd insisted that it was an act of sabotage against Nigeria for an oil multinational to seek to intentionally understate the volume of crude oil over a long period of time, in excess of 16 million barrels.

They argued that, if Shell Petroleum Development Company (SPDC) is allowed to go unpunished, it would set a bad precedent for other multinationals, which the aggrieved youth leaders contended have always ripped off the nation in the process of oil exploration and exploitation.

While the jury is still out as to what actually transpired and how that magnitude of crude oil could have been understated over a prolonged period of time, the issue is that between 2016 and 2018, the multinational oil company deployed a measuring device not approved for that purpose to calculate the commodity, thereby short-changing its partners and by extension the entire country.

By putting to use a metering device not approved by the regulatory agency for the petroleum sector, the Department of Petroleum Resources (DPR), the local operators insist that they lost a lot of funds to the indiscretion of the SPDC and its officials.

In trying to resolve the matter, through one of the letters written to SPDC by the regulatory agency, titled “Re: Crude Theft/Loss Allocation Methodology”, signed by U.K Ndanusa on behalf of the DPR Director, Mr. Sarki Auwalu, the agency which more or less indicted the company asked it to refund some of the alleged missing oil.

It stated that the 2 X 12” Coriolis flow meter (the controversial device) installed by SPDC at the inlet of the NCTL line into the Bonny Terminal for Custody Transfer Measurement and Allocation Purposes, was not approved by the department for the purpose and therefore was illegal.

It thereafter imposed a penalty of N250,000 on the oil giant for violation of Section 2(d) of the Mineral Oil Safety Regulation and the provisions of Section 51 of the Petroleum Act; 1969 and demanded that SPDC should return the missing crude which it said amounted to over 2 million barrels to the affected local oil companies including AITEO, Eroton, Newcross and Belema Oil.

After a long period of foot-dragging, SPDC in a letter dated February 8, signed by its Business Relations and JV Excellence Manager, Steve Okwuosah, and addressed to the DPR, agreed to return the 2 million barrels in instalments.

But AITEO disagrees with the figure and has approached the court in a bid to get the matter resolved and in part, asking for $1,275,975,000, being the amount the company said it would have sold the over 16 million barrels of crude oil at the rate of $79.50 per barrel being the prevailing price in July 2018.

However, during the protest attended by hundreds of young people, the aggrieved youths said that Shell through its action deprived the federal government of the taxes, royalties and other revenues that could have accrued to it, if the crude oil was not understated or at worst, stolen.

Members of the Council of Ethnic Youth Leaders of Nigeria, specifically demanded that the federal government should sanction Shell Petroleum Development Company (SPDC) Limited and its sister companies in Nigeria, for its complicity in the alleged diversion of the 16 million barrels of crude oil and nationalise the company’s assets.

Some of the youth leaders present at the event were Capt. Bassey Henshaw, National President of the Niger Delta Youth Council, Mr. Kabir Yusuf of the Arewa Consultative Youth Movement, Oluwadamilola Opeodu of Oduduwa Youth Council and Godwin Meliga of the Middle Belt Youth Council.

He explained that since crude oil is the major source of revenue and foreign exchange earnings, anything that affects the sector negatively affects the entire economy.

The youth leader recalled that Nigeria, being a mono-economy nation largely depends on the oil sector for its economic survival, saying that oil and gas resources from the Niger Delta region accounts for over 90 per cent of Nigeria’s export and foreign exchange earnings, and way over 75 per cent of the total Nigerian revenue.

According to him, it is indeed obvious that the increase or otherwise in crude oil production affects directly the revenue base and developmental programmes of the Nigerian state, lamenting that the same resource is being savagely stolen in copious quantities daily largely by international oil companies.

He argued that huge loss of revenues to the federal government has resulted in inadequate funding for development initiative, as a result of sabotage.

“We call on the federal government to issue an international warrant of arrest to shell officials and their collaborators, and also a Mareva injunction obtained against them until the stolen crude is determined and returned to the national coffers and the indigenous companies,” he stated.

Breaking down the Grouses

Meliga, who represented the Middle Belt and read the speech summarising the youths’ grouses, posited that Shell misdirected the federal government into expending scarce resources in monitoring and combating pipeline vandalism and oil theft, without knowing that the company was a major actor in the crisis.

Describing it as a threat and a breach of national security, the coalition disclosed that an originating summon had already been filed at the Federal High Court by them through the Patriotic Youth Organisation of Nigeria (PYON) against the federal government and all the sister Shell companies praying the court to order the government to expropriate, nationalise and take over all assets of the oil giant.

The group, which pledged their total support to the President Muhammadu Buhari economic agenda and anti-corruption stand also commended the Director of the DPR, Mr. Sarki Auwalu, for insisting that the right thing must be done by all companies operating in Nigeria’s oil sector.

The youths argued that the N250, 000 penalty by the DPR was not a recovery of the stolen crude oil or its monetary value and not a sanction against Shell for the attendant loss of revenue to federal government of Nigeria, insisting that it wasn’t commensurate with the alleged loss.

“There is the urgent need for us to bring to the attention of the relevant institutions of state to intervene and recover from Shell the full value of all the stolen crude oil, which it deliberately diverted through the use of the unapproved and fraudulent metering system.

“The company used it to deliberately understate the exact volume of crude oil injected into the Bonny Oil Terminal. Indeed, the intentional usage of the unapproved metering system by Shell was done to steal Nigeria’s crude oil and its proceeds and defraud the real owners of the products.

“Shell also used the illicit method to wrongfully appropriate to itself the crude oil revenue, which Nigeria would have made from the crude oil and unlawfully converted and retained to itself the proceeds. This is clear case of unjust enrichment,” they maintained.

Meliga posited that efforts at revamping the economy was suffering from lack of funding because Shell is deliberately sabotaging the efforts of the federal government through unlawful diversion of crude oil.

“That is why we are demanding that Shell must be made to account and pay the prevailing market value of the over 16m barrels of crude oil which it wrongfully converted and unlawfully appropriated,” the aggrieved youths added.

They noted that they had also written to President Muhammadu Buhari, the Attorney General of the Federation, the Economic and Financial Crimes Commission, the United States Securities and Exchange Commission and other regulatory bodies to take urgent and necessary actions against Shell, its officers and other collaborators.

But shell had insisted that the crude re-allocation programme between injectors into its JV’s Trans Niger Pipeline and injectors into Aiteo’s NCTL was a normal industry practice.

The company explained that, while the disputes are subject of on-going litigation, it was working to secure an expeditious discharge of the freezing injunction, which it said, it believed was obtained by AITEO without any valid basis.

“Crude allocation review and re-allocation is a normal industry practice to re-allocate previous provisional allocated volumes under the directive and supervision of DPR, and this is not an exercise resulting from crude diversion, underreporting or theft at the terminal,” SPDC noted.

It contended that the industry practice was not peculiar to the SPDC-operated Bonny Oil and Gas Terminal alone and did not translate into any loss of volumes to the federal government.

It maintained that crude oil production metering and allocation were subject to specific guidelines issued by the industry regulator, stressing that the company strictly adheres to these guidelines.