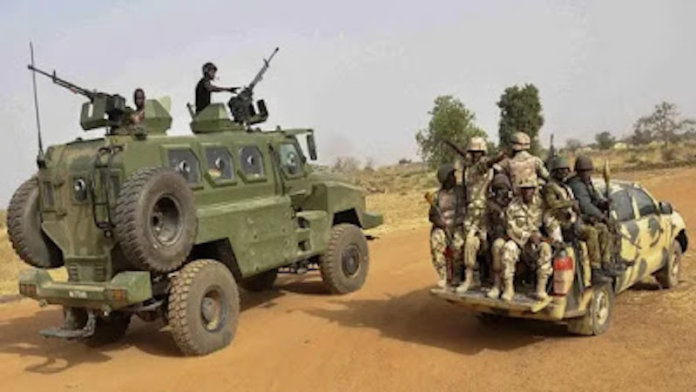 Multiple attacks by insurgents in Dikwa and Marte towns in Dikwa and Marte local government areas of Borno State forced over 100 troops to desert the Nigerian Army, THISDAY checks have revealed. The insurgents have attacked Dikwa four times since the beginning of the year, on January 30, February 20, March 1, and March 2.

The attacks had also trapped 25 United Nations workers in a bunker, prompting troop reinforcement and deployment of air strikes to repel the terrorists.

The Nigerian Army had denied reports of a mistake in an internal memo issued with regard to missing soldiers after an attack. It claimed it was taken out of context in some reports, insisting some of the soldiers have re-joined the army. But authentic official army documents point to the contrary.

An Internal memo with reference number THCOMD/G1/300/12 issued by the Headquarters Theatre Command of Operation Lafiya Dole after the attack on Marte and Dikwa on February 14 and 19, respectively, forwarded a list of over 100 deserters to commanders and directed them to arrest the men, whenever they were sighted and bring them under escort to the headquarters of Operation Lafiya Dole. The memo, which was copied to the Nigerian Army Headquarters and all Army Divisions and formations, and signed by Col. A O Odubiyi, also directed the freezing of the accounts of the deserters.

The list contained the names and bank account details of three majors, three captains, six lieutenants and 89 soldiers of other ranks.
The memo stated, “I am directed to connect Reference A on above subject and to respectfully forward details of additional officers and soldiers, who absconded from the defensive location during the BHT attack on New Marte and Dikwa.

“You are please requested to declare the named officers and soldiers deserters WEF 19 Feb. You are also please requested to cause HQ NAFC to freeze their accounts and apprehend/bring them under military escort to this Headquarters if seen within your AOR.”

The Nigerian Army admitted that such a memo was issued but said there was a mistake, because a headcount conducted after a military offensive showed an error in an internal correspondence generated by the formation.
A statement signed by the spokesman of the Nigerian Army, Brigadier-General Mohammed Yerima, said claims that 100 soldiers deserted the battlefield was unfounded. The army headquarters said an assessment carried out later showed that most of the troops had re-joined their units.

The statement said, “The attention of the Nigerian Army has been drawn to a publication in a section of the media alleging that over a 100 Nigerian troops were reported to have absconded after Boko Haram attacks on Marte and Dikwa. This publication is false, unfounded and an attempt to malign the image and character of the Nigerian Army.”
It stated further, “For the records, in the fog of war, it is a routine that head count is conducted to determine the number of men and equipment holding aftermath of military offensive. Unfortunately, an internal correspondence that was originated by the formation was not properly done.

“It was later discovered that a good number of those affected re-joined their respective units and are currently part of the on-going clearance operations.”
The statement urged the public to disregard the story, saying the subversive intent of the promoters are targeted at dampening the morale and fighting efficiency of troops.

It said, “We continually solicit especially the much-needed public support in the fight against Boko Haram. The Nigerian Army wishes to reassure the general public that troops are in high spirit and currently clearing areas infiltrated by Boko Haram terrorists/ISWAP.
“It is on record that the troops fought to defend the Internally Displaced Persons Camp and United Nations Humanitarian Hub in Dikwa. It is pertinent to also note that normalcy has returned to Dikwa and its environs.”

Military sources, however, told THISDAY that many of the soldiers were placed on the desertion list for many reasons.
A source said, “It is a routine practice. When such an attack happens, there is confusion and soldiers are scattered. Some soldiers are killed while others find themselves in places, where they lie low until it is safe to show up.”
Another source, who also spoke on the condition of anonymity, said the issue of soldiers who had overstayed in the battlefield was a major challenge.

The source said, “The issue is that the military pronounces desertion for two reasons. If you are alive and you see or hear that your name is on the list, you will make haste to return or if you refuse to return, then you have deserted and there are consequences.
“Some have overstayed in the battlefield. Some soldiers have spent six years there and have grown battle-weary, which is why the COAS promised to address it.”

THISDAY also gathered that some of the soldiers, who had suffered battle fatigue, actually deserted and sometimes left the country while others used the opportunity to rest and later return after they might have been deemed killed in action.
Meanwhile, the governor of Borno State, Babagana Zulum, has visited Dikwa for an on the spot assessment of the destruction unleashed by the insurgents.

Dikwa was temporarily recaptured by Boko Haram in a siege during the week and destroyed.
A resident narrated to THISDAY what he witnessed, saying, “Boko Haram came with four gun trucks and took over the town. The army with 11 gun trucks did not put up any fight. They simply withdrew and allowed Boko Haram overrun the town. The terrorists burnt down all the newly reconstructed buildings and killed many people and abducted some residents before they were pushed back by the military.”
He stated that most of the brand new Hilux pick-ups the governor bought for the military were either burnt by the terrorists or driven away by them.

The governor has directed the Ministry of Reconstruction and Rehabilitation to recommence immediate repairs of all structures that suffered damage, including that of military infrastructure and equipment. He also met with residents to assess the damage caused by last Monday’s attack by Boko Haram on the town and promised to provide aid for the victims of the attack.

During a Security Council Meeting in the state, Zulum lamented the refusal of the military to fight, a source told THISDAY. An obviously frustrated Zulum had asked at the meeting what else he should do?
It was after that attack that the military reportedly declared 101 soldiers as deserters. The soldiers were said to have later mobilised more troops to push the terrorists out and regained control of the town.

The governor, who was in the town on Friday to assess the extent of damage, later joined the residents for congregational prayers, after which he delivered President Muhammadu Buhari’s assurances to the people.
Zulum said, “I had a meeting with Mr. President on Tuesday, he has given me assurance that steps are being deployed to ensure your safety. I urge you to be patient and resilient, we are aware of the very difficult conditions you find yourselves and we are in this together. We are not resting. We are doing whatever we can and, Insha Allah, we will achieve our aim.”

During his visit to Dikwa, Zulum went round to see the destructions by the insurgents at the palace of the Shehu of Dikwa, Nigerian Army’s 81 DIV TF BN NASC 9 Headquarters, 22 Armoured Brigade headquarters, UN Humanitarian Hub, primary healthcare centre and IDP camps. He consoled families affected by the attacks, and advised all residents to cooperate with the security operatives by reporting suspicious movements at all times.