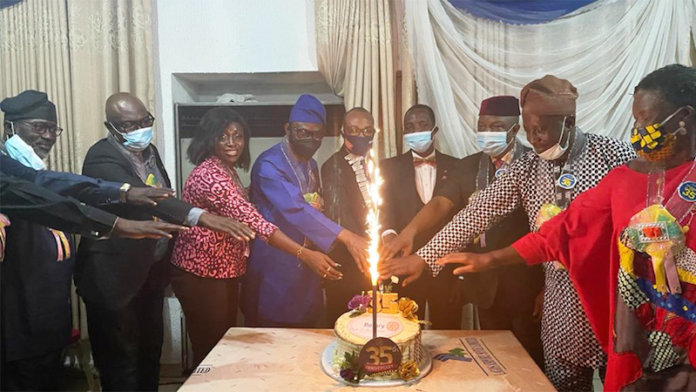 As Rotary International marks its 116 years this week, one of its affiliate clubs, Rotary Club of Akowonjo rolled out the drums on Monday to celebrate her 35 years in the service of humanity.

The well-attended celebration which held at the Lagos Airport Hotel, venue of the club’s weekly fellowship, saw many of the club’s past presidents being honoured and decorated for keeping the club’s flag flying for over three decades.

Speaking passionately at the event, a Charter member, Rotary Past Assistant Governor (Dr.) Olukayode Akinlade, went memory lane and espoused the various sacrifices members have made in ensuring that the club continued to remain relevant in the comity of Rotary clubs worldwide.

In his welcome speech, the visibly elated Club President, Rotarian Olamide Abegunde, congratulated all members of the club and appreciated them for their continued membership and support for the club and Rotary in spite of the Covid-19 Pandemic and economic downturn in the world.

According to him, Rotarians dedicate their howbeit scares resources for the good of others and this he said has been so for the past 116 years since the humanitarian organisation was founded by Rotarian Paul Harris in the United States of America.

The President, Rotarian Abegunde paid glowing tributes to the Charter President of Rotary Club of Akowonjo, Late Past District Governor, Rotarian Matins Itoitoi whose legacy he noted will continue to be lived as long as the club existed.