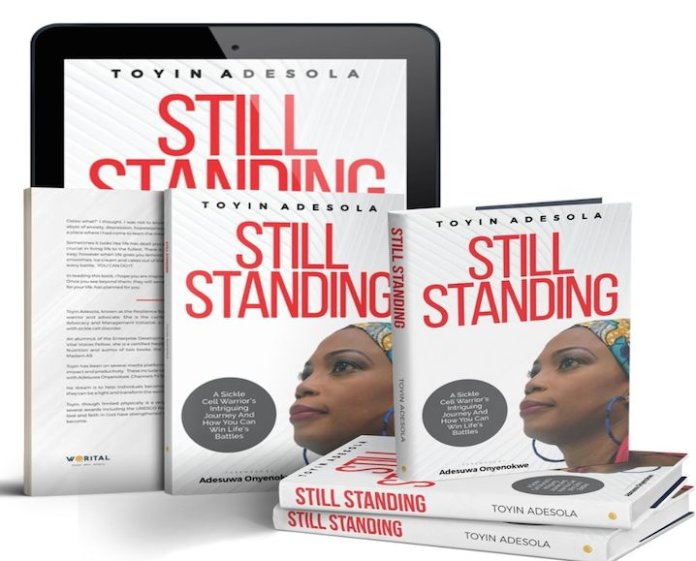 Let’s meet you?
My name is Toyin Adesola. I am the Executive Director of Sickle Cell Advocacy and Management Initiative. I’m also a resilient and social impact coach.

Tell us more about your NGO?
Sickle Cell Advocacy and Management Initiative is basically here to help people with sickle cell live a healthy, productive and resilient lifestyle so that they can be the best that they can be.
We are here to help them overcome their challenges, support them, provide support services like free clinics, which used to be monthly but the Covid did not allow it to be held monthly anymore because we have over 500 members and you can imagine the restrictions to 50 people, how many people will we accommodate.

So, we normally run a clinic providing free drugs, free consultation; sometimes even blood tests, malaria, etc. We also provide medical support like paying medical bills, that’s called ‘Wrescue’. We try to support people who are in need as much as we can considering the finances we have, we try to help them.

Then we place some people on health insurance (HMO), because we realised that it helps them with their bills, and their parents don’t have to worry about paying.
In fact, we had a lot of cases of those who are on it, so we try to raise funds again to put some more people on the HMO and then we also do awareness. When we do outreaches, we do free genotype, trying to get people to understand what sickle cell is about, stop the stigmatization and then educate them that it’s important to know their genotype and why it’s important to know their genotype.

How long has the NGO been in existence?
It is 12 years now. We officially inaugurated in 2008. Then by 2014 we really picked up. By then we had our own premises and everything, so we were able to really function as a structured entity.

What would you say has been the major challenge with people living with sickle cell in this part of the world?
I realise a lot of people don’t want to come out and talk on the issue. It’s like there’s silence among some certain people. I know there’s stigma but I remember there was Stigma against HIV in those days till people started coming out to talk about it more and more.

I think that is one major challenge; the ignorance, the silence, the lack of understanding among government, corporate organisations on the issues and challenges at hand.
For NGOs like us, we need funds to do an enormous amount of education that is required. Currently, we run free clinics, radio shows, and outreaches, but we need money for other mediums of education and awareness such as billboards, television, radio etc. which are quite expensive.

And it is only when corporate organisation and government actually takes it on as a campaign that it can really be effective, because you have to think of breaking it down into language and not just generalizing.

This is because we found out that when we are relating with these people some of them don’t really understand, so you have to speak their language. You know, get it to them, how do you break down technical details of sickle cell, the blood and everything in their own language.

So, those are the areas I think still need work, we need a lot of awareness still, and we need people to stop sweeping the issue under the carpet and talk about it more. Yes, we have some people but that’s mainly in Lagos and Abuja.

It was like a lot of people don’t know that this thing ever existed back then. The book wasn’t with a proper branding or marketing, however, it did make an impact as it were then.
Now, it has even been improved upon, rebranded, restructured, and now available for people to buy.

The whole idea is to raise funds. It is like a tool to get people to donate for the sickle cell course, and still hold something tangible after making their donations.
The book is inspiring. I mean, a lot of people who have met me after reading the book are people that I have never met in this world, and they gave good reviews of the book, and speak of how it inspired them.
In fact, there’s a part two, and it’s coming hopefully by the end of this year or first month of the year 2022.

There is a bill currently being deliberated about enforcing punishment on intending couples whose genotype are not compatible but still go ahead to get married, what’s your take?
I don’t think it is not realistic. Apart from the fact of it being legally wrong, all the top lawyers I know, those who are non sickle cell, including my friends who are SAN, said first of all its against human right to restrict somebody’s choice to who to marry.

Secondly, I look at it that it’s not possible. Looking at the how many millions of people you are trying to control and some of them not even understanding what genotype is, because of the communication and language barrier.

So what would you rather advise?
I would advise education. Education should be put out there as heavily as possible and people should be given access to healthcares. They should be educated on knowing their genotypes, especially understanding what it means.
No penalty whatsoever should be given to people on the basis of their marital choices. We are not God. Even God is merciful else a lot of the things we do ourselves; God would have taken a penalty against us.

Back to the book, how much impact do you see the book making?
I see it make more impacts than it previously did when I didn’t even do any form of advert or anything as that. The advert was organic generally, then I found myself on shows; Adesuwa shows, newspapers calling me here and there.
I hope it reaches a lot more people so they realize that yes you will go through some difficult situations in life, as God did not say we will never go through situations, or go through challenges, God just said if you walk through the storm, I will be with you.

I want people to realise that challenges will come but it is your ability to bounce back and make something of your life that is more important.
So this is a message of hope, a message of resilience and purpose and positivity to bring you back in the consciousness, especially with this Covid, that nothing is lost.
Yes, we are going through a lot but we will be able to bounce back once you have the right mindset and trust in God.

What inspired you to write a book?
The truth of the matter is, my great maternal grandmother of blessed memory inspired me. In reality, I was like what is my own with a book, what have I achieved. And like every young mind, I felt that I have not achieved anything.

But she was always telling me that she was waiting for my book, but I was always like this elderly woman, leave me alone. However it was not until she passed on that I realised that this woman never got to see the book that she so eagerly wanted.
So I decided I was going to write the book. In three month I wrote the book. Thankfully I keep a diary of my day to day experiences, so it aided me with the book.

What’s your message to living with sickle cell?
Don’t give up, life may seem bad, but there is still light at the end of the tunnel, have faith in God and surround yourself with people who would encourage you, not people who would put you down, or people with sympathy.

The worst thing you will need is sympathy because sympathy is all about pity, and it doesn’t help you mentally, and your mindset will now become who they say you are.
Surround yourself with people who would encourage you, if you don’t have it in your family, find it in a church group or mosque or even NGOs, as there are so many support NGO’s out there.