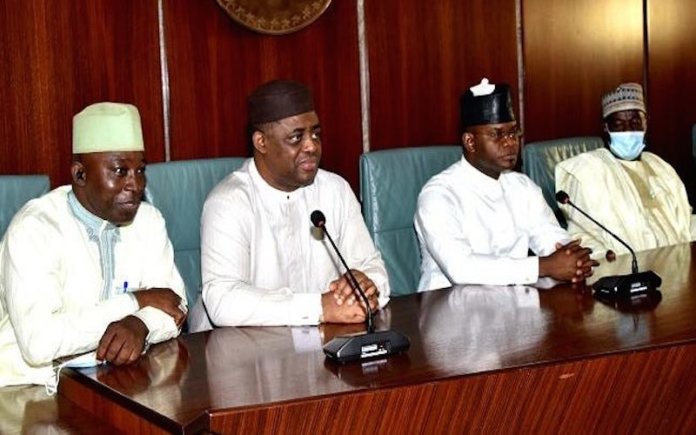 President Muhammadu Buhari is committed to the indivisibility of the Nigerian nation, Kogi State Governor, Mr. Yahaya Bello, has said.

Bello said yesterday in Abuja after a meeting with the president that Buhari told him that the unity of Nigeria remains non- negotiable.

He stated that Buhari also asked Nigerians to go about their lawful duties without fear of any harassment or intimidation from any quarters.
Bello told State House correspondents that Buhari spoke when his Chief of Staff, Prof Ibrahim Gambari, led him to brief the president on the suspension of the strike to block supply of foodstuffs and cattle to the South by the Amalgamated Union of Food and Cattle Dealers of Nigeria (AFUCDN).

On the outcome of the meeting, Bello who commended government’s efforts to resolve the crisis, said: “Mr. President expressed concern over the insecurity in the land. As the commander-in-chief, he has assured everyone of us based on his security meeting yesterday that Nigeria is going to be secured, safe and prosperous and I believe in him 100 per cent.

“He urged everyone of us to continue to go about our lawful businesses in the country, that Nigeria’s unity is not negotiable, that Nigeria must be united, peaceful and that Nigeria must be prosperous.”
On the demands of AFUCDN members, the governor said they were against extortion on the roads by law enforcement officers and touts.

“But thank God, Mr. President has given a directive that all law enforcement agencies should ensure that traders should not be extorted on the road again.

“So, they are asking that extortions be stopped and also that those who kill their members be brought to justice. I don’t think they’re asking for too much. So, if those demands are met, or at least, attempts have been made to meet those demands, and if they can graciously respect Mr. President, respect us and sympathise with Nigerians and call off their strike and begin the supply of food and other items to all parts of this country, I think it behoves on us to equally meet them midway so that there’ll be no such occurrence again, anyway.

“And remember that the crisis was snowballing into a major national catastrophe whereby some other parts of this country were gearing up for reprisal in this country and setting us up for crisis. Meanwhile, those who set up the crisis, that is what they want to achieve.

“We can’t afford to allow this country to snowball into civil war again, not this time around. We are so much interwoven that we are inseparable, again, by marriage, by business investments, by politics, and every other form of development.”

Asked if his intervention in the crisis is not to oil his 2023 presidential ambition, Bello said: “I am not running away from the fact that numerous teaming Nigerian youth, women, leaders and followers, various groups are calling me to contest for the presidential election in 2023. That is their right; it is within their purview to ask that I run as their representative in government today. They’re asking me to replicate the same in the national level, that is within their rights.

“But to say that when there is another call of an assignment from the commander-in-chief on me to ensure that a little problem that can be solved, should not be allowed to snowball into a larger crisis that would put this country on unknown collision course, I think I will never hesitate to take up that responsibility, and that I have done successfully to the glory of God and to the satisfaction of majority of Nigerians and Mr. President.”