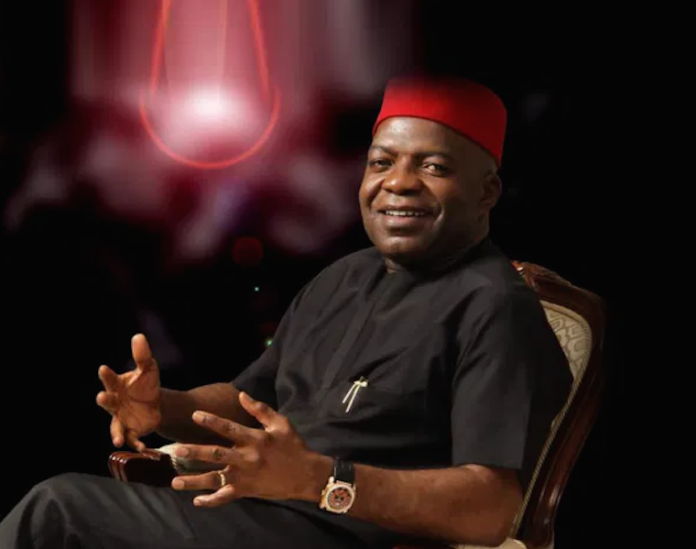 In a tribute to his friend Comrade Issa Aremu on his 60th birthday, Dr Alex Otti had narrated how in his early years as a bachelor a certain landlord had overturned a previous housing arrangement with his friend, Issa, with whom he was sharing an apartment and made him ‘Alex’ vacate his room without prior notice and he “The Son of man’ had no where to lay his head!”

My path with this “Son of man” crossed during the 2015 Abia gubernatorial election. We have an Abia state Diaspora group based in USA and Canada, which I happened to be the Secretary of the group. In the course of searching for a gubernatorial candidate that our group in Diaspora will support, we had to do a lot of background check. After much research and background enquiries our group settled for the then bank MD who was contesting the gubernatorial election in Abia state.

Our group, consisting of mainly well-informed politically conscious professionals in the United States and Canada, had worked independently and we unanimously agreed to support Dr Alex Otti as our preferred candidate.
For the most part, in this part of the world that we live in, people are respected when their stories portray a humble beginning that sprouts success through self-discipline, dedication, hard work and perseverance irrespective of the challenges their background had posed.

Dr Alex Otti’s background had been an excellent fit and made him an easy choice for us. In his case, this is a story of a young man whose parents had minimal income that could barely sustain their family daily living expenses not to talk of sending their children to the university. Young Alex would have to hawk on the street in the morning before going to school to help make ends meet. He ended up going to the University of Port Harcourt against all odds, graduating with a First Class in Economics and the best student overall with the highest GPA. He eventually rose to the peak of his career by attaining the height of a bank Managing Director in Nigeria. It was indeed a perfect choice and easy for us to support his candidacy.

Over the years, in the course of interacting with Dr Alex Otti, I found out that there is a lot of special attributes attached to this one man that have earned my admiration and great respect. My grand father used to say “Sabi book no be sabi sense” Not only has Dr Alex Otti proven to be an academic genius; he also has the native wisdom, which for the most part is very essential to be successful in life.

To me people don’t care much about you until you show how much you care about them. In 2018 kidnappers abducted my mother in my village. I had reached out to some of my contacts. Dr Alex Otti was far away in Germany but he followed up with me almost on a daily basis until my mother was released. He has always been there for me and my family both in good and bad times and so he is to many of his friends some of whom he has kept close relationships for as long as 40years and still counting. In him I find a man whose loyalty to true friendship is parallel to none.

Over these years I have tried to study Dr. Alex Otti through some of his actions, decisions, and stand on issues and found him to be a true leader in every definition of leadership and an administrator per excellence. He had exhibited boldness where a lot of leaders will shiver, he had stood by the truth where most men will bend in order to be politically correct and he has judged men not by what people say about them but based on the content of their character as they have proven to him. His ability to be calm and rationale in the midst of a storm is a rare gift and hardly will there be a problem with him not having a solution or an idea of solving the problems. His versatility in almost every sector of the economy be it banking, energy, telecom, Information Technology etc is outstanding.

In our home state of Abia, Dr Alex Otti has carved his name on stone and has made himself from obscurity to sublime. Hardly will you mention Alex Otti in any village in Abia state that both the old and young will not know him. This is not just because he had contested elections in the state, but because of his humanitarian deeds and developmental strides in various communities.

I travelled to Nigeria last December to bury our late father. After the burial I decided to pay a thank you visit to revered Royal Highness who had helped to facilitate the grading of the road leading to our family compound. I avoided the route I knew because of bad roads and had to stop at a villager to help me with directions leading to the Eze’s palace. Typical of a villager giving direction, he said to me “ just drive straight, you will get to Alex Otti road, and make a right turn” surprised to hear him refer the road as Alex Otti’s road, I asked him why is it called Alex Otti road?
In his response, in our native dialect “Bros are you a new comer? Alex Otti has attracted NDDC to work on our roads. When you get there you will see what I am telling you, the road is now ‘tear rubber’ “a parlance for brand-new. True to the description, I was pleasantly impressed on the quality of road construction I saw.

In addition to his contribution to road construction, The Alex Otti Foundation, which provides scholarships, aimed at empowering indigent academically bright young Abians whose families can not genuinely afford the cost of tertiary education have given opportunities to many students enrolled in government owned tertiary institutions, This same foundation has given loans to small business owners to help them grow their businesses and grants to indigent artisans in Abia state.

My late father, Sir A E Ibeneme, would say, “Don’t be impressed by money, followers, degrees and titles, rather be impressed by kindness, integrity, humility and generosity.” Dr Alex Otti’s kindness and generosity more than the success he has attained on earth will make way for his generation unborn.

I celebrate you. You have been a leader worthy of our followership. A fighter for the downtrodden and a social justice crusader. I salute your courage and doggedness. You are an exemplary family man and a role model to many of us.
I want to use this opportunity on your birthday to thank you for the privilege of our relationship, which I value tremendously. I want to let the world know that I appreciate you as a big brother, my leader and role model.

I am sure that posterity will pay you with a golden coin for all the sacrifices you have been making to uplift mankind and liberate people from the claws of oppression and injustice.
As we continue to celebrate your new age, I pray that God in his infinite mercy will fulfill your heart’s desires. May God continue to bless you with good health, wealth and with the wisdom of King Solomon.