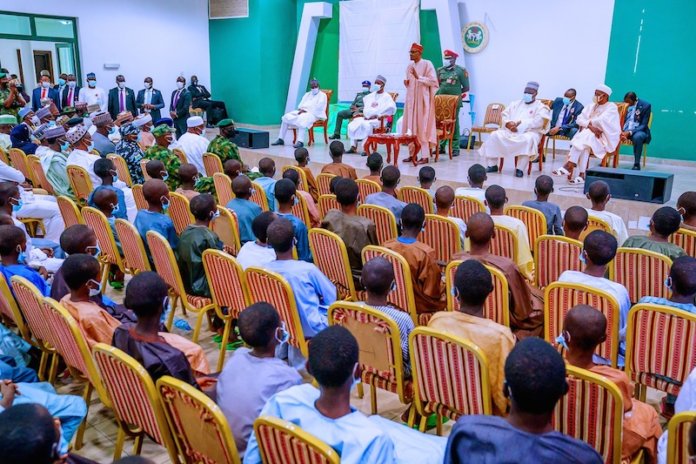 Emotions ran high as the recently-freed pupils of the Government Science College, Kagara in Niger State, abducted on February 17, reunited with their parents and guardians on Sunday night.

The 27 students and 15 staff members and their families were taken into hiding in the Allawa forests but the state government secured their release 11 days later.

It was an emotional atmosphere as the parents and guardians embraced their children and wards after they were released to them in Minna.

Prior to their release to their parents and guardians, the state government had carried out medical examination on them and profiled them.

Some of the parents and guardians shed tears of joy while the pupils laughed gleefully at the warm embrace.

The Commissioner for Education, Ms. Hannatu Salihu, supervised the handing over of the pupils to their parents and guardians.

Salihu assured the parents that the government has taken a decision to secure all schools in the state to forestall a reoccurrence of the incident.

“Niger State government will secure all its schools from criminal elements to allow students and pupils to pursue their education,” Salihu said
She urged the parents and guardians not to stop their children and wards from going to school because of the incident, adding that the state government has taken the precaution to make the schools safe.

The commissioner added that arrangements have commenced to allow the SS3 students who are in boarding schools, now closed by the government, to write their final examinations.
“We are in contact with the SS3 students and working out how best we can help them so that they will write their exams. I am sure at the end of the day, we will come out with something productive for them,” she stated.

She thanked the parents and guardians for their patience “during the trying period” and urged them to remain strong and always trust in God.

Most of the parents and guardians expressed their readiness to return their children and wards to the school when they are reopened.

The state government, as a precautionary measure, had announced the closure of all boarding schools in Rafi, Mariga Shiroro and Munya local government areas where banditry and kidnapping are rife.