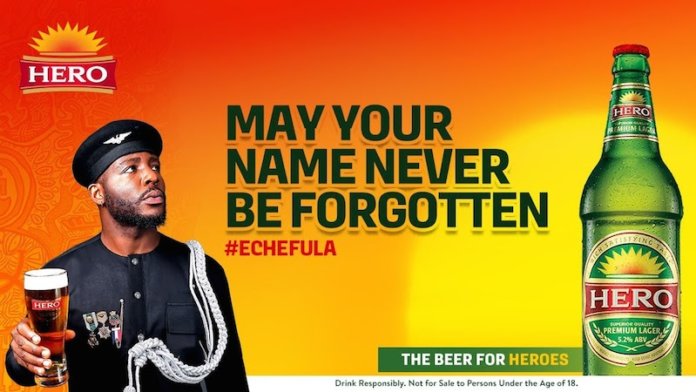 Hero, has launched a new campaign, tagged ‘Aha Gi Efula’. Aha Gi Efula which means ‘May your name never be forgotten’ speaks to the importance of one’s name, personal identity, and leaving a legacy.

The nationwide campaign seeks to inspire Hero’s teeming consumers to aspire to great heights—and in doing so—etch their names in the memory of humanity. It is premised on the belief that a name holds intrinsic value and embodies a person’s identity.

Hero is one of the leading products of International Breweries Plc, a proud part of Anheuser Bausch InBev (AB InBev), the world’s largest brewer with more than 400 beer brands.

According to Marketing Manager, Hero, Margaret Igabali, having established itself as a brand that is rooted in culture and tradition since its emergence on the Nigerian consumer market scene in 2012, Hero is going one step further to spur Nigerians to not just dream and envision a brighter future but to work assiduously towards it in the belief that their name will never be forgotten.

“Hero has always showcased the colourful cultures and traditions that define Nigerians as a people because we realise they are what makes us unique.

“In particular, the people of the south-east have embraced the brand, employing sobriquets such as ‘Pride of the East’ and ‘Ompa’ (which translates to “My father”) to describe their affinity towards the beer. And this time around, Hero is inspiring consumers to live up to their name and live a lasting legacy with the Aha Gi Efula campaign,” she noted.

Aha Gi Efula is a prayer and a declaration and tells the story of heroes gone past who succeeded despite the challenges they faced. It represents hope, inspiration, and an unwavering conviction that a person’s legacy will endure through the years and serve as a point of reference for others long after they are gone.

Hero is embarking on the journey to greatness with its consumers; it recognises the courage, ambition, resilience, and leadership qualities the average Nigerian possesses through cultural initiatives such as the Igbo Apprenticeship System and hopes to drive the awareness of these attributes through this one-of-a-kind campaign.

Expounding further on the launch, Marketing Director, International Breweries Plc, Tolulope Adedeji revealed that as a brand rooted in culture, Hero is set to positively inspire consumers to aspire for success and strive to leave lasting legacies. “Our core consumers embody the values of Hero which include bravery, persistence, hard work, and purpose, and the relevance of these qualities are what the Aha Gi Efula campaign underscores,” she said.