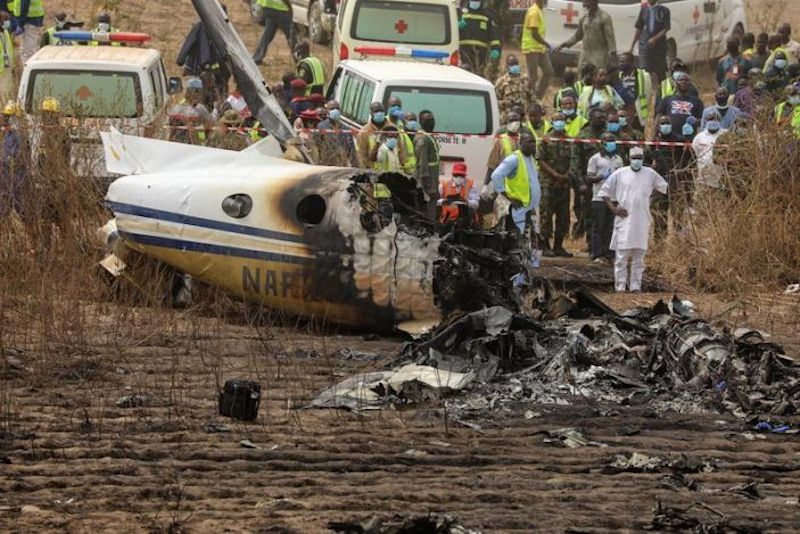 Rescuers and people gather near the debris of a Nigerian air force plane, which according to the aviation minister crashed while approaching the Abuja airport runway, in Abuja, Nigeria February 21, 2021. REUTERS/Afolabi Sotunde

NAF, in a statement, confirmed the death of the seven personnel, which occurred as the plane crashed while returning to Abuja after reporting engine failure.
The plane, according to the air force was on a rescue mission.
This is coming as the Nigerian Civil Aviation Authority (NCAA) has announced the lifting of the ban on Boeing 737 MAX aircraft.

A statement by the NAF spokesman, Air Vice Marshal Ibikunle Daramola, said the aircraft was returning from Minna, Niger State capital when the incident occurred.
Following the development, the Chief of Air Staff, Air Vice Marshal Oladayo Amao, yesterday ordered an investigation into the crash.

The Air Force said: “This is to confirm that a Nigerian Air Force (NAF) Beechcraft King Air B350i aircraft crashed while returning to the Abuja Airport after reporting engine failure en route Minna.

“First responders are at the scene. Sadly, all seven personnel on board died in the crash.
“The Chief of the Air Staff (CAS), Air Vice Marshal Oladayo Amao, has ordered an immediate investigation into the incident.
“While urging the general public to remain calm and await the outcome of the investigation, the CAS, on behalf of all NAF personnel commiserates with the families of the deceased.”

Last night, the NAF released the names of the seven personnel, who died in the air crash.
It said in another statement that the aircraft was scheduled to conduct surveillance missions over Niger State and its environs in connection with the concerted efforts to secure the release of the students/staff abducted from the Government Science College Kagara, Niger State.

The names of the fallen officers include Flight Lieutenant Haruna Gadzama (Captain), Flight Lieutenant Henry Piyo (Co-Pilot) and Flying Officer Micheal Okpara (Airborne Tactical Observation System (ATOS) Specialist).
Others are Warrant Officer Bassey Etim (ATOS Specialist), Flight Sergeant Olasunkanmi Olawunmi (ATOS Specialist), Sergeant Ugochukwu Oluka (ATOS Specialist) and Aircraftman Adewale Johnson (Onboard Technician).
The statement said the Chief of the Air Staff (CAS), Air Vice Marshal Oladayo Amao, has instituted an investigative panel to determine the remote and immediate causes of the accident.
It said while the panel has commenced its work, the NAF, has officially notified the next of kins/family members of the deceased.

Earlier, the CAS visited the scene of the accident, in company with the Minister of Defence, Maj. Gen. Bashir Magashi (rtd); Minister of Aviation, Senator Hadi Sirika; Chief of Defence Staff, Maj. Gen. Lucky Irabor, and other service chiefs.
In a condolence message, Buhari, in a statement by his Special Adviser on Media and Publicity, Mr. Femi Adesina, condoled with the bereaved families, friends, and colleagues.

He said while investigations into the cause of the crash were ongoing, the safety of the Nigerian airspace remained a key priority of the government.
The Niger State governor described as unfortunate the crash of the NAF plane.
“It is a setback to the military now that the security forces are being overstretched due to security challenges confronting Niger State at the moment and the country at large,” Bello said in a statement by his spokesperson, Ms. Mary Berje.
The APC also expressed sadness over the fatal crash of the military aircraft.

The National Secretary of the Caretaker/Extraordinary Convention Planning Committee, Senator John Akpanudoedehe, said the incident had brought to fore the tireless work, sacrifices, and hazards faced by the country’s armed forces and other security services in their daily efforts to keep the country safe.

He said: “We extend our condolences to the Nigerian Air Force, particularly the families, loved ones, and colleagues of the seven air force personnel that lost their lives in Sunday’s plane crash following a reported engine failure.”
The Minister of Humanitarian Affairs, Disaster Management and Social Development, in her condolences, sympathised with the air force and the bereaved families.

“The Nigerian Air Force has been of immense help to our humanitarian activities since the creation of the ministry. They have helped to airlift humanitarian relief for Persons of Concern (POCs), especially during the lockdown period to curtail the spread of COVID-19 in 2020 and to victims of flood, banditry, communal clashes, and other disasters.
“We appreciate the services of the aircrew especially the pilots who have put in hundreds of hours of flying us to and from areas affected by disasters and other humanitarian issues,” Farouq said.

Meanwhile, NCAA has lifted the ban on Boeing 737 MAX aircraft.
With this announcement, the aircraft can now operate in Nigeria’s airspace as the regulatory authority said the approval was given since February 12.

NCAA had banned Boeing 737 MAX in March 2019 following two fatal accidents involving the aircraft in Indonesia and Ethiopia in 2018 and 2019, respectively.
But the Director-General of NCAA, Captain Musa Nuhu, said on November 18, 2020, the agency received a “Continued Airworthiness Notification to the International Community (CANIC), CAN-2020-24, advising it of the United States Federal Aviation Administration’s (FAA) ongoing continued operational safety activities related to returning Boeing Model 737-8 and 737-9 (737 MAX) aircraft service.”

He also said that NCAA recognised that a Joint Authority Technical Review (JATR) that comprised of International Aviation Authorities such as the European Aviation Safety Agency (EASA), Transport Canada (TC), and Singapore Civil Aviation Authority, amongst others, carried out a joint review of the Boeing 737 MAX safety system alongside FAA and NASA.

Nuhu added that all foreign air operators intending to operate the Boeing 737 MAX aircraft into Nigeria must submit evidence of compliance with the FAA AD February 24, 2020.
Nuhu also stated that the Nigerian Civil Aviation Authority would continue to ensure strict compliance to safety regulations as a violation would be viewed seriously.