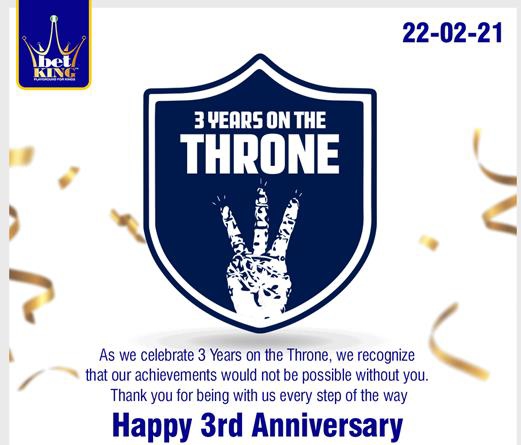 BetKing, one of Nigeria’s foremost digital entertainment and sports technology businesses, on February 22, 2021, celebrated its third-year anniversary with Jay-Jay Okocha, and DJ Cuppy among a list of well-wishers who felicitated with the company.

The Group entered the African market in 2018 and has grown to be a significant player in the region. As part of the celebrations, the group also ran a series of exciting interactive activities and hosted the Royal Phoenix Virtual Hangout for its customers, partners, and staff.

In a statement on Thursday, by the company, “Betking has built a culture of excellence over the last three years and is focused on delivering a customer-centric approach across its retail and online channels.

“Over the last three years, it works to identify and create products that provide customers with great sports entertainment experiences, thereby successfully building a brand portfolio that customers recognize and trust.

“The company currently employs more than 100 employees coming from diverse backgrounds that are passionate, resilient, and committed to making BetKing, Africa’s most valued company. It has also created over 50,000 jobs through its agent network.”

The statement likewise revealed that the Royal Phoenix Virtual Hangout was attended by the BetKing ambassador, JJ. Okocha, who expressed delight in “being part of a company that is so resilient and one which is here to stay”.

DJ Cuppy, who also attended the virtual party, congratulated BetKing and wished the company “300 more years on the throne, as three years of existence is no small feat”. The virtual hangout included trivia games, followed by Jay-Jay and Cuppy on the hot seat.

Looking ahead, BetKing Nigeria Managing Director, Gossy Ukanwoke, stated that the company was “going into a new phase of its existence by leading with innovation, a focus on customers and making a further impact on society. This new phase will usher in more offerings, games, rewards, and excitement for customers in Nigeria and the society at large.”

He ended by thanking BetKing customers, partners, and employees, adding that, “we would not exist without them.”