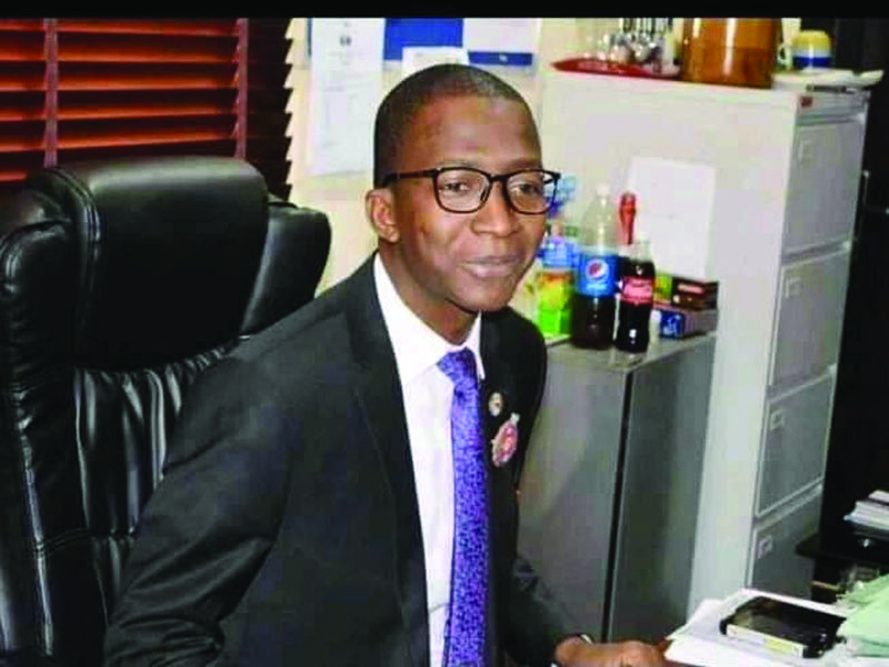 The recent nomination of Mr. Abdulrasheed Bawa as the Chairman-designate of the Economic and Financial Crimes Commission has elicited a mixed debate between merit and the law. Kingsley Nwezeh writes

BRIEFING NOTES
One of the most dominant topics in the country today is the issue of adherence to the rule of law or lack of it in appointments into federal positions.
Thus, the nomination of Mr. Abdulrasheed Bawa as the Chairman-designate of the Economic and Financial Crimes Commision (EFCC) is already generating controversy over whether or not it met the conditions stipulated in the EFCC Act 2004 with regards to the leadership of the commission.

While the nominee is eminently qualified to occupy the position by virtue of his rich resume, his nomination by President Muhammadu Buhari, however, falls short of the expectations of the law.
Quite notably, the nomination of Bawa, a certified Anti-Money Laundering Specialist (CAMS) brought to an end, the era of the headship of the commission by police officers.

Bawa, a product of the EFCC Academy has worked in the agency since his graduation from the academy in 2005.
In addition, Bawa was also trained by the United States Federal Bureau of Investigation (FBI), United States Financial Crime Enforcement Network (FINCEN), The World Bank, The United Nations Office of Drug and Crimes (UNDOC), the Nigeria Police, the Department of State Security (DSS), the EFCC Academy and United Kingdom’s Global Training Consulting.
With such an enviable background and the likely synergy with western countries, it could be said that there is a bright future with regards to the anti-graft war in Nigeria.

It is also expected that the 40-year-old nominee would bring his youthful energy to bear on the leadership of the commission.
What’s more, Bawa’s academic qualifications include Bachelor of Laws (LLB), University of London-in view, Masters in International Affairs and Diplomacy Usmanu Danfodio University Sokoto in 2012 and Bachelor of Science Degree in Economics (Second Class Honours, Usmanu Danfodio University Sokoto in 2000

In his curriculum vitae, Bawa stated that he “supervised the biggest operations zonal office of the EFCC in Lagos, having 604 officers and men and securing 227 convictions despite the Covid-19 pandemic.
“He also supervised the investigation of all cases in Port Harcourt Zonal office in which an unprecedented 215 convictions were secured in eleven months and securing final forfeiture of hundreds of properties to the federal government”.

Yet, the Legal Snag
His qualifications, training and evident capacity notwithstanding, the nomination appears not to have met the basic requirements of the law.
Section 2(1) of the EFCC (Establishment) Act, 2004, provides for a “Chairman, who shall be “(i) the Chief Executive and Accounting Officer of the Commission; (ii) be a serving or retired member of any government security or law enforcement agency not below the rank of Assistant Commissioner of Police or its equivalent ”.

Unfortunately, Bawa’s present rank is below the ACP equivalent rank in spite of the fact that there are many senior directors in the commission, even though he was reported to have just been elevated ahead of his screening.
The matter is already a subject of litigation. A Federal High Court sitting in Abuja Friday gave the Senate and the EFCC Chairman-designate 30 days to show cause why the nomination should be sustained.

This followed a suit number ABJ/CS/196/2021, filed by an Abuja-based legal practitioner, Osuagwu Ugochukwu.
The reliefs sought by the legal practitioner include a true interpretation and construction of Section 2(1)(a)(ii) of the Economic and Financial Crimes Commission (Establishment) Act 2004, whether Bawa is qualified to be appointed chairman of the anti-graft agency and whether the Senate is competent in law to confirm the appointment of Bawa, who is deemed to fall short of the requirement of Section 2)(1)(a)(ii) of the EFCC Establishment Act 2004.

Osuagwu is also seeking three declarations to determine the fate of the suit.
The declarations include that Bawa is a Grade Level 13 public officer and not an Assistant Commissioner of Police (ACP) or its equivalent as stipulated in the EFCC Act and therefore not qualified to be chairman of the commission; an order of perpetual injunction restraining the Senate from confirming Bawa’s appointment as chairman of the EFCC and any other order(s) the court may deem fit in the circumstance.

Coming through originating summons, the suit has since been served on the office of the Senate President and the proof of service acknowledged on Thursday, February 18. But the nominee was due for confirmation last Thursday.
No doubt, the Bawa dilemma might turn out a good test of the strength of the laws of the land and the Act setting up the EFCC. Even more concerning is how a legal provision could rob the nation of an otherwise good hand in a crucial institution and at a critical time in nation’s history.