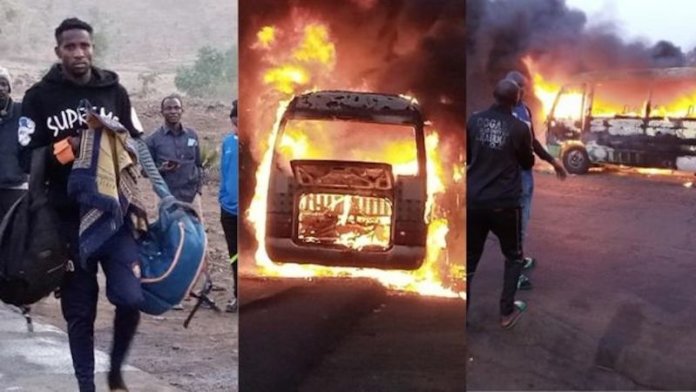 Players and officials of Wikki Tourists Football Club of Bauchi State escaped death by the whiskers yesterday morning as the bus conveying them to Uyo, the capital of Akwa Ibom State, for this weekend’s NPFL Match-day 11 fixture with Dakkada FC was involved in an accident.

Secretary of the club, Mallam Abdullahi Ibrahim who confirmed the incident to newsmen in a telephone interview disclosed that the accident occurred at Hawan Kibo in Plateau State.

He explained further that the bus left Bauchi at about 4: 00 am on Thursday and was moving smoothly before the accident.

Malay Ibrahim further revealed that the kits and other belongings of all the players and officials in the bus were completely burnt as they could not retrieve anything from the burning bus.

“Thank God no one is hurt but the players are in the deep shock. Most of them escaped the burning bus through the windows.

“We have spoken with Plateau United FC officials to assist us with a bus to convey the players and officials back to Bauchi,” the club secretary who is the Marafan Ciroman Bauchi revealed.

He was however not sure if the scheduled match with Dakkada will be postponed by the LMC to enable the players recover from the shock of the accident.

“The match was to be played this Saturday and was supposed to be a live game but now with this accident we don’t know what action the LMC will take on the matter,” he said.

“We don’t know for now because even if they are to play the match, will they play barefooted?

“There was nothing that was removed from the bus. All the players’ bags, kits , jerseys etc were all burnt.

“The items are usually gathered in one corner of the bus whenever they are travelling,” he concluded.