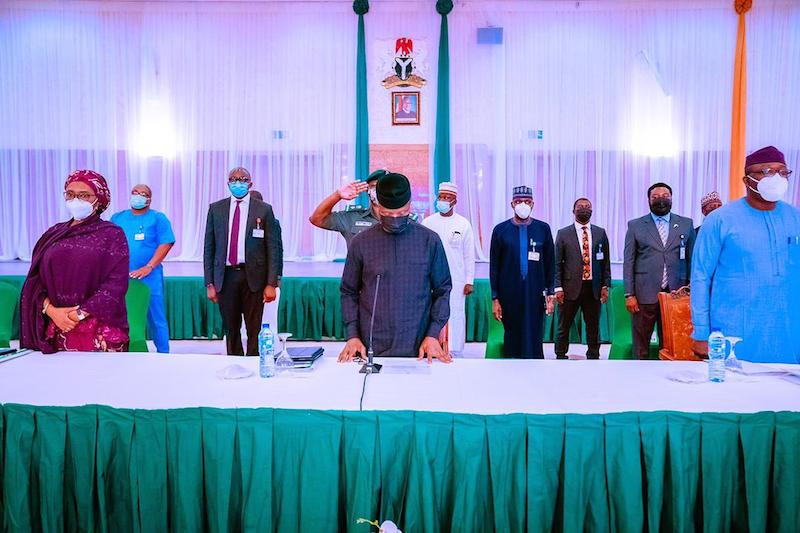 The National Economic Council (NEC) yesterday rose from a meeting in Abuja, with a resolution by both the federal and the 36 state governments to arrest and immediately prosecute those fomenting or promoting trouble.

The council, consisting of all the 36 state governors with Vice President Yemi Osinbajo presiding stated that it took that the decision to arrest the rising insecurity in the country.

The NEC in its resolution read to newsmen by Ogun State Governor, Prince Dapo Abiodun, and his Kebbi State counterpart, Senator Atiku Bagudu, also resolved to protect Nigerians wherever they reside notwithstanding their ethnic background.

States are also to henceforth pay compensation for damages and reconstruct destroyed homes during targeted attacks.

The NEC said concerted efforts would be made henceforth towards the immediate investigation, arrest and prosecution of all perpetrators of crime while both the federal and state governments should ensure the safety of all Nigerians, wherever they reside, irrespective of ethnic, religious or regional status.

It urged both the federal and state governments to recommit to “the protection of all residents of all states, including non-indigenous communities and religious and ethnic minorities within state jurisdictions.”
It resolved that in collaboration with federal authorities, there should be the commencement of “the reconstruction of destroyed homes and payment of compensation where appropriate by state authorities for damage to property and livelihoods sustained during targeted attacks on communities within their jurisdictions.”

On the security situation in the country, NEC canvassed the establishment of a mutual framework for addressing the protection of vulnerable communities, especially ethnic and religious minorities.

The governors reaffirmed their commitment to national unity and pledged among other things, to ensure the arrest and prosecution of the perpetrators of crime, to collaborate with federal authorities to reconstruct destroyed homes and pay compensation where appropriate for damage to property and livelihoods during targeted attacks on communities, as well as the unequivocal condemnation of manifestations of hatred, hate crimes and related violence against communities.

Other resolutions of NEC include: ensuring that deceased victims of violence are accorded dignified burial rites; the immediate public and unequivocal condemnation of all manifestations of hatred, targeted violence and other hate crimes against ethnic, religious and minority groups; ensuring that local security initiatives – whether they are state government law enforcement agencies or local vigilante groups or the community policing programme of the Nigeria Police Force – are inclusive and are composed with due consideration given to adequate representation of non-indigenous/minority resident communities; ensuring that all state, local and communal security initiatives operate according to guidelines consistent with state legislation and the constitution; and that state governments have statutory jurisdiction over forest reserves and will seek federal support for efforts to eradicate forest-based crime.

The NEC meeting also included a presentation of the strategy for the realisation of President Muhammadu Buhari’s vision to bring 100 million Nigerians out of poverty by the Presidential Economic Advisory Council (PEAC).
The meeting is to set up a technical committee of NEC, comprising three governors and representatives of the federal government to look at details of states’ involvement and how their concerns could be addressed in the presentation and the implementation of the strategy.

Also at the meeting, Chairman of the Independent National Electoral Commission (INEC), Prof. Mahmood Yakubu, made a presentation on the need to expand voter access to polling units across the country.
The NEC, thereafter, resolved to support the commission’s bid to convert polling booths to full-fledged polling units and work out the details of doing so at the state level.