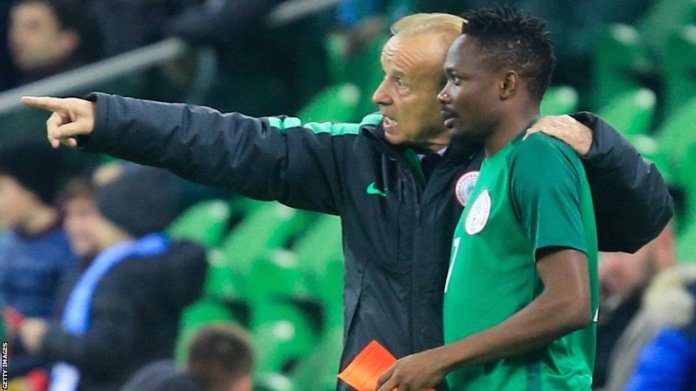 Super Eagles’ Head Coach, Gernot Rohr, believes his captain Ahmed Musa will find a new club but remains tight-lipped over calling him up for the upcoming Africa Cup of Nations squad.

The 28-year-old has been a free agent since leaving Saudi Arabian side Al Nassr in October and has been linked to several clubs in England.

He completed a successful medical at English Premier League side West Bromwich Albion but the club pulled out of a planned short-term deal because of a lack of finance.

“It’s unfortunate it didn’t work out at West Brom but I believe Musa will find another club soon,” Rohr told BBC Sport Africa.

“He has the ambition to get back as quickly as he can to play football again at club level.

“Musa made a great impact for us in big matches like against Iceland in Russia, that is a reminder of the ability he has.

“I have no doubt he can discover his best form, the happiness and joy to play again. This will be good for us because we can get to see that impact in our squad.”

The coach has refused to confirm if the player will be named in the country’s squad for next month’s qualifiers against Benin and Lesotho.

Even without a club Musa was included in the Super Eagles squad for November’s back-to-back qualifiers against Sierra Leone, a decision that was criticised by a section of the local media.

Al-Nassr paid a record fee of around $19 million (€16.5m) to Leicester City for Musa in the summer of 2018, making him the most expensive player in Saudi Pro League history.

He scored 11 goals and provided 14 assists in 57 matches, helping the Riyadh-based outfit to League and Super Cup titles.

Before his stint at Leicester Musa had achieved success in Russia with CSKA Moscow where he won three league titles and added three domestic cup titles, before switching to the English club for a club-record fee in July 2016.

The pacey forward failed to establish himself with the Foxes scoring five goals in 33 matches.

Indeed his best period while on the books at Leicester actually came while on loan back at CSKA where he scored six times in 10 appearances at the Russian club – three times more than he managed in his 21 Premier League appearances.

Musa’s availability has also attracted interest from CSKA Moscow for a third spell.

He is highly revered for scoring 61 times and creating 33 assists in 184 games across two spells at the Russian capital.

After Vincent Enyeama (101) and Joseph Yobo (100), Musa is Nigeria’s third most capped player in history, having played 95 matches since his debut aged just 17 in 2010.