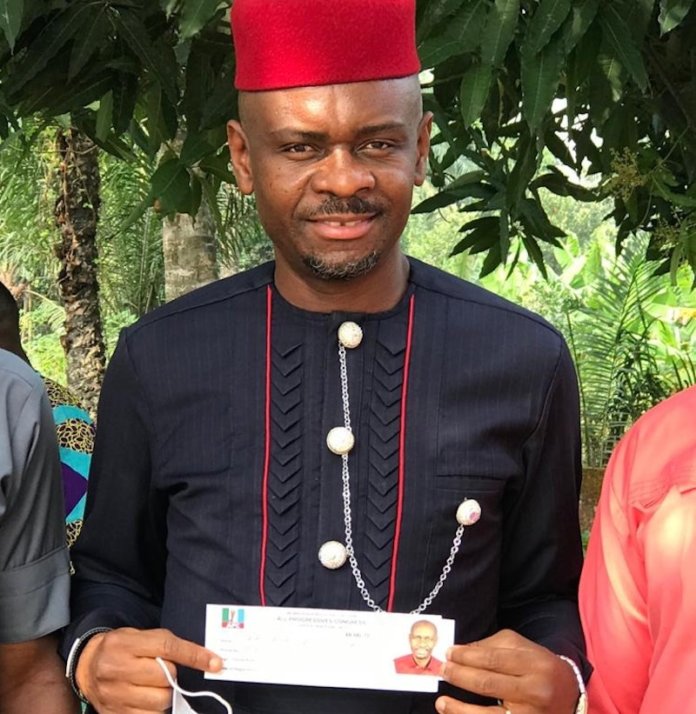 Leading contender for the governorship election in Anambra State, Paul Orajiaka, has said that the ongoing All Progressives Congress, APC, membership registration and revalidation exercise across the country will help the party consolidate on it’s vision of delivering the gains of democracy to the people.

Speaking after validating his membership of APC at his ward, Azia, Orajiaka expressed satisfaction with the progress of the exercise in the state and urged members to remain united to clinch the November Anambra governorship election.

He restated that the registration and revalidation exercise of the party would boost party membership and place it on the path of victory both at the state and federal level.

According to Orajiaka, APC’s ongoing registration and revalidation exercise is the best thing that has happened to the party in recent time, adding that with new members coming into its fold, the party will further consolidate its vision for the country.

He said: “From reports across the country, our party membership registration and revalidation is going on very well with a record number of new members joining the party. Contrary to the notion in some quarters, this exercise is the right thing for the party presently as it will rejuvenate the party and make us more focused on our vision to deliver the gains of democracy to the people.

” I am particularly excited that new members are joining us across the country. That is clearly a sign that people are having more confidence in the vision of our party to take the country to the next level of development.

While expressing satisfaction with the exercise in Anambra State, Orajiaka said: “The participation in my ward and other parts of Anambra is really amazing. In my ward alone, we have recorded a large number of turnout with new members joining the party.”

“With what is happening in the party so far, we are clearly on the part of victory. But we need to remain together to make sure that we channel our efforts to win the governorship election this November.

” Here in Anambra State, APC is a force to reckon with. I can tell you authoritatively that APC remains united in the state and there is no rancour among us. We have had several stakeholders meetings and we are more than ever united to reclaim our mandate and give our people purposeful leadership.”