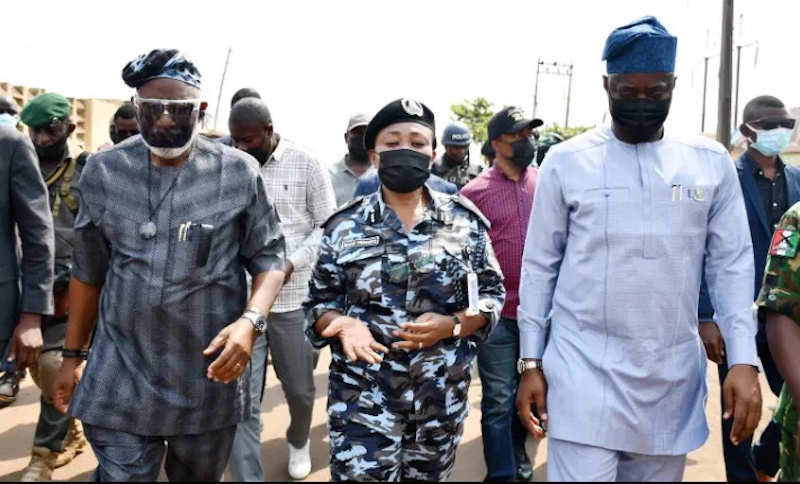 Their counterparts in Oyo and Ondo States, Seyi Makinde and Mr. Oluwarotimi Akeredolu respectively, also appealed for calm and peaceful coexistence between the Hausa community and their Yoruba hosts.

Vice President Yemi Osinbajo has also condemned the violence that led to the loss of lives at the Shasha Market and called for peace between the warring traders.

Tambuwal, who is Chairman of the Peoples Democratic Party (PDP) Governors’ Forum, stressed the need for all leaders to come together and work hard to save the situation.

“So, my charge is that all of us as leaders must come together irrespective of whatever views we may have in terms of approach to how the insecurity should be resolved.

“We should all be seen to be working together in coming up with a synergy and a template for resolving all of these conflicts.”

Speaking on the new service chiefs, Tambuwal said they should be given a chance to show their capacity to resolve the lingering insecurity in the country.

According to him, they have just resumed and should be given a chance to work.

“They know the issues and they know why all of us and many Nigerians came out to say that the other service chiefs should give way for new hands to come in and they should listen to the people and do what is required of them by securing Nigerians,” Tambuwal added.

He commiserated with Okowa on the death of his father, saying the late Sir Arthur lived an impactful life and would be long remembered for raising children that made great impacts in the society.

He said the deceased was an inspiration to his family members and a great patriarch and torchbearer.

On his part, Matawalle said his state had been the epicentre of banditry in Northern Nigeria.

He said his administration had recorded many successes using the kinetic and non-kinetic approach.

“As a person, I couldn’t just fold my hands and watch my people being killed. We have been fighting that battle using two approaches, the kinetic and non-kinetic and we have recorded some successes.

“We are all together, we are the same as one and we have been preaching peace because we want Nigeria to remain one.

“The security of the nation is not just for us as government but for all of us and we have lots of roles we can play as individuals so that we can be at peace as a nation,” Matawalle said.

Responding, Okowa thanked his Sokoto State and Zamfara counterparts for their visit.

He said his late father inspired him a lot in his political career.

“My dear brothers, I must truly thank both of you for coming because I know how far Sokoto and Zamfara is to Delta.

“I also know that you have security issues in both states but despite that you still found time to come and condole with me on the death of my father.

“Despite the age he passed on, it is still a lot of pain to us.

“In the last two weeks, we have received a lot of condolence messages and visits and my siblings and I are truly grateful.

“We missed him a lot but we are further consoled by the love from Nigerians.

“I know what insecurity is to any governor and I pray that God will enable us to handle the various challenges we have in our various states,” Okowa stated.

On his part, Osinbajo has condemned the violence that led to the loss of lives at the Shasha Market and called for peace between the warring traders.

Osinbajo, while addressing journalists after he paid a condolence visit to the family of the late former Governor of Lagos State, Alhaji Lateef Jakande, described the incident as unfortunate and tragic.

He said the market had been a melting pot for traders bringing foodstuff from the North to the South-west for decades and they had lived in peace and even inter-married.

According to him, when a disagreement arises between individuals or a criminal act is committed by one against the other, Nigerians must ensure that they see it for what it is, (a criminal act) which must be punished according to law and not as an ethnic conflict.

He stated that every Nigerian has a constitutional right to live, work and enjoy their lives in safety, peace under the law.

He, therefore, called on the police and other law enforcement agencies to arrest and prosecute any person who commits a crime against a citizen.

Meanwhile, Oyo State Governor, Seyi Makinde and his Ondo State counterpart, Rotimi Akeredolu, yesterday visited the troubled Shasa community in Ibadan, Oyo State, where traders clashed at the weekend, prompting the imposition of a curfew on the area.

They appealed for calm and peaceful coexistence between the Hausa community and their Yoruba hosts.

In a statement yesterday by the Chief Press Secretary to Oyo State governor, Mr. Taiwo Adisa, the two governors who spoke at the Shasa market and the palace of the Baale Shasa, urged the residents of the community and Oyo State, particularly the Yoruba and Hausa, to stop taking the law into their hands.

Makinde promised to give palliatives to those whose wares were affected during the crisis, adding that the two factions have to eschew violence and allow peace to reign.

He said: “Please, I want you to listen to me clearly. You cannot resort to self-help to solve the issue on ground. All of you who are here are doing business with one another in one way or the other.

“The last time I came here, about six weeks ago, some shops belonging to Hausa and Yoruba people got burnt.

On his part, Akeredolu said he was in Oyo State on behalf of the South-west governors.

He said every aggrieved party must stop fighting and allow peace to reign.

“Concerning the issue on ground, we have come to beg you. We have been living together for a very long time and this is not the time to start fighting ourselves. So, let us consider that. There are some things that could be making us angry but don’t let us look at that because things cannot be like this forever. I have come here on behalf of my colleagues in Ekiti, Lagos, Osun and Ogun.

“All of them have sent messages. Ogun has its own crisis it is battling with, so does Lagos. But as the chairman, I decided to come around to appeal to us,” he stated.

Akeredolu told the people them that as they were in their fatherland, their own sons and daughters were in another person’s fatherland.

“So, let us think about this and continue to live in peace with one another. We don’t need to fight ourselves,” he added.

He urged them to call the attention of security agencies to any issue that could cause crisis and warned that they must not take the law into their hands.

“I have a brother in Abuja and others living in Hausaland,” he added.