News in Photographs: Buhari Presides over FEC Meeting 4 hours ago

Aisha Buhari: My Husband Suffered from PTSD for Many Years 12 hours ago 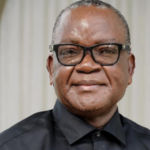 Becomes First Indigenous Company to Get LNG Licence
These are the best of times for the UTM Group boss, Julius Rone. The renowned businessman and his team’s efforts are finally yielding sky-reaching fruits as the company cleaves the title of being the first indigenous company to get Licence to Establish (LTE), the first floating LNG production plant in Nigeria.

Likely, Julius Rone and his family and the many team members are not the only ones excited about the news. To be the first indigenous oil and gas company licensed by the Department of Petroleum Resources (DPR) to establish a Liquefied Natural Gas (LNG) production plant in Nigeria is no joke. Considering the popularity of the oil and gas sector, as well as the goldmine of opportunities this licence is bound to unearth, the fact that Rone came out on top speaks to his genius and foresight, and the progressive team of UTM Offshore Ltd that never hesitate to reach up and pluck stars from the sky.

DPR presented the License to Rone’s company in Abuja on Monday, February 8, 2021. According to the DPR Director/CEO, Mr. Sarki Auwalu, the licence follows the government’s insistence on having Nigerian companies run the Nigerian oil and gas sector: owning the production plants, and at liberty to decide the direction of the sector. But the licence represents more than just the first true involvement of indigenous oil and gas companies in the establishment of LNG production plants: it is also a big win for oil-producing regions of Nigeria, especially Julius Rone’s Delta State.

Thus, Rone isn’t just the ‘Jewel of the Niger Delta’ in name only; the man is bearing the torch of progress and sustainable development.
What else is there to say? This is a time of celebration for every indigenous oil and gas company: if Julius Rone and his UTM can do it, so can others. And then in a matter of years, they will all be jewels of the regions and states—as Rone is.