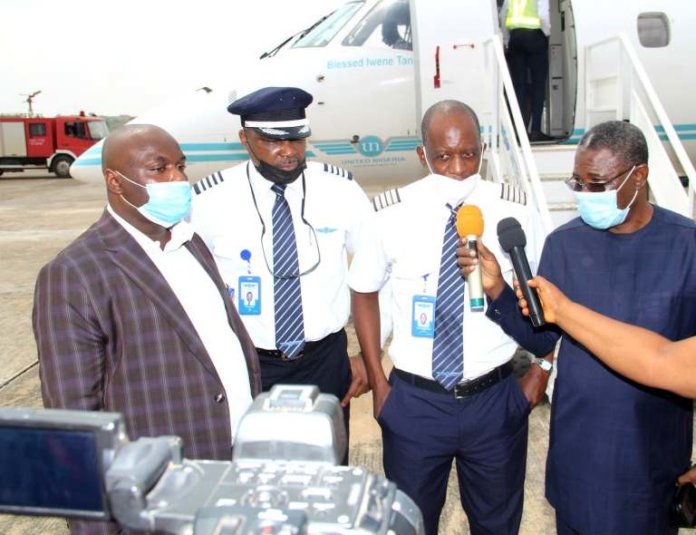 The Delta State Government has revealed plans to upgrade the Asaba International Airport to a ‘Category 9’ airport to enable the facility to receive bigger planes.
Special Projects Director of the airport, Mr Austin Ayemidejor, stated this shortly after the arrival of United Nigeria Airline’s maiden flight to Asaba.

The United Nigeria aircraft, marked 5N-BWZ, which was fully booked with passengers, touched down at exactly 11.40 am on Friday.

Ayemidejor said with activities at the airport steadily peaking, the Asaba Airport upgrade had become imperative in order to welcome bigger planes.
The state government had also written to the Nigeria Airspace Management Authority (NAMA) to increase the operational hours to 11:00 pm.

Ayemidejor said: “We intend to upgrade the airport to category nine, which will make it have the capacity to receive Boeing 737 and Boeing 777 but we have recently applied to the Nigerian Civil Aviation Authority (NCAA) for approval, to enable us operate beyond sunrise to sunset by extending operational hours to 11pm.

“The sixth airline, ValueJet is likely to come in a couple of weeks, and we have assurances from the Managing Director of Ibom Air that very shortly they too will start operations (into Asaba) perhaps by the second week of March.
“The level of activities here is very encouraging because the market is large, it’s very huge; and, so we need more airlines to operate here. We have lots of patronage from the eastern parts of the country, particularly the Onitsha area, and the other cities around Delta in terms of patronage.”

On the non-operationalisation of the Instrument Landing System (ILS), Ayemidejor said that the full components of the lights, ‘the localisers’, were all fully installed but were yet to be calibrated.

He said that the calibration was interrupted following the outbreak of COVID-19 pandemic, assuring that NAMA would come back soon to complete the calibration.

“Once the ILS and the localisers are fully calibrated then it will become functional for the airlines to use them”, he said.

Earlier, Captain of the airline, Lawani Abubakar expressed delight at the company’s foray into Asaba, saying that the airline would increase its operational frequency into the airport with time.

He said the airport “is looking very, very promising because Asaba is a very good place to fly into; and, we have good passenger figures and then we intend to increase the frequency with time.

“The runway is fine but the ILS is not serviceable at the moment. However, with full visibility the approach system they have now is good. The Asaba Airport is safe and we have very good services for our customers.”