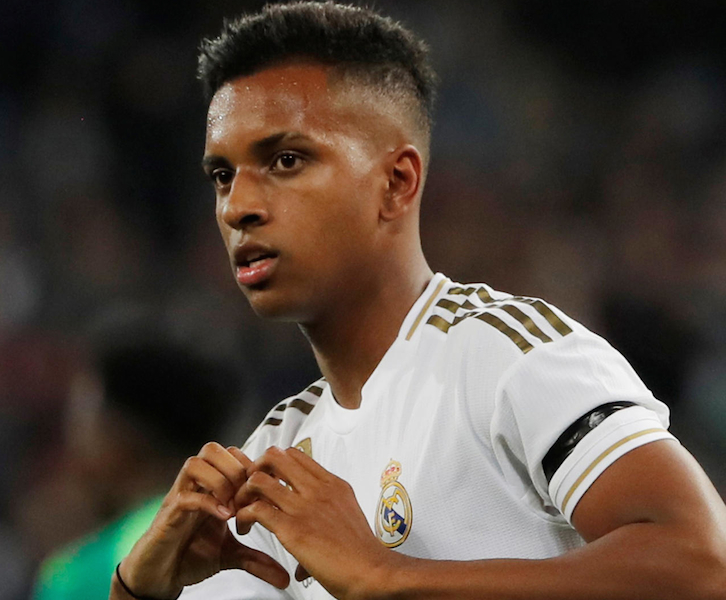 When Wales star Gareth Bale exited the Santiago Benerbau in the summer, Spanish-born Nigerian winger, Marvin Akinlabi felt he could fill in the gap left by Welsh man, and true to type, he was drafted to Real Madrid’s first team. Since then he has been struggling to convince Zinadine Zidane for a first-team shirt. Indeed the Nigerian wing-back’s dream came true when he made his full debut for the Los Blancos against Getafe midweek

Real Madrid manager Zinédine Zidane named Spanish-born Nigerian youngster Marvin Akinlabi in his starting lineup on Tuesday in his full debut for the first team since joining the club in 2016.
His two previous appearances prior to Tuesday’s fixture came against Real Sociedad and SD Huesca, logging 32 minutes in total in the two La Liga matches.

He has been on the fringes of the first team after impressing in a pre-season friendly against Getafe back in September.
Akinlabi, who is predominantly a right winger, was deployed as a right wing-back and he caught the eye before he was replaced by Sergio Arribas in the 55th minute after suffering an injury.
Zidane explained in his post-match press conference that his first change was supposed to be Vinícius for Arribas but he changed his plan after Akinlabi’s injury.

“Yes, we planned to take Vinícius off. But then Marvin Park hurt himself and we changed our plans,” Zidane told reporters.
Last year, Los Blancos informed via their official website that Akinlabi will represent their reserve team, Real Madrid Castilla as from the 2019-2020 season, which was a step up in the career of the attacking midfielder as he was a player of Real Madrid’s U-19 team penultimate season.

The Nigeria Football Federation (NFF), First Vice President, Seyi Akinwunmi, had before now said Akinlabi would soon get to play for the Super Eagles despite interest in the Los Blancos youth team kid from South Korea and Spain.

In the Spanish naming customs, footballers have two surnames, the paternal goes first and then the maternal one, so he has to be referred to as Akinlabi, not as Park, but he is called Marvin by the football community in Spain.
Akinlabi has been described by the official website of Real Madrid as a two-footed pacy and physical attacking-minded midfielder who is a danger when he joins the the attack, and his ability in one-on-one situations also makes him a threat.
He had stops at Sporting Ciudad de Palma, Tranmere Rovers, La Salle and Es Jonquet Penya Arrabal prior to joining the European champions in July 2016.

Should he pledge his international future to Nigeria, he would follow in the footsteps of Madrid-born Real Madrid product Derik Osede, who switched allegiance to the Super Eagles in 2015.

However, they should expect to face stiff competition from the Royal Spanish Football Federation and Korea Football Association who will want a talent such as Akinlabi in their ranks.
Akinlabi helped Real Madrid win last season’s UEFA Youth League and his strike against Inter Milan was awarded the best goal of the competition.