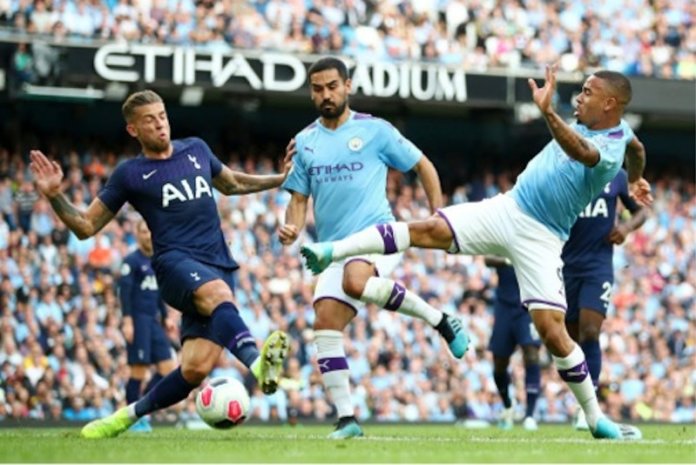 After a comprehensive victory over Liverpool last weekend, Manchester City extended their lead on the Premier League table to five points and will be hoping to intensify their grip at the top as the Citizens welcome Tottenham Hotspur to the Emirate Stadium today. While Pep Guardiola’s will be bouyed by a FA Cup quarter final berth on Wednesday, Jose Mourinho would require extra effort to motivate his side who were dumped out of the same competition midweek. The fierce rivalry between the two coaches will add an extra spice to the encounter as Mourinho’s top-four finish ambition will be put to test

Manchester City host Tottenham today, with Pep Guardiola’s men having a chance to go eight points clear at the top of the Premier League table, while Tottenham need a victory in order to keep in touch with the top four.

Guardiola’s side have been in unbelievable form, having won their last 15 games across all competitions. The Citizens have conceded only eight goals in their last 20 matches and look to be well on their way to silverware this season.

Jose Mourinho’s side have been in a rut of late. Tottenham have lost four of their last five games in all competitions and look completely off the pace.
Mourinho will need his side to pull off a huge performance against City today if they are to come away with anything from the Etihad.

Today’s clash is sure to be a fiery one, as it pits two legendary rivals against each other in Guardiola and Mourinho.
The Premier League head-to-head record between the two sides is split evenly down the middle, with both sides getting two wins over the other in their last five meetings.

Tottenham, however, can boast a UEFA Champions League quarter-final triumph over Manchester City in the 2018-19 edition of the competition.
Guardiola will be sweating on the fitness of star defender Ruben Dias, who missed Manchester City’s FA Cup clash against Swansea with a stomach bug. Spanish midfielder Rodri is also a doubt for the game, having picked up a knock during the FA Cup tie.

Kevin De Bruyne and Nathan Ake are out of the clash with injury while Sergio Aguero is not yet match fit.
Despite the absentees, City have demonstrated already during their ongoing winning streak that they can hope with absent star men, even if they are of the calibre of De Bruye and Aguero.

With the likes of Phil Foden, Raheem Sterling, Bernardo Silva and Riyad Mahrez likely to be let loose on this Spurs defence, Mourinho’s side could be in for another crushing defeat.
Mourinho on his part could be without both his starting full-backs. Sergio Reguilon picked up a muscle injury last month, while Serge Aurier injured his foot earlier this week.

Giovani Lo Celso is also out, as he is still recovering from a hamstring injury that occurred in December last year.
Form is thrown out the window for matches like this. Both Guardiola and Mourinho will know what to expect when their sides come up against each other. That being said, one side is clearly better than the other at the moment.

However, after their poor showing against Everton, Spurs will be desperate for any reasons for optimism ahead of their meeting with the league leaders.

Since Mourinho took over, they have at least won both of their fixtures against City, although sceptics may point out that both fixtures were in London, rather than at Eastlands.
In fact, City have a strong recent home record against Spurs, having won seven of their last 10 matches at home against the capital club—while losing only one!

Worryingly for the Lilywhites, they’ve won just one of their last six Prem away games, while you have to go way back to 1992 to find an away win for Spurs against a team leading the table at the time.
In the intervening years, Tottenham have lost 21 and drawn three against the league leaders.

MATCH FACTS
• Manchester City have won seven of the past 10 league meetings at the Etihad Stadium, only
losing on 14 February 2016.
• However, Spurs have won both league encounters – at home – with Jose Mourinho as their
manager.

• City are on a 15-match winning run in all competitions, a record for an English top-flight side,
and are unbeaten in 22 since their 2-0 defeat by Tottenham in November.

• They have only conceded three goals in their past 14 league games.
• Manchester City can equal the club record of seven successive home clean sheets in all competit
ions, set from December 1946 to March 1947.

• Pep Guardiola could lose three consecutive top-flight fixtures against the same team for the
first time as a manager.
• He and Jose Mourinho have faced each other in 24 games, with Guardiola leading by 10 wins
to seven.

• Midfielder Ilkay Gundogan is the Premier League’s leading scorer in 2021 with seven goals
in eight appearances. His previous seven league goals came over a period of 62 games.
• Spurs have won just one of their past six top-flight away fixtures (D3, L2). They could lose
consecutive away league games for the first time since October 2019.

• Tottenham are winless in 24 away fixtures against the team starting the day top of the table
since beating Blackburn in November 1992 (D3, L21).

• They are vying to beat both Manchester clubs away in the same top-flight season for the first
time since 1959-60. The last side to do so was Liverpool in 2008-09.

• Jose Mourinho could become the first manager to win three away games against a Pep
Guardiola side in all competitions, having triumphed with Real Madrid in 2012 and Manchester
United in 2018.
• Son Heung-min has scored six goals in his past eight appearances against Manchester City
in all competitions.

• Harry Kane only averages a Premier League goal every 428 minutes versus Manchester City,
his worst record against any of the 30 teams he has faced in the division. Kane has scored twice
in 10 appearances in this fixture, but none in the last six.