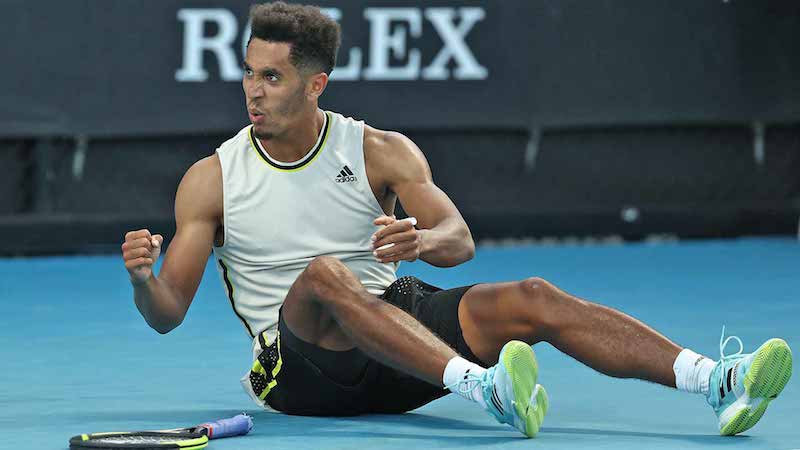 Michael Mmoh, son of former Nigerian tennis great, Tony Mmoh, yesterday missed the chance to stop Rafael Nadal’s bid for an outright men’s record 21st Grand Slam in the second round as he was beaten 6-1, 6-4, 6-2 by the Spanish second seed on the Rod Laver Arena of the ongoing 2021 Australian Open.

His father, represented Nigeria at the 1988 Summer Olympics in Seoul, where he was defeated in the second round by the Netherlands’ wild card entry Michiel Schapers.

The right-hander senior Mmoh reached his highest singles ATP-ranking on 19 October 1987, when he became the number 105 of the world. Mmoh played at the US Open (1985), Wimbledon (1987) and the Australian Open (1988) before calling it a day on his tennis career in the eras of the Nduka Odizor, David Imonitie and Sadiq Abdullahi.

But Down Under yesterday, the junior Mmoh who won the USTA junior national championship in 2016, before adding two ATP Challengertitles and four ITF Futurestournaments was no match for Nadal who will now meet Britain’s Cameron Norrie in the Australian Open third round after both won their matches on Thursday.

Mmoh who in September 2016, broke into the Top 300 for the first time by reaching the final of the ATP Challenger event at Tiburon as a qualifier and also In November, he reached the Top 200 and also won the 2017 Australian Open Wild Card Challenge largely by claiming his first career Challenger title at Knoxville, realized he still has a long way to go before attaining the level that has kept the Spaniard at the top for a long time.

Nadal who was playing next door to Norrie on the Rod Laver Arena and the manner of his victory against Mmoh – ranked 175 places lower than the world number two – was much more straightforward than the Briton’s nervy finish.

The 2009 champion showed no signs of the back spasms which troubled him in the build-up to the tournament, although there was one mishap – which was nothing to do with his opponent.

Instead, it was a rowdy spectator who broke Nadal’s rhythm. The woman disrupted the match by shouting obscenities and gesturing rudely as he prepared to serve for the second set.

A bemused Nadal asked if she was directing the abuse at him and laughed off the incident, only to be stopped again as she continued.

Eventually she had to be escorted out of the stadium by security, with cheers from the rest of the crowd accompanying her.

Unruffled, Nadal served out the set with a hold to love and went on to clinch the match with two more breaks in the third set.

The bizarre incident became the major talking point of a routine win – with the video clips flooding social media – and Nadal again saw the funny side in his on-court interview.

Asked if he knew the woman, a laughing Nadal said: “No – and honestly I don’t want to know.”

He added: “Maybe she took too much gin or tequila. I don’t know. Honestly, it was a strange situation but funny at the same time.”