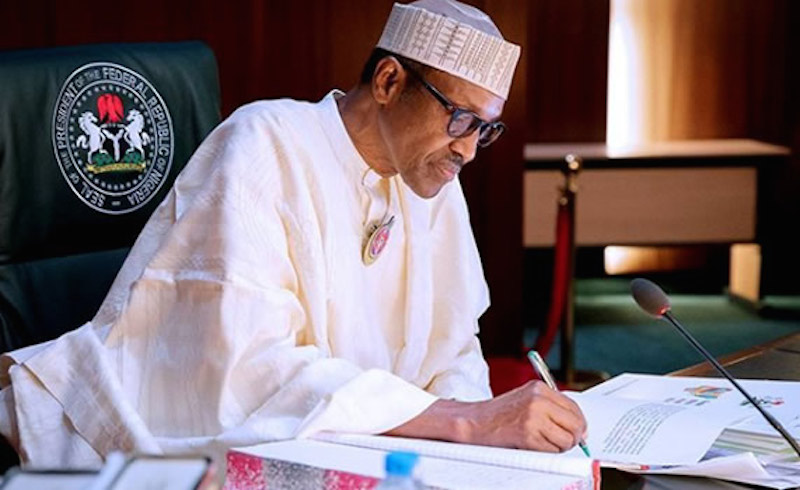 President Muhammadu Buhari has written formally to the Senate for the confirmation of the appointment of the newly appointed Chief of Defence Staff (CDS) and service chiefs.
He has also sought the consent of the upper legislative chamber for the appointment of the former Chief of Defence Staff (CDS), General Gabriel Olonisakin (rtd) and erstwhile service chiefs as non-career Ambassadors.
The two separate confirmation request letters were read on Tuesday at the resumption of Senate plenary after the Christmas break by the President of the Senate, Dr Ahmad Lawan.
The first letter dated January 27, 2021 read in part: “In compliance with the provisions of Section 18(1) of the Armed Forces Act. Cap A20 Laws the Federation of Nigeria 2004, I hereby forward for confirmation by the Senate, the appointment of the under listed officer as the Chief of Defence Staff and Services Chiefs of the Armed forces of the Federal Republic of Nigeria.
The appointees for confirmation are: Maj. Gen. Lucky Eluonye Onyenuchea lrabor – Chief of Defence Staff; Maj. Gen. Ibrahim Attahiru – Chief of Army Staff; Rear Admiral Awwal Zubairu Gambo – Chief of Naval Staff; and Air Vice Marshal Isiaka O. Amao – Chief of Air staff.
In the second letter, the President requested for the confirmation of ex- Service Chiefs as non- career ambassadors to Nigerian foreign missions.
Buhari’s request for the confirmation of ambassadorial desginates is contained in a letter addressed to President of Senate, Ahmad Lawan.
The President in the letter said:
“In accordance to section 171, sub-section 1, 2 C and Section 4 of 1999 Constitution of Federal Republic of Nigeria as amended.
“I have the honour to forward for confirmation by the Senate, the underlisted as non-career ambassadors designate.
“The non-career ambassadors designate include: Gen.Abayomi Olonisakin (Rtd) (Ekiti), Lt.Gen Tukur Buratai(Rtd), (Borno); Vice Admiral Ibok-Ete Ibas (Rtd), Cross River); Air Marshal Sadique Abubakar (Rtd) Bauchi) and Air Vice Marshal Mohammed S Usman (Rtd) Kano).
The Senate also received request for confirmation of appointment of Mr Adolphus Aghughu as the Auditor-General of the Federation as well as the confirmation of Mr Victor Chinemerem Murakor as Chairman of the Fiscal Responsibility Commission (FRC).
The upper chamber also received request for confirmation of appointment of Mr Larry Obinna Chukwu as Commissioner representing South-East at the Nigerian Law Reform Commission.
It also received Buhari’s request for confirmation of Wakari Bukar as Commissioner representing Yobe, Borno and Bauchi states at the Federal Civil Service Commission.