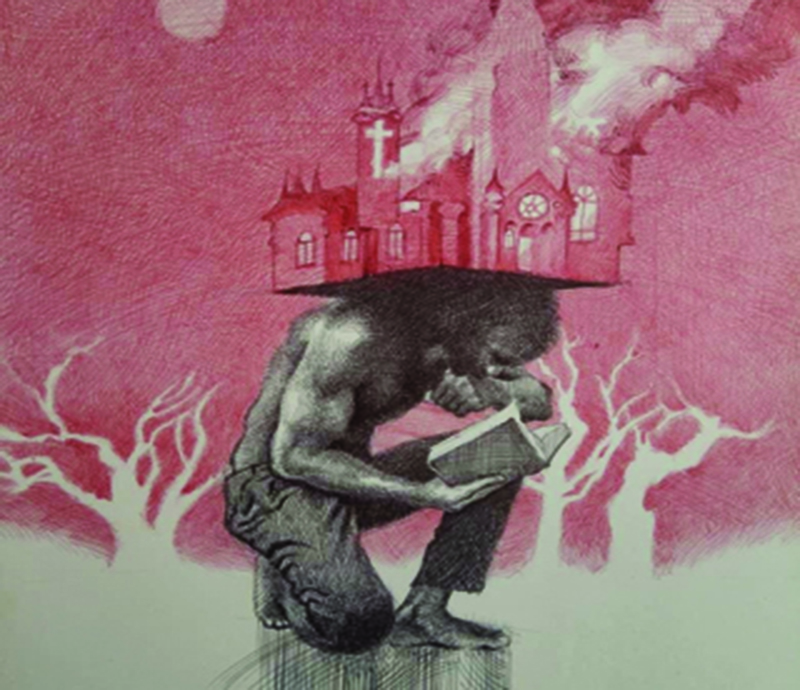 EXHIBITION
C. Krydz Ikwuemesi
This exhibition of painting and drawing by Stanley Ugonabo, titled Dreams, is the first to be hosted by Sankofa Centre for Art and Creative Education, Enugu, since its inception in 2017. It is also Ugonabo’s maiden exhibition following his graduation from University of Nigeria in 2019. It is a mixed bag of styles, techniques, visions and emotions. As an emerging young talent, Ugonabo is keenly in search of a voice, as can be seen in these works, but at the same time, it may not be long before he finds it, as he exhibits supreme confidence in his handling of form and configuration of evocative power of content. This he does in full recognition of art’s capacity as an “intelligent, thought provoking activity”, as he pushes his techniques and styles to the limits of possibilities.

Even his concept and vision are subject to a broad stretch of the imagination, as he plays with common and divergent elements that straddle both realist and surrealist idioms. To a great extent, forms as well as contents are enriched by the artist’s striving for superlative draughtmanship and his ability to domesticate both form and colour in a way that yields thought-provoking imagery couched in profound and alluring metaphors.

As implied in the theme of the present collection, the artist offers us selected glimpses into this very fertile and restless mind to behold his visions, his dreams in their cleverly concretised, forms. In contemplating the works, we easily share in Ugonabo’s hierophantic experience. We are pleasantly hit by the works like some esoteric, mystical chants. They are not our everyday chant. But we do not care. They appeal to our emotion as they do to our reason and philosophy; but we are also held in empathetic captivity by the works’ hidden centralising meanings which are hinged on issues of being, existence and mundane challenges

Perhaps one major strength of the collection is the commanding presence of the human figure which betrays Ugonabo’s burgeoning Renaissance Spirit. To this extent, man, for him, is not merely “the measure of all things”, but an epitome of creation’s highest and noblest beauty, as declared by the polyvalent Renaissance artist, Alberti: To you is given a body more beautiful than other animals! But unlike the great men of the Renaissance, he takes the human figure to another level, the level of the surreal and the mystical where things and experience attain a higher meaning and signification. By this token Ugonabo is dressed not only in the garb of a powerful artist but also wears the crown of a philosophical and imaginative thinker.

As we present him here at Sankofa, we hope that this maiden exhibition will lunch him to new frontiers and higher achievement and that he will sooner or later find his compass and place in the ever shifting art fields in Nigeria and elsewhere.
• This exhibition opens on Tuesday, February 16 and ends on Monday, March 8

• Professor Ikwuemesi is the Director, Sankofa Centre for Art and Creative Education, Enugu