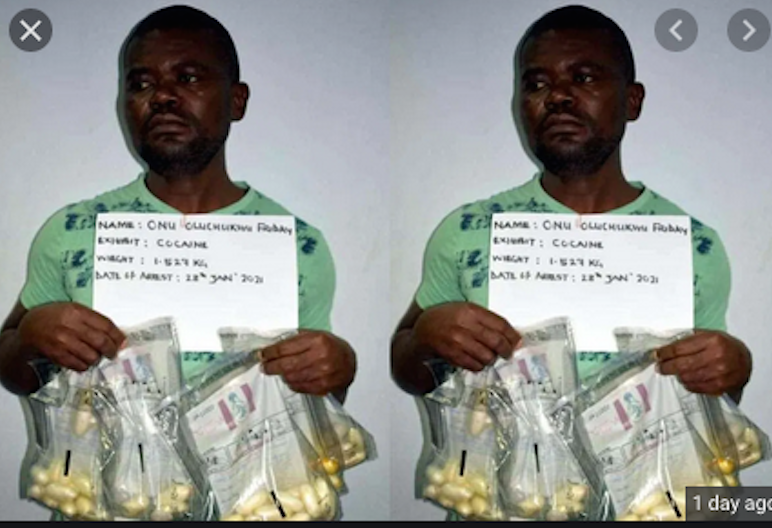 A native of Umuaku-Isiochi
village in Abia State, Onu was intercepted at the boarding gate screening and referred for scanning where he proved positive for ingestion.

He excreted 83 wraps of substances, which proved positive for cocaine after the drug test and weighed 1.527 kilograms.

The suspect, a Lagos based dealer in building materials was promised N1.5 million upon successful delivery to a recipient in New Delhi, India.

In a statement in Abuja yesterday, the Deputy Commander of Narcotics (DCN), Jonah Achema, quoted the suspect as saying: “I deal in building materials in Lagos. I decided to undertake this journey so that I can use the money to support my business. I have lost so much money during this COVID 19. So I need other source of income.”

Onu, a primary school leaver, got married last year and the wife is expectant.

However, NDLEA’s Commander at the Abuja Airport, Kabir Tsakuwa said investigation “is on to dismantle Onu’s drug trafficking network.

“This arrest is spectacular in that it is about the highest number of wraps to be swallowed or ingested by an individual. We have also discovered that this is the first case of cocaine moving from here to India.

“We will explore and exploit all angles in ensuring that this particular drug chain is disrupted and dismantled,” Tsakuwa was quoted in a statement.

Upon his appointment last month, NDLEA’s Chairman, Brig.-Gen. Mohammed Buba Marwa gave marching orders to commanders of the agency in all states and special commands to mop the nation of illicit drugs.

Marwa said: “All commanders must be desirous of keeping drugs out of Nigerian streets and homes, and so, all of you must shape up and get all those engaged in the nefarious business to face the music.

“I need results from now on. Our maxim will be offensive action. This means we must go all out constantly on the offensive against the bad guys.

“The success we make of this particular task goes a long way to determine the socio-economic stability of the nation. We need not be told of the nexus between drug use, crime and acts of criminality.

“The exponential growth of the nefarious drug activities can be directly linked to the upsurge in crimes such as insurgency, terrorism, kidnapping, cultism, political thuggery, gangsters, rape and other maladaptation bedeviling today’s Nigeria.

“It is not going to be business as usual. It is a moving train. Please, let nobody stand in its front. The train will crush any such person. To be forewarned is to be forearmed. To the unbending drug crime perpetrators,

“I would like to let them know also that the game is up! It is high time they embraced another trade. The Federal Government’s policy on agriculture is a window for them to leverage on.”