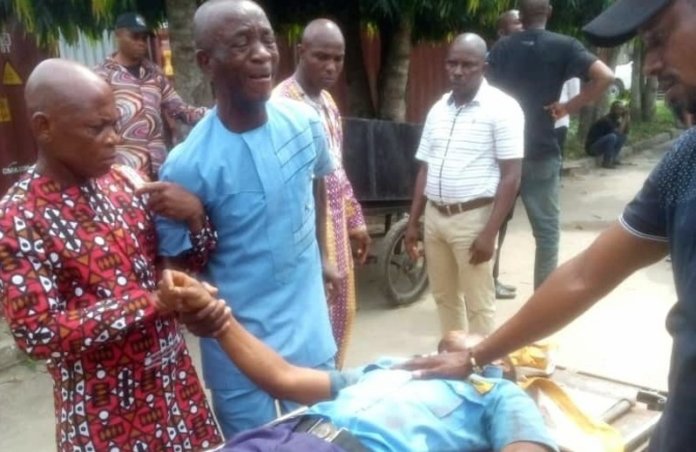 Mrs. Florence Gbaraka, the mother of late Gospel Gbaraka who was allegedly shot dead by his colleague in November last year, has demanded for justice for the gruesome murder of her son.

Addressing journalists yesterday in Port Harcourt, Rivers State, during a briefing organised by the Coalition of Concerned Civil Society Organisation, Gbaraka lamented that her bread winner was unjustly killed by a Marine Police colleague in his place of work.

She said after graduation, her son promised to take care of her, lamenting that he had been sent to his early grave.
“My son has been telling me that he would take care of us after he graduated from school. He has consoled us that it will be better when he gets a job. He did not offend anybody but he was killed right in his place of work. I need justice,” she lamented.

Also speaking, Emmanuel Gbaraka, cousin to the victim, narrated how the young man was killed by his colleague in their company premises.

He said: “He was a graduate of Accounting from Abia State University, a 32 years old man. Because of the challenge of this country, he wasn’t a criminal, he decided to pitch his tent with Prudent, a security company situated at Rumuodara which engaged him.

“My cousin Gospel, was posted to a company at Abonnema where he was until he met his untimely death. “In the early hours of Saturday, November 21, 2020 at about 6a.m., we received the sad news of his killing. We were told that one Inspector James Nwabara, a Marine officer with the Nigeria Marine Police who works with him in the same company shot him dead.

“We were told Inspector Nwabara shot my brother by saying that intruders entered the company’s premises. We then wondered how he could not arrest or shoot at the intruders but killed a man that works with him.
“From then till now, it is only God that has been sustaining my uncle and his family because the victim had always been the bread winner of his father’s house”.

Meanwhile, the Civil Society group led by Mr. Amaechi Kelechi Justin, has noted the inequality in the administration of justice in Nigeria, stressing that justice was incomplete if all suspects involved in the torture of a victim were not prosecuted.

The group also frowned at the exclusion of the Commander of the E-Crack unit, Benson Abidoye, and the Investigating Police officer in the case of the Ikoku five pending at the court.

The group in its defence of human rights has given the “Attorney General of Rivers State and other relevant authorities a 14 day ultimatum to open up prosecution of SP Benson Abidoye and the IPO in order to avoid a second wave of multiple escalation of this matter both nationally and internationally”.
They added that they will “Continue to fight for justice and when the ultimatum is ignored will consult higher bodies to intervene for justice”.

Vice President Osinbajo, in a telephone call to Oyinlola, while wishing him a happy birthday prayed for God’s continued blessings for the former governor. He also prayed for Oyinlola’s long life and for God’s protection over him and his family.

Also, Ekiti State Governor, Dr. Kayode Fayemi, in his own message, described Oyinlola as an epitome of courage, dignity and character.

Dr. Fayemi in a congratulatory letter personally signed by him said Oyinlola stood out among his peers not only because of his nobility but also because of “his enormous gift of garb, wits and inner stamina”.
The Chairman of the Nigerian Governors Forum stressed that Oyinlola had earned the respect of many people as a very loyal and forthright gentleman who never betrays any cause to which he is committed.

“My Egbon, as I fondly refer to him, is a very loyal and forthright gentleman who never betrays any cause to which he is committed. His forthrightness and frankness sometimes pitches him against those who would prefer guile and deception, but for the Okuku prince, fidelity is the highest form of honour. Even before now, he has always been elderly in conduct and wisdom. A truly prince in courage, dignity and character.”

Similarly, Minister of Transport, Rt. Hon. Chibuike Amaechi said in a tribute that Oyinlola’s years “have been well spent in the service of humanity” as well as his commitment to the progress and development of the common man and indeed the nation at large.”

He added that Oyinlola “as a visionary leader” always inspired others “to lead, innovate, grow, develop and explore.
“Once a Military Administrator of Lagos State and a colleague as civilian Governor of Osun State, the reforms you instituted still have direct bearing on the lives of people in these States. We have remained partners in politics having identified your patriotic zeal for a better Nigeria and I am indeed honoured to associate with you even as a younger brother,” he said.

Former Senate President, Senator David Mark, in his own goodwill message said he was pleased to note in particular that Oyinlola’s “tenure as Military Governor of Lagos State and Executive Governor of Osun State recorded immeasurable achievements that earned you the accolades of Nigerians.

“Available records of your services in both states indicate that you left your positive footprints in the sand of time. The people still sing praises of you, years after you left office.
You have continued to avail the younger generation your wealth of experience and knowledge in leadership and administration. Your leadership as President of the Nigeria Golf Federation (NGF) is indeed exemplary. I am proud of you,” he said.