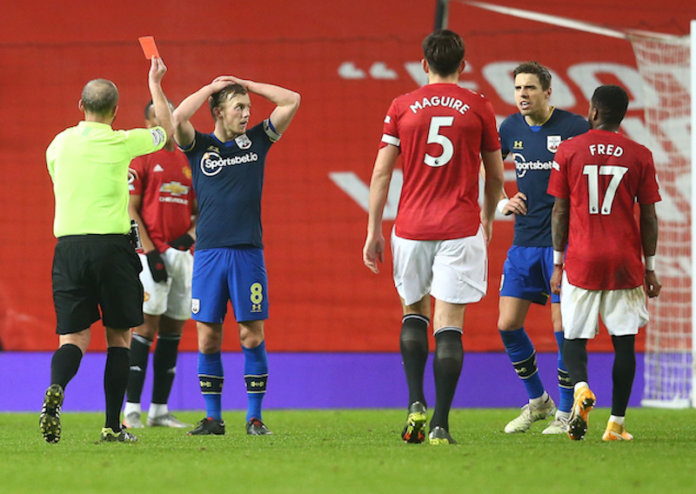 Southampton have succeeded in their appeal against Jan Bednarek’s suspension following his contentious red card in Tuesday night’s 9-0 defeat to Manchester United.

Southampton appealed to the Football Association, who have upheld their claim of wrongful dismissal, meaning Bednarek will be available for their upcoming games, including Saturday’s trip to Newcastle United.

That decision, plus others during their defeats to Aston Villa last Saturday and United on Tuesday, led to Southampton making the extraordinary request that Dean and Lee Mason aren’t allowed to officiate their games in the near future.

A statement by the FA read: “Jan Bednarek will be available for Southampton FC’s next fixture after an independent Regulatory Commission upheld a claim of wrongful dismissal and removed his suspension.

“The defender was sent off for denying an obvious goal scoring opportunity during a Premier League fixture against Manchester United FC on Tuesday night.”

Southampton were losing the game 7-0, having been reduced to 10 men after only 79 seconds when Alex Jankewitz was sent off for a horror tackle on Scott McTominay, when Bednarek was adjudged to have fouled Martial in the box three minutes from time.

There appeared to be minimal contract but, after a VAR check at the pitchside monitor that lasted several minutes, Dean pointed to the spot and flashed a straight red card at Bednarek.

He protested while walking down the tunnel, with television microphones recording him saying ‘Martial said it’s not a foul’.

The rules state that if the offending player makes an attempt to play the ball, as Bednarek did, then it should only be a yellow card in such a situation.

Southampton were so incensed, they requested a meeting with referees’ body PGMOL to demand that Dean and Mason, who took charge of their 1-0 home loss to Villa on Saturday, when Dean was VAR official, don’t officiate any of their games in the near future.

It came after they were denied a penalty when Villa’s Matty Cash appeared to clearly handle the ball in the box and then saw a stoppage time equaliser by Danny Ings chalked off for the most marginal of offside calls.

And earlier in their loss at Old Trafford, at 4-0 down, Che Adams saw a goal disallowed for another fractional offside call.