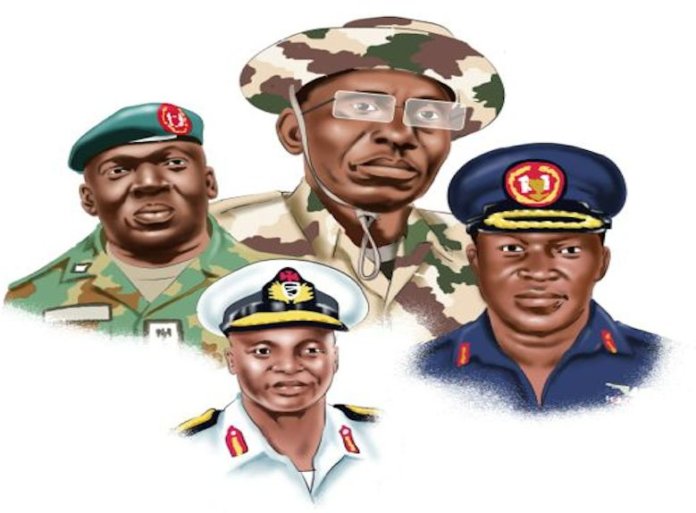 For more than two years, President Muhammadu Buhari ignored the call by many stakeholders, including the National Assembly, that he should ease out his service chiefs who had all passed their retirement age and whose efforts, by his own admission, “were not good enough”. Last Tuesday, the president finally acted by appointing new service chiefs. The officers, Major General Lucky Irabor, (Chief of Defence Staff), Major General Ibrahim Attahiru, (Chief of Army Staff), Rear Admiral Auwal Gambo, (Chief of Naval Staff) and Air Vice Marshal Isiaka Amao (Chief of Air Staff) must understand that to whom much is given, much is expected.

In the past few months, the Northeastern states of Borno, Yobe and Adamawa have been under frequent attacks by the Boko Haram insurgents and their more vicious variant, Islamic State West Africa Province (ISWAP). Some local governments reportedly had fallen back into the hands of the brutal sect. The hitherto quiet Northwest has become a haven for bandits and extreme Islamists. Niger State in the North Central is increasingly being infiltrated by the extreme insurgents. The entire country is awash with guns – many in the wrong hands and the country is under persistent threats.

The new service chiefs, in effect, means a renewal of hope, that things would change for the better. They are all tested generals. Yet expertise is not sufficient. To succeed in their assignment, they must address the welfare of the fighting troops. While military service is a national sacrifice, it is not a suicide mission. Not giving soldiers the tools to fight and dismissing them when they complain is not only unfair, it is unjust.

Every counter-insurgency war is first a psychological operation. The troops on the battlefield must themselves be motivated and in fact ‘drunken’ adherents and advocates of the national spirit. When the source of troop morale in any war is reportedly in short supply or missing, there is a problem. In the current phase of the war against insurgency, food and other welfare items are reportedly sometime rationed, besides issues of outstanding payments and entitlements to families of fallen officers and men. This is not to mention guns and ammunition vital for the successful prosecution of any war. Therefore, all old weaknesses must be remedied and new strengths added to the fighting force. Irabor and his men must deploy all the necessary instruments and resources to restore confidence in the troops. These, accompanied with synergy among the chiefs, and better coordination of intelligence, will make a difference.

While we believe that the capacity for havoc by Boko Haram has been degraded by the military, it is also true that the policy put in place to win the war is not working and is draining the military and political authorities of the goodwill of most Nigerians. Part of the reason is that many of the officers and men in the frontlines are not properly psyched to do their job. Which then explains why, for almost two years now, the insurgents have, through daring raids, attacks and seizures, put a lie to the much-touted view that the war against insurgency is ‘technically over’. In fact, Boko Haram and terror affiliates have exacerbated their asymmetrical warfare and executed successful attacks, invaded and overrun military bases, and in the process killed hundreds of civilians and military personnel.

Meanwhile, the release in 2015 of the sum of $20 million to the Multi-National Joint Task Force (MNJTF) so as to facilitate the logistics of the war has not yielded much results. Nor has the several regional strategy sessions aimed at urging the international community to sign-in to the plan aimed at uniting efforts of the neighbouring countries in tackling the Boko Haram menace. The failure of the Chad Republic to deploy troops to its own borders as agreed to by the MNJTF has created a weak link in the overall strategy to rein-in the insurgents. Nigeria needs to renew its commitment by giving more attention to the coordination of all international efforts towards winning the war.

All said, we believe the war against the insurgents is winnable. All that may be required is for the military to not only sustain the tempo of attacks but also to continually devise new strategies that will put them ahead of the plans of the terrorists. This is the task before Major General Irabor and his men. We wish them success in their new assignment.

Quote:
Irabor and his men must deploy all the necessary instruments and resources to restore confidence in the troops. These, accompanied with synergy among the chiefs, and better coordination of intelligence, will make a difference