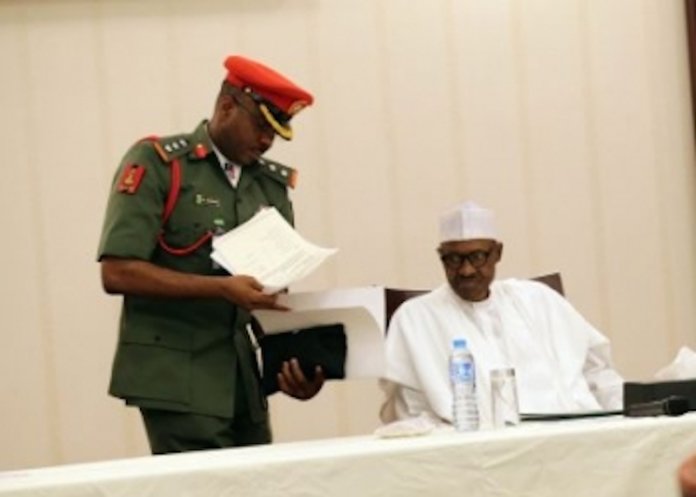 President Muhammadu Buhari has appointed a new Aide-De-Camp in the person of Lt. Col. YM Dodo, a development, which emerged Saturday.

With this, however, Buhari made a significant change in his personal security architecture.
His appointment, it gathered, followed the exit of the former ADC, Col. ML Abubakar, who has gone for a promotion course.
A source that revealed this insisted that contrary to insinuations, Abubakar was not sacked but exited the position to attend the course that is required for him to go to his next rank of a one-star general.

As such, he at all times kept vigil over the president and was about the first and last person to go to bed and rise from bed.
He maintained a presence around the president to the extent of standing at his back ensuring that the president has his back covered in any eventuality.

In that position, he also carried out personal duties of the president including holding his mobile phones, carrying notes and other personal effects and medicines that the president might require from time to time.

The new ADC, it was gathered, was the Academy Adjutant at the Nigerian Defence Academy (NDA), Kaduna State.
The course Abubakar is attending in Santiago Chile is a prerequisite for his next promotion to the rank of Brigadier-General in the last quarter of 2021 and posting outside the shores of the country as a Defence Attache/Adviser in keeping with the customs and tradition of recognising Officers that served as Aide-De- Camp to the President and concluded tour of duty without any blemish.

Abubakar, who will by the end of February, be the longest serving ADC to a civilian president (having served in that position for almost six years), and the second longest serving ADC in the history of Armed Forces of Nigeria after late Colonel Walbe who served General Yakubu Gowon for nine years.

The office of the ADC to the President statutorily provides security and protects the President and his family in conjunction with other security agencies. Customarily, the ADC attends to the personal needs of the president and other matters regarding his functions as the Head of State of the Armed Forces and the well-being of his family.

Officers who are to be nominated to be ADC to the President, must be loyal, of high morale standard, impeccable character, courage, knowledgeable as well as high level of integrity.
Abubakar, is a tested and experienced commander, trained and disciplined Instructor, Security manager and a talented Investigator.

The President had stated in Abubakar’s 2020 Annual Performance Evaluation Report, that the officer is disciplined, highly committed and loyal officer, sociable and amiable to his superiors and subordinates alike.

The C-in-C highly recommended Col Abubakar for promotion to the rank of Brigadier-General when due in October 2021 accordingly. Buhari had stated: “Congratulations Col Abubakar for a meritorious and a successful tour of National Duty as Aide-De-Camp to the Commander in Chief of the Armed Forces Federal Republic of Nigeria. It was indeed a privilege.”

The Senior Special Assistant to the President on Media and Publicity, Mallam Garba Shehu, when contacted confirmed the new postings to THISDAY on Saturday.
Shehu had replied to THISDAY’s enquiries saying “Yes, it is true the President now has a new ADC”.