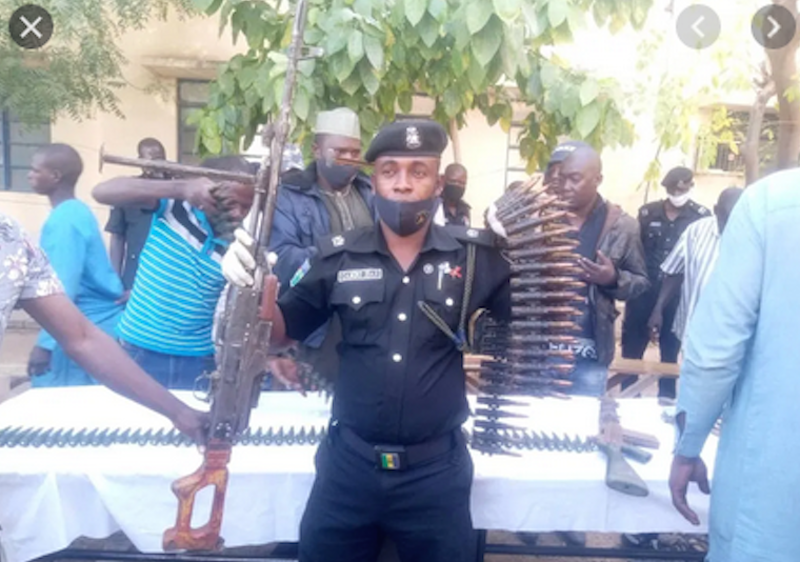 A notorious gun-runner, Haruna Yusuf of Sawarya village in Kaita Local Government Area of Katsina State, yesterday admitted before police authorities that he sold 20 AK-47 rifles to bandits terrorising communities in the state for N600,000 each.

The 47-year-old suspect, who was among other suspected gun-runners and bandits paraded by the Katsina State Police Command, added that he also sold three General Purpose Machine Guns (GPMGs) for N4,000,000 to the marauding bandits.

He confirmed that he bought the sophisticated weapons from one Hussain from Damagaram in Niger Republic and ferried them into the country through illegal routes within border towns in Katsina.

Haruna, who was nabbed by police in his residence in Sawarya village with 179 Anti-Aircraft ammunitions, said he also sold over 5,000 ammunition to the hoodlums operating in the state.

Parading Haruna alongside other suspects, the State Police Commissioner, Sanusi Buba, said the command after getting credible information about the criminals, raided their hideouts and recovered two GPMGs, 179 rounds of Anti-Aircraft ammunitions, one Lar riffle and currencies of different denominations.

He said the prime suspect confessed to being the gang leader as he usually received the supply of arms and ammunition from Niger Republic, which he handed over to Lawan Zayyana, Haruna Adamu and Auwal Abubakar of Muduru village in Mani Local Government Area of the state.

He expressed worries about the influx of arms and ammunition in the state, attributing the scenario to the porous land borders.

He, however, said the command would continue to work assiduously with other security agencies in the state in order to tackle banditry and kidnapping in the state.