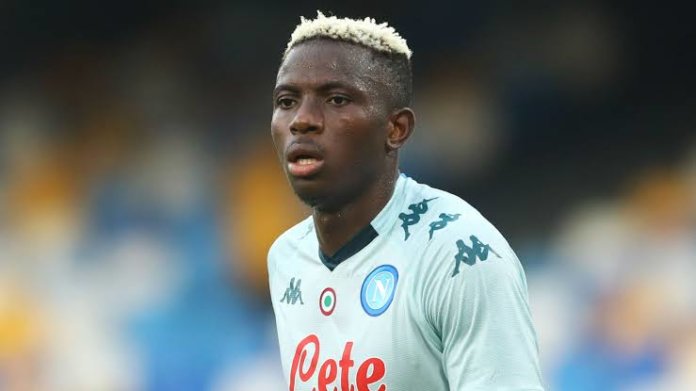 Super Eagles’ forward, Victor Osimhen, made his much-awaited Serie A return for Napoli but it ended in 1-3 shock defeat at Hellas Verona yesterday.

The AFCON 2019 bronze medal winner with Nigeria last featured for the Parthenopeans in November against Bologna due to injury and coronavirus problems.

The centre-forward suffered a shoulder injury on international duty with Nigeria against Sierra Leone in a 2022 Africa Cup of Nations qualifiers in Benin City.

Osimhen again suffered a setback when he tested positive for Covid-19 after returning from Christmas break in Lagos where he attended his birthday party.

The 22-year-old was isolated for 21 days before testing negative for the virus and immediately teamed up with the rest of Gennaro Gattuso’s men in training.

The forward was handed his 10th appearance across all competitions for the Parthenopeans at Stadio Marc’Antonio Bentegodi since teaming up with the side from Lille in the summer.

Napoli started the game brightly when Hirving Lozano opened the scoring only one minute into the game after receiving a timely assist from Diego Demme.

Federico Dimarco then levelled matters for Hellas Verona in the 34th minute after he was set up by Marco Davide Faraoni.

Antonin Barak then gave Ivan Juric’s men the lead moments before the hour mark after benefitting from an assist from Mattia Zaccagni.

In an effort to try and avoid defeat, manager Gattuso brought on his club-record signing, Osimhen, in the 65th minute for Andrea Petagna.

The Nigeria international had six touches on the ball and had a 50 percent successful pass rate in the encounter but could not help his side from avoiding defeat as Zaccagni sealed the victory for Verona in the 79th minute.

Senegal international Kalidou Koulibaly was on parade for the entirety of the game and received a caution in the 71st minute.

With the loss, Napoli dropped to the sixth spot on the Serie A table following their inability to add to their 34 points.

Osimhen will be expected to deliver a more impactful performance when the Parthenopeans take on Spezia in a cup tie on January 28.

Napoli are now winless in their last two games after also suffering defeat against Juventus in an Italian Super Cup tie last time out.