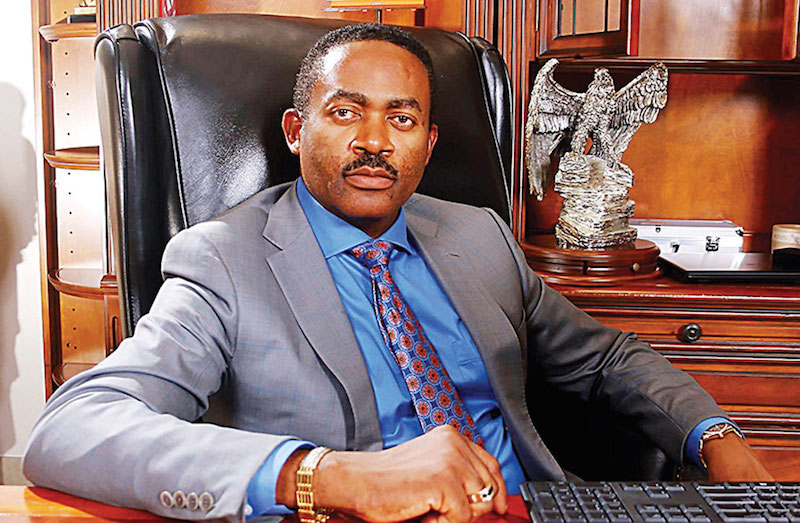 David-Chyddy Elekr writes that Dr. Godwin Maduka, a governorship aspirant in Anambra State on the platform of the Peoples Democratic Party may have been encouraged by the applause for the profound transformation he has brought to his community, Umuchukwu, which he plans to replicate in the state

There is a popular saying that a tree cannot make a forest. This can be given many interpretation, but in Umuchukwu, Orumba South Local Government Area of Anambra State, one man has defied that saying by singlehandedly building diverse infrastructures in the community, including giving it a new name, making people to refer to him as the tree that makes a forest in the community.

Today, the once sleepy and agrarian community which was formally known as Nkerehi, a border community between Anambra and Abia State has become a sprawling city, hosting the best road networks, hospitals, electricity, schools and modern church buildings among others. The community also habours the tallest building in the South-eastern part of Nigeria, a 17-floor skyscraper, which houses a medical laboratory and research institute, all courtesy of Dr Godwin Maduka.

Maduka, a Medical Practitioner, based in the United States of America (USA) is the MD/CEO of Las Vegas Pain Institute and Medical Centre, USA is also a governorship aspirant in Anambra State. He is running to pick the ticket the Peoples Democratic Party (PDP), which he hopes to run for the governorship seat with, in November this year. In a recent interview with THISDAY in his community, during a youth fiesta which he sponsored, Maduka when asked what he intends to do differently in Anambra simply said, “I am not telling you about things I can do or will do, I am telling you about things I have already done in my community, even though with my personal resources.”

Maduka also built magnificent duplexes for Anglican and Catholic Priests in the community. He built two Cathedrals, one each for the Anglican and Catholic churches, a four-storey Trinitas Hospital and Maternity for indigenes of the community, Immaculate Conception International College 1 and 2 , with buses donated to them, a Standard Divisional Police Headquarters for security, personally inaugurated by the former Police Inspector General of police, Mr. Mike Okiro.

He also built a magnificent Magistrate Court, a state of the art High Court, a standard market called (Afor Market) containing over 500 roofed open stalls, and over 100 lock up stores, all given out free of charge to traders. He also built a world class barracks for the Nigeria Security and Civil Defense Corps, two Monasteries for churches, a Civic Centre for the Community and another Community Hall for his own Village.

In Umuchukwu community, Maduka solely championed a change of the community’s name from Nkerehi to Umuchukwu, a name which means ‘God’s children’. He has also upgraded the community with other infrastructure, including a modern post office, transformers to boost electricity in the community, mighty edifices for Primary and Secondary Schools. He built five magnificent duplexes for five of his aides, a gigantic Palace for the traditional ruler and donated a brand new SUV to him.

He also constructed three bridges linking his community with nearby villages. He built five star hotels known as Lion of Africa Resort, constructed over 100 kilometres of roads network within Umuchukwu and other communities, donated Innoson vehicle security trucks to Police and other security agencies. The 17 floor skyscraper world class international Hospital/Health Research Institute he built in the community is said to be the tallest private hospital in Africa.
He donated 100 motorcycles to the unemployed and underprivileged members of his community, scholarships to students to study at universities both in Nigeria and overseas, training of medical doctors and other academics from the community, contribution to the building of a church in Oko, donation of millions to the religious, including the library building of Pope John Paul 11 in Major Seminary Okpuno, Awka and many others are the contributions of the medical doctor turned politician in the community. Today, Maduka is seen as the face of Umuchukwu community.

Speaking with THISDAY recently, Maduka said he was motivated to do the things he does because as a growing up boy in the community, he suffered as a result of lack of infrastructure. According to him, “I embarked on all these to save my people from the ugly experience I had while growing up. I come from a poor family. In the house where my family lived, when it rained, it rained more inside our house than it did outside. Wealth would be meaningless if it could not be used to better the lives of the people around the custodian.” His experience those days opened his mind to what other poor people are still experiencing, and his resolve to give a helping hand to the less privileged.

Speaking also about his educational background, Maduka said he considers himself the most educated of all those who are running to become governor of Anambra State. “I am also the most detribalized, cosmopolitan and urbane. Among the aspirants, I am a triple Professor, number eight out of top 10 Nigerian-American doctors.

A full profile of Dr. Maduka’s educational background shows that, he completed a Doctor of Pharmacy Degree from Mercer University in Atlanta, Georgia in 1988 with a scholarship after completing his Bachelor of Science Degree in Chemistry with first class, from Rust College in Holly Springs, Mississippi in 1984. After graduation, he worked as a pharmacy technician, before getting a full scholarship to study Medicine at University of Tennessee, where he completed an internship and graduated in 1993.

He said, “I have great plans for Anambra State and Anambra people. I just addressed a group of market women association who came to pay me solidarity visit. I told them we will stop flooding this place with things we can produce, once I become governor. People may say that government has limited resources, but let me ask you, have you ever looked into the books of government? The one they call security votes, has anyone ever accounted for them?

“The advantage is that I am one person who knows where to find funds to build infrastructure. It is not about government funds. I know where to source funds, and I also have my personal money. I am going to use my money to run government. As a private citizen, I have been doing it, and we will do more. In this community and beyond, I have built government institutions. I have built schools, churches of all denominations. I built the 17 floor building for medical research, and young people are all employed here. These are things that government should build. I built courts here for the government, I built judges quarters, I single handedly built police stations here, and currently I am building and donating to the federal government a police college. They are all my personal money,” he said.

Though he is still seeking the ticket of the PDP for the November 2021 governorship election, he acknowledges that so many other aspirants were in the race for the ticket. He urged Anambra people to vote only those who have the interest of the state at heart and have gathered enough experience to change the state. Among top contenders contesting the ticket of the PDP with Maduka are; Hon Chris Azubogu, Dr Obiora Okonkwo and Mr Emeka Etiaba, among others.

Maduka said he considers himself the most educated of all those who are running to become governor of Anambra State. “I am also the most detribalized, cosmopolitan and urbane. Among the aspirants, I am a triple Professor, number eight out of top 10 Nigerian-American doctors. A full profile of Dr. Maduka’s educational background shows that, he completed a Doctor of Pharmacy Degree from Mercer University in Atlanta, Georgia in 1988 with a scholarship after completing his Bachelor of Science Degree in Chemistry with first class, from Rust College in Holly Springs, Mississippi in 1984. After graduation, he worked as a pharmacy technician, before getting a full scholarship to study Medicine at University of Tennessee, where he completed an internship and graduated in 1993