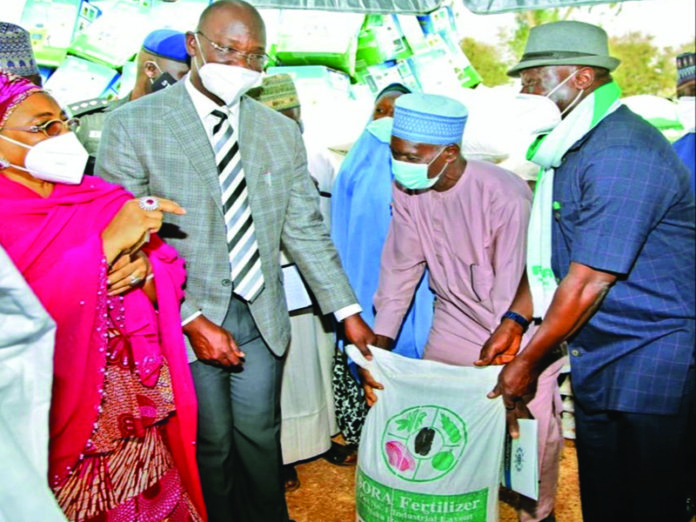 One circle of food production can no longer sustain the growing population of Nigeria hence a concerted efforts by the Nasarawa State government to cultivate the dry season crops, reports Igbawase Ukumba

Agriculture, being the major occupation of about 80% of the Nasarawa State population and the state being endowed with fertile land and good climatic condition, suitable for the production of arable crops for both domestic consumption and export, the administration of Governor Abdullahi Sule is, therefore, committed to effective distribution process in the delivery of farm inputs to teeming farmers, to ensure an all-year-round farming, with a view to attaining sustainable food production in the state.

It was against this background that the administration has gone a long way by not only encouraging agricultural productivity, but also ensuring how post-harvest could be improved, as well as reduce losses to the minimum.
In the same vein, the National Centre for Agricultural Mechanization, Ilorin, in collaboration with the Nasarawa State government, organised a field day, where different types of farm equipment were demonstrated to enable the farmers purchase them for value addition, as well as reduce drudgery in their farm operations.
Similarly, post-harvest technologies were demonstrated by a German Company, Riela, at Shabu Integrated Farms in Kokona Local Government Area of the state.

Fascinated by this technology, Governor Sule, when kicking-off the sales of fertilizer and farm inputs to dry season farmers of the state, said the state government intended to place order for the purchase of 250 sets of portable improved hand maize shelling equipment for distribution to teeming farmers in the state.
“Furthermore, we have also keyed into the federal government initiative through collaboration and partnership with critical development Partners towards agriculture value chains development.

“This include the IFAD/FGN Value Chain Development Programme in which the sum of N176 million has been released as counterpart funds by the state government; the sum of N72 million has been approved, which will soon be released as counterpart fund for UNDP/GEF Food Security and Resilient Project in the state; and JICA and GIZ to boost Agriculture Extension Services delivery in the state,” the governor added.

He noted with appreciation the harmonious relationship existing between the state government and the Federal Ministry of Agriculture, which informed the tremendous benefits the state enjoys, particularly the donation of 990 metric tons Ruminant Feeds and 80 tons Mineral Salt Licks distributed to Pastoralist and Livestock Farmers in the state.
The governor also appreciated the Federal Ministry of Agriculture for the construction and equipping of an Animal Health Service Centre in Karu, donation of Veterinary Consumables as well as the implementation of REDISEE Project, the posting to the state of two Veterinary Doctors and donation of four tricycles, among other consumables.

Governor Sule stated that the commencement of sales of 300 metric tons fertilizer and distribution of other farm inputs to dry season farmers was a further demonstration of his avowed commitment to the development of the agricultural sector. He declared that the fertilizer would be sold at a subsidized price of N5,000 per bag, even as he charged the beneficiaries to ensure judicious use of the commodity to increase their yields for enhanced benefits.

“Let me, however, warn that those handling the fertilizer sales will be held responsible for any anomaly in the distribution of the fertilizer in their respective domain. Coordinators at various levels are to ensure remittance of sales to the designated bank accounts, as any misappropriation will be meted with appropriate sanction. I should also caution individuals and groups against purchasing the commodity and selling to farmers at exorbitant rates,” Sule warned.
Nevertheless, the food production in Nigeria is facing challenges caused by the effect of climate change, which include flood disaster in the northern and central Nigeria, poor rain in the southern part of the country and the ongoing COVID-19 pandemic. The flood, which ravaged several states, is causing a serious threat to the food and nutrition need of the nation.

The above scenario resulted in several millions of hectares of food crops especially, maize, rice, surghum, millet being destroyed and sources of livelihood of thousands of farming families lost.
The situation has compounded the food crisis caused by COVID-19 pandemic and security issues in the northern part of the country, the Minister of Agriculture and Rural Development, Alhaji Sabo Nanono, stated during the flag off of sales of the 300 metric tons fertilizer and distribution of other farm inputs to dry season farmers by the Nasarawa State government.

Nanono, who was represented by the director federal agriculture in the Federal Ministry of Agriculture and Rural Development, Hajiya Kharima Babangida, said: “For over a year now, the ministry has been responding to these challenges of food availability caused by the COVID-19 pandemic by supporting smallholder farmers nationwide with various inputs including certified improved variety of food crops such as rice, maize, surghum, wheat, orange, sweet potato, groundnut, soyabean, cowpea, yam, as well as cash crops such as cashew, cocoa, oil palm, sesame seeds, gum arabic, etc.”
“Others include herbicides, insecticides and agricultural machineries such as transplanters, reapers, power tillers, motorised sprayers, processing equipment. These palliatives are expected to alleviate the effect of the pandemic and ensure that they keep producing food in the country.”

Acccording to the minister, “the flood then came which ravaged and destroyed thousands of farm lands and property as well as lives across the country, therefore calling for urgent attention from the government to mitigate the negative impact of this, and to ensure that the country does not experience food shortage nationwide.”

“It is against this backdrop that the decision of the Nasarawa State government to launch the sales of fertilizer and distribute inputs to dry season farming is apt, very commendable and given the fact that one circle of food production can no longer sustain the growing population in terms of food and nutritional needs of our dear country hence concerted efforts in cultivation of dry season crops, “Nanono maintained.

It was in the same light that the agriculture minister said several development partners such as the FAO, the World Bank, IFAD, were supporting smallholder farmers in some states through the Federal Ministry of Agriculture and Rural Development with seeds, fertilizers and agricultural chemicals.

The interventions for the rice farmers in the state include 200 bags of certified rice seeds, 1,000 litres of herbicide, 800 bags of insecticides, 800 bags of NPK fertilizers, 400 bags of Urea fertilizers and 800 bags of soil amender.
Nanono, however, urged beneficiaries of those inputs to make judicious use of it in the dry season farming in order to produce food for the nation. He also hoped that the support would increase the county’s food and nutritional security, as well as enhance the smallholder farmers recover from the effect of the natural disasters.

“To increase the number and quantity of cassava planting materials, we are also establishing a Cassava Multiplication Centre at Adogi. And to support sheabutter processing, we are also establishing a Sheabutter Processing Centre at Shabu.”
The minister hoped that the Nasarawa State government would continue to support smallholder farmers with not only inputs, but also with infrastructure to ensure that the state maintains its enviable position in food production.

Welcoming guests to the event, the Nasarawa State commissioner for agriculture and rural development, Professor Alanana Otaki, said the sales of fertilizer and distribution of other farm inputs to the dry season farmers in the state was part of the fulfillment and commitment of Governor Abdullahi Sule to the development of agricultural sector being the major economic base of the state.

Acccording to Professor Otaki, “bearing in mind that the state has comparative advantage of all crops that are needed locally, nationally and internationally, the sales of these inputs are of utmost value and importance to the farmers and other major stakeholders in the sector aimed at boosting their agricultural activities.”
For the Nasarawa State chairman of the All Farmers Association of Nigeria (AFAN), Hon. Samuel Meshi, the flag-off of sales of the 300 metric tons fertilizer and distribution of other farm inputs by Governor Sule to the dry season farmers was another day the farmers of the state would not forget in a hurry.

He notes that it was because the day marked the beginning of a season the farmers were looking up to, “the day is not just only for dry season farmers, but for the entire farming community of Nasarawa State.”
He assured the people that Nasarawa State would never go hungry, as they would continue to support the programme and do the best they could to make sure that food security was uphold to the latter.