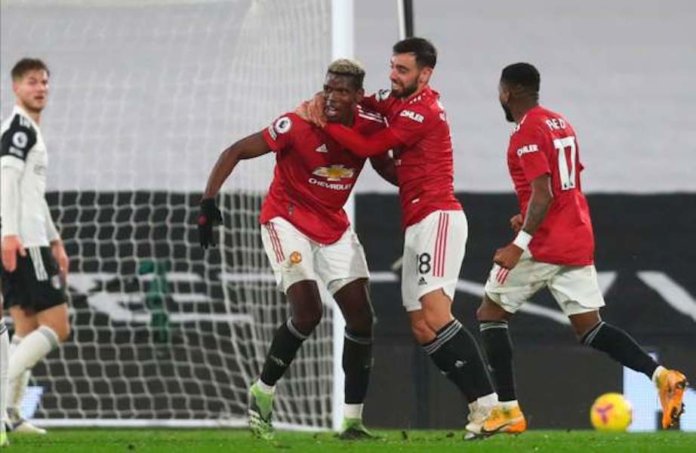 Paul Pogba scored a superb winner as Manchester United reclaimed top spot in the Premier League by coming from behind for a club-record equalling 2-1 away win at Fulham last night.

2-0 defeat of Chelsea, Manchester City toppled them when they defeated Aston Villa 2-0 to climb to the top on 39 points

But Manchester United did not allow the Etihad fans to savor that joy more than two hours when they whipped Fulham to reclaim the top spot on 40 points.

In what is becoming a familiar pattern for Ole Gunnar Solskjaer’s side outside Manchester this season, they fell behind early in the game, with Ademola Lookman beating the offside trap before firing in an angled drive just five minutes into the game.

But for the seventh time away from Old Trafford in 2020-21, United found a winning response to make it 17 games unbeaten away, courtesy of a gift from their opponents and a bit of magic from their French midfielder.

Goalkeeper Alphonse Areola has been a good addition for the Cottagers but in dropping Bruno Fernandes’ cross at the feet of Edinson Cavani, he gifted his former Paris St-Germain team-mate the simplest of equalisers.

And on the hour mark, Pogba stepped up to decide the contest, firing a superb angled drive across the diving Areola and into the far corner from 20 yards.

The win takes them to 40 points, two more than both Leicester and Manchester City, who had briefly taken top spot from the Foxes.

Solskjaer felt his side missed a big opportunity to fully assert their title credentials in failing to make the most of their chances in Sunday’s 0-0 draw at champions Liverpool.

United were clearly in no mood to repeat such a mistake at a wet and windy Craven Cottage on Wednesday against a less daunting and defining opposition, but one that is far more robust now than they were in the season’s first month.