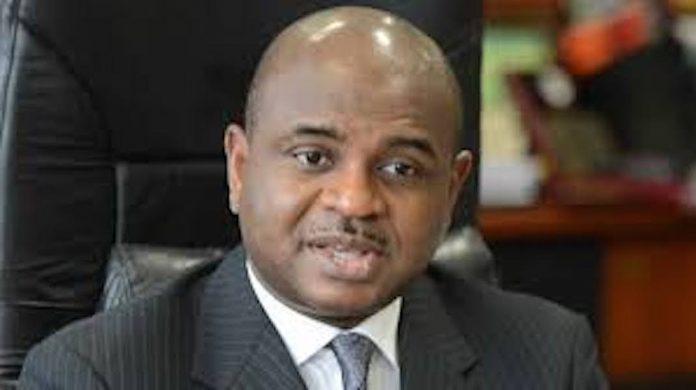 A former Central Bank of Nigeria (CBN) Deputy Governor, Prof. Kingsley Moghalu, yesterday called on the federal government to maximise the benefits of Nigeria being a $400 billion Gross Domestic Product (GDP) economy by broadening its internal revenue generation efforts rather than relying on public borrowings to finance its budget deficits.

Moghalu, during an interview monitored on ARISE NEWS Channel, the broadcast arm of THISDAY Newspapers, said Nigeria’s current national budget of N13 trillion has a N5 trillion deficit component, adding that the huge deficit would not have existed if the government had deepened its internal revenue mobilisation in the first place.

He said: “The budget, yes, is N13 trillion and N5 trillion of it is deficit. And the problem is how do you finance the fiscal responsibilities of the government?

“I have a problem with the way it is currently being managed. There is an overarching reliance on borrowing, borrowing and borrowing as a way to finance Nigeria’s budget deficit. Those deficits do not even need to exist in the first place, at least to a significant extent, if the government of Nigeria were to pursue effective revenue mobilisation from within its own economy.

“Nigeria has a good fortune of being a $400 billion GDP economy. The only problem we have is that all that is a fact but the lives of the poor Nigerians are not impacted in any positive way.”

He also highlighted the need to hinge Nigeria’s economy on a sound economic philosophical foundation to create a level playing field and work for the good of the markets and other economic actors.

Moghalu, who was the presidential candidate of the Young Progressive Party in the 2019 presidential election, stated that there is insufficient clear thinking going into the country’s economic policies decision making.

He said: “Economics of countries are built first of all on a strong philosophical foundation that guides the market place. We have not done this in Nigeria. We are not very sure of what Nigeria’s economic philosophy is.

“There is a very strong statist instinct in the current government since 2015 and that interferes with the efficiency of the market place. The government has a role, but the question is what that role is? In my view, that role should be to create enabling environment through effective regulation and policies. Then you let the market flow. But instead the government wants to determine many things, including the price of the naira to the dollar.

“And because of insufficient understanding of economics among the populace, many people feel that if the naira is one-to-one with the dollar then that is a wonderful thing.

“The naira can be one-to-one with the dollar. There is nothing wrong about that but on what basis? You have to be a productive economy and exporting finished goods with value to underpin the value of your currency. Right now, the value of the naira is determined only by the price of the oil, which as you and I know is a volatile affair. So, it is a no win-win situation for us.”

He also explained that the existing multiple exchange rates of the naira to the dollar was made possible by the rent-seeking appetite of the powers that be in the country’s politics.

“Nigeria’s politics is driven by a greed for power at the centre for the purposes of rent seeking.

There is a lot of rent seeking that is going on concerning the naira. If you keep the naira subsidies and create different kinds of exchange rates for different kind of businesses, you are not creating level playing field in the financial market.

“And there are people who profit from these arbitrage opportunities and many of them are powerful politically, connected people who have a very important influence on political decision making, which of course influences economic decision making. Our economy is suffering because of our politics,” Moghalu added.