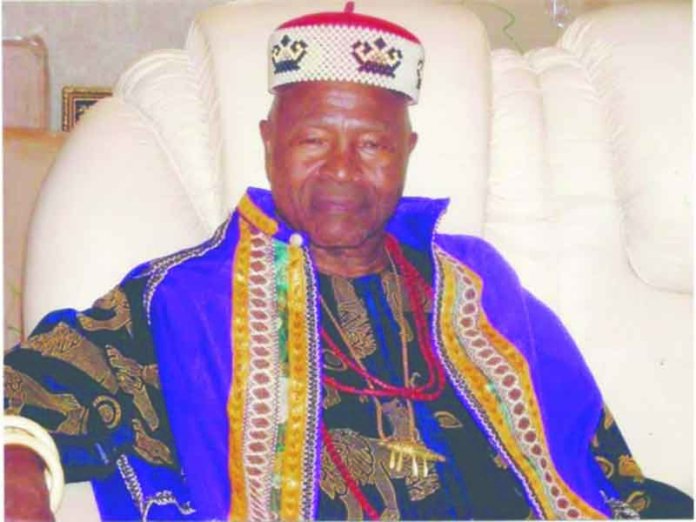 In every generation, community, race or society, once in a time, God almighty sows a titanic seed for a purpose. If properly harnessed and managed that seed in human form gives to the people a super human and intellectual service according to the divine design. Late Chief S.O. Mbanefo falls into this category of human creature. He was born on 4th August 1938 to the Mbanefo family of Umudiana Kindred of Ekwenanyika Village in Nri the Ancestral home of the Igbos. Mbanefo was a man of the people and consummate Christian. He was a politician, leader, traditional Man and a fulfilled Man. He was a man of valor in words, deeds, an advocate of action, justice and promptness. An orator, disciplinarian and epitome of elegance and intelligence, he was well recognized across the length and breadth of Igboland. He was admired by his people and he stamped his name on the sands of time in Nri and across Igboland in general
He attended St. Mary’s Primary School, Nri and Emmanuel Church School, Enugu-Ukwu between 1943 – 1954; a rare feat at the time.

He showed spectacular academic brilliance at school and this earned him the nickname President; a title which is not yet lost on his peers. After his primary education, the young Shedrach opted for textile business and was apprenticed to his kinsman Mr. Levi Okeke from Ekwenanyika Village who was a textile trader based in Onitsha. After seven years of apprenticeship, he gained his freedom and established his own textile business and rose from very humble beginnings to become a major distributor of the famed United African Company (UAC) Ltd. His flourishing textile business suffered a setback as a result of the Nigeria Civil War. Out of patriotic zeal, he enlisted and served with the International Red Cross in the defunct Republic of Biafra.

After the civil war and in view of the changing times, young Shedrach adapted to the changing situations by relocating to Awka Town the present capital of Anambra state where he established a successful block industry known as “Three Star Block Industry” and later he established Ozo Nwayo Bright Stores as a subsidiary support venture to his Block industry enterprise. It is a self-evident fact that young Shedrack excelled in his chosen profession and this enhanced his foray into identifying with traditional concerns of his people. In 1968, he took the Ozo title and choose the title name of Ozonwayo (gentle Chief) in tune with his gentle disposition.

In 1969 a year later, he was admitted into the esteemed Oba society which is acclaimed as the highest Chieftaincy Title in Nri Kingdom. Having distinguished himself as a social and moral crusader, it was not surprising that the elders of Umudiana considered him worthy as the true son, thereby bequeathing on him the headship of the struggle for emancipation of Adama people from the shackles of traditional despondency, captivity, and marginalisaion.

It is an incontrovertible fact that his unparalleled sterling qualities and patriotism were instrumental to giving the people of Umudiana an undisputed relevance in the scheme of things in Nri Kingdom. He was one of the greatest Ambassadors of the Igbo cultures and Traditions of our time and his death, no doubt is a big loss to the Ancient Nri Kingdom as a whole. His Charisma and leadership skills were some of the things many admired most about him. This explains why he was considered the right person to crown late Dim Odumegwu Ojukwu as Eze Igbo Gburugburu and Daddy Hezekiah (the General Overseer of Living Christ Mission) as Odum Ebo Ndigbo.