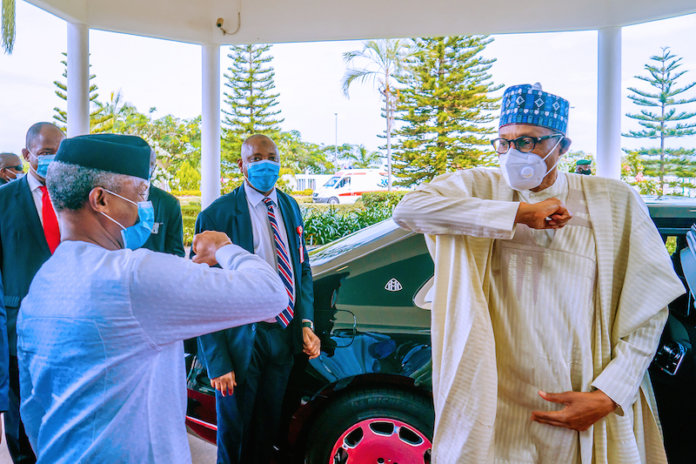 The federal government yesterday listed President Muhammadu Buhari, Vice President Yemi Osinbajo and the Secretary to the Government of the Federation (SGF), Mr. Boss Mustapha, among the first set of Nigerians to be administered with COVID-19 vaccines, when the country takes delivery of the first batch by the end of the month.

The Executive Director, National Primary Health Care Development Agency (NPHCDA), Dr. Faisal Shuaib, at the Presidential Task Force (PTF) on COVID-19 press briefing in Abuja, said their vaccination would be televised to inspire public confidence in the safety of the vaccines.

He had said on Tuesday that Nigeria was hoping to get 42 million COVID-19 vaccines to cover one fifth of its population through the global COVAX scheme.

He had explained that the initial vaccines would come as part of Nigeria’s plan to inoculate 40 per cent of its population this year and another 30 per cent in 2022, with shipment of 100,000 doses of the Pfizer vaccine due to arrive by the end of the month.
Shuaib, at yesterday’s briefing, however, said the federal government would prioritise the first set of people to be vaccinated.

“In terms of the prioritisation of vaccines and strategic country leadership, what it means that I had mentioned that we will like to see a situation where Mr. President, the vice president, the SGF and critical leaders come and take the vaccine in full glare of the public to demonstrate that this vaccine is safe.

“So, we have to make provisions for those. But even in developed countries, what we have seen is that apart from the prioritisation of health workers, you have to also identify critical leaders that you don’t want them to be wiped off by the virus. For example, in warfare, if you want to destroy your enemies, you look for specific leaders, captains, the generals, once you decapitate them, then the soldiers will become weak.
“So, as much as possible, you do not want to also leave your leaders vulnerable to COVID-19. It doesn’t mean you want to prioritise politicians, that is not correct. I emphasised during the last briefing that we will prioritise our health workers because they are the ones in direct contacts with cases in isolation units,” he said.

On how long the protection the vaccine is expected to offer will last, he said: “One thing that we are aware of is that this vaccine is new. So we do not have absolute information about how long they will last because the vaccines are just a few months old. It is only a question of time before we know exactly how long their immunity will last.”

Shuaib also spoke on the prevalence of the new COVID-19 variant, saying that so far, it is only in the United Kingdom that the new variant is observed to be more virulent.
In his speech, the SGF, who chairs the task force, appealed to state governors to provide the back-up enforcement for the health protection regulations, which the federal government is seeking to develop to support existing COVID-19 protocols and to strengthen compliance with non-pharmaceutical interventions.

According to him, the health protection regulations will be of universal application across all the states.
Mustapha, who lamented that the country is presently at a tipping point arising from escalating surge in the number of COVID-19 cases, noted that they are able to convince the governors to back the new laws through local enforcement, regulations and authorisation when they met yesterday.

He said: “We are working round the clock to ensure that things are in place with the support of the governors who are the principal officers in their states to ensure that something drastic is done to arrest this increase in number of states. During the last briefing, our number was 1, 304 but just two days after, it is 1, 664. I don’t know what figure I will come back with tomorrow. The picture I see is that the figure will keep rising and it has a correlation with the activities of last weeks.

“We are at a very critical stage in our national response and we will need the support of everybody to be able to navigate the picture of what PTF sees. The effect of the Christmas and New Year will begin to manifest in the second and third week of January and the figures are going to be high.“

He explained that the PTF is aware that the world is at a critical phase of infections and is constantly reviewing its strategy to emerging situations, especially in risk communication, vaccine hesitancy, fake news/disinformation.
He also called on the public to remain focused on the drive to reduce infection rate and make the country safe again.

He urged the states to enforce measures that will help to curb the effect of the virus on lives and livelihood.
However, the National Coordinator, PTF on COVID-19, Dr. Sani Aliyu, said the federal government has not ruled out imposing a fresh lockdown on the country if the numbers of new COVID-19 cases continue to surge.

He said the numbers they are seeing are reminiscent of the numbers they were scared of projecting at the beginning of the pandemic in March last year, warning that people should comply with non-pharmaceutical interventions as a collective responsibility if they don’t want another lockdown.

“It is extremely important we take compliance with non-pharmaceutical interventions as a collective responsibility whether we are in government or outside government because it is still a risk across the board to the public. Looking at the numbers we are currently having, even though there are situations where people say we are threatening to lock down, we are not threatening. We are saying if these numbers continue to go up and we start having sickness index, we have no option and if we don’t want to lockdown, now is the time to follow non-pharmaceutical interventions – wear face masks, keep your distance from people, if you have respiratory symptoms, keep away from the public and if you are vulnerable stay at home.

“The numbers we are seeing now are the sort of numbers we were afraid of seeing back in March/ April and unfortunately, that is now coming back to us. So we will continue to work closely with all agencies of government, knowing they will be responsible, especially the chief executives to our protocols and guidelines and we will continue to reach out to the governors to ensure that where there is a risk of crowd, control measures are put in place to stop transmission,” Aliyu said.

Also at the occasion, Minister of State for Health, Senator Olorunnimbe Mamora, announced the commencement of the federal government’s scheme on oxygen availability for all the states and the Federal Capital Territory ( FCT).

Mamora, who was represented at yesterday’s briefing by the Director, Hospital Services, Dr. Adebimpe Adebiyi, said the federal government had earlier approved guidelines for the implementation of oxygen available intervention plan to help in the treatment of COVID-19 patients.

He said:”Facilities will be prioritised based on the severity of the gaps identified such as degree of need or the degree of unavailability oxygen determines the first or early beneficiaries of the intervention.”
On the issue of vaccines, the minister said some countries have started rolling out vaccines, adding that Nigeria is exploring all available options to acquire vaccines for its people.