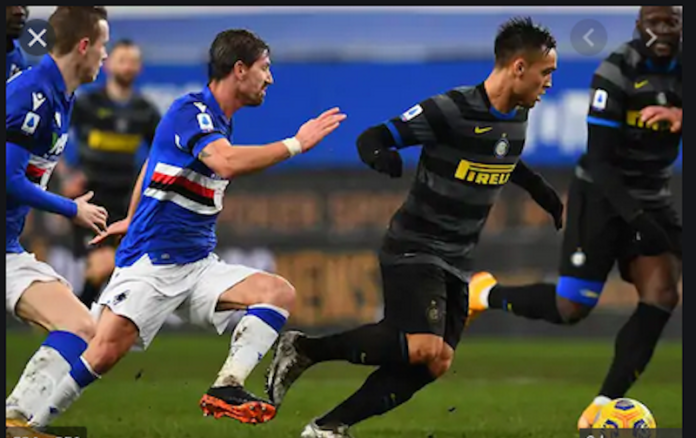 Alexis Sanchez had a penalty saved as Inter Milan’s attempt to keep pace with Serie A leaders AC Milan suffered a setback with defeat at Sampdoria.

The loss also ended Inter’s eight-match winning run in the league and leaves them on 36 points, one behind Milan, who host Juventus later (19:45 GMT).

Antonio Candreva, on loan from Inter, and Keita Balde scored for Sampdoria.

Stefan de Vrij reduced the deficit with a header after Sanchez saw his first-half spot-kick kept out by Emil Audero.

Ashley Young struck the crossbar with his follow-up on what was a frustrating day for Antonio Conte’s men, who had 24 efforts on goal.

The first was overturned in Inter’s favour, when VAR judged that Lautaro Martinez had handled outside the area. The second resulted in a spot-kick for the visitors after midfielder Morten Thorsby was deemed to be guilty of handball.

Sampdoria’s Candreva made no such error with his penalty, after VAR confirmed Nicolo Barella had handled in the box. Seven minutes before the break, Keita swept in a second following superb work down the right from Dane Mikkel Damsgaard.

De Vrij gave Inter hope with a stooping header in the 65th minute, but Conte’s side failed to make another breakthrough despite intense pressure.

Belgian striker Romelu Lukaku, the club’s leading scorer in Serie A this season with 12 goals, had a header clawed away by Audero while Ivan Perisic, another substitute, sent his header over the bar.

Claudio Ranieri’s resilient Sampdoria held on for their first league win over the visitors in four years.

Elsewhere in Serie A, Roma kept the pressure on the front-runners with a 3-1 win at basement side Crotone, who conceded six goals against Inter last weekend.

Sassuolo bounced back from their 5-1 loss at Atalanta to defeat Genoa 2-1 thanks to Giacomo Raspadori’s winner seven minutes from time. They now have 29 points from 16 games, only four points behind third-place Roma.

Atalanta are a point behind them following their 3-0 win over struggling Parma.