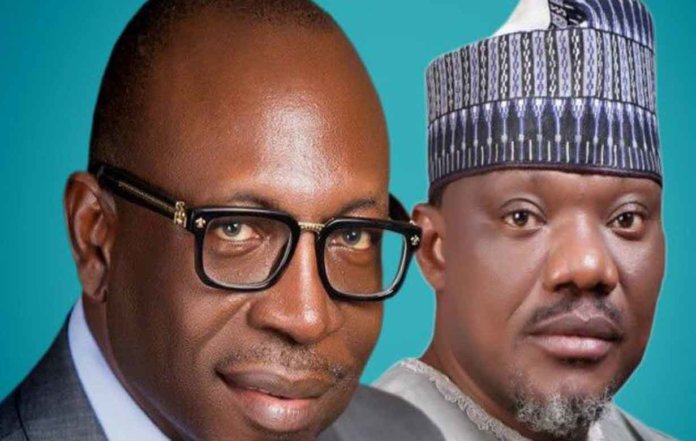 Adibe Emenyonu in Benin City and Alex Enumah in Abuja

The Edo State High Court, sitting in Benin-City, yesterday nullified the candidacies of the governorship candidate of the All Progressives Congress (APC), Mr. Osagie Ize-Iyamu and his running mate, Audu Ganiyu Abudu, in the September 19, 2020 election.
Abudu was accused of presenting false information to the Independent National Electoral Commission (INEC) in his Form EC9 to enable him to contest the governorship election.

The case was brought against Abudu by the plaintiff, Hon. Sunday Kadiri from Ogbona ward, in Etsako West Local Government Area of the state.
The plaintiff had asked the court to disqualify Abudu from participating in the election on account of having allegedly given false information to the electoral commission to aid his qualification.
He prayed the court to annul the candidacy of Ize-Iyamu as the APC candidate because he was paired with an unqualified candidate as a running mate.

In his judgment, Justice Courage Ogbebor nullified the candidacy of Ize-Iyamu and Abudu.
Reacting to the judgment, Ize-Iyamu described the judgment as unfortunate and utterly wrong and urged his supporters to remain calm and law abiding.

He said he has instructed his lawyer to appeal the judgment because he is convinced that the Court of Appeal will reverse it.
“I have received the news of the judgment delivered today, 6th day of January 2021, by the Edo State High Court, sitting in Benin City, disqualifying me and my running mate, Hon. Gani Audu Abudu, from contesting the gubernatorial election held in Edo State on 19th September 2020.

“This judgment, to say the least, is unfortunate and utterly wrong.
“I have already instructed my counsel to appeal against the judgment as I am convinced that the Court of Appeal will dispassionately consider the facts presented before the court and arrive at a just decision in accordance with the law.
“I urge all my teeming supporters to remain calm and law abiding. Justice will surely prevail in this matter,” Ize-Iyamu stated
Yesterday’s judgment came three weeks after the Federal High Court, sitting in Abuja, had dismissed a similar suit seeking to disqualify Ize-Iyamu’s running mate from the election.

The suit, marked FHC/ABJ/CS/758/2020, was filed by the Action Democratic Party (ADP) which alleged that Audu presented forged documents to INEC.
The plaintiff also alleged that the documents contain misleading discrepancies, especially in name arrangement.
Ruling on the matter, however, the court dismissed the suit with cost to the plaintiff.

Meanwhile, while the judgment was ongoing in Benin-City, Justice Ahmed Mohammed of the Federal High Court, sitting in Abuja, adjourned till today, hearing in the alleged certificate forgery suit against the state Governor, Mr. Godwin Obaseki.
The adjournment was for parties to adopt their final written addresses as their briefs of argument in the suit, which expires on Saturday.

The All Progressives Congress (APC) and one of its chieftains, Mr. Williams Edobor, had gone to court accusing Obaseki of allegedly forging his University of Ibadan (UI) certificate he submitted to INEC in aid of his qualification for the governorship election in the state.

The plaintiffs in the suit filed on July 14, 2019, want the court to disqualify Obaseki and his party, the Peoples Democratic Party (PDP), from the poll if the governor was found to have forged his university certificate obtained from UI in 1979.
Obaseki had won the election on the platform of the PDP while the APC with its governorship candidate, Mr. Osagie Ize-Iyamu, came second.

Sued alongside Obaseki and the PDP is the electoral umpire, INEC.
In proving their allegations, the plaintiffs called in a total of six witnesses, including two associate professors, who tendered their individual certificates obtained from the University of Ibadan in 1978 and 1979 respectively.
But in his defence, which started on Tuesday, Obaseki called three witnesses, among whom is the Deputy Registrar, Legal, University of Ibadan, Mr. Abayomi Ajayi. Ajayi told the court that the mere fact that some parts of the original of Obaseki’s degree certificate from the UI were missing in the photocopy he attached to his forms EC9 and 001 to INEC did not amount to forgery.

His first witness, one Charity Aguobawekhina, who claimed to have made the photocopy for Obaseki, also explained that the absence of the name of the registrar and date of issue in the photocopy was as a result of improper photocopying process.
At Wednesday’s proceedings, the first defendant also called another witness from UI, Prof. Eghosa Osaghae, a Professor of Comparative Politics.

The professor who was appearing in the matter as a subpoenaed witness, tendered a Certified True Copy (CTC) of a Bachelor of Science degree certificate in Political Science that was awarded to him by the University of Ibadan on July 6, 1979.
The certificate was admitted in evidence and marked as Exhibit D18.

Under cross-examination, the witness told the court that he is aware that the original size of certificate of University of Ibadan is bigger than an A4 paper size.
“I know for a fact that when A4 paper is used to photocopy a certificate, all the information on the certificate will not be captured.

“I know this because I had a personal experience trying to photocopy an original certificate with an A4 paper”, he said.
He told the court that the copy of his own certificate that was tendered in evidence was photocopied with a paper that was bigger than A4 paper, adding that it was the reason why all the information was captured.

However, after the witness was discharged from the witness box, lead counsel to Obaseki, Mr. Ken Mozia (SAN), who had on Tuesday told the court that he had five witnesses lined up to defend his client, announced that he would not be calling other witnesses who though were around the court premises because of want of time for the determination of the case.

Raising similar concern for want of time, counsel to the PDP, Mr. Rasaq Isenalumhe, informed the court that he would also not be calling any of the witnesses scheduled for the case “in the interest of justice”.

According to the judge, going by the law, the 180 days for the hearing and determination of the suit end on Saturday.
Following the non-objection by the plaintiffs, Justice Mohammed stood down the case for a few minutes to enable counsel agree on how best to go in the case.

When the matter resumed some minutes later, plaintiffs’ counsel, Chief Akin Olujimi, (SAN), who spoke on behalf of other lawyers, informed the court that they have “agreed to prepare, exchange and file written addresses which they will adopt on Thursday afternoon.”
His position was confirmed by other lawyers in the suit and Justice Mohammed subsequently adjourned till today for parties to adopt their final written addresses.